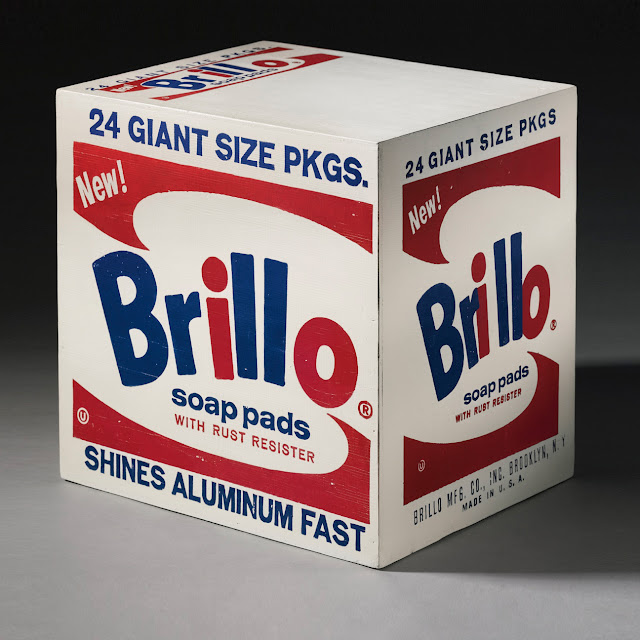 Andy Warhol 'Brillo Soap Pads Box' Silkscreen Ink and House Paint on Plywood 17 x 17 x 14 in. 43.2 x 43.2 x 35.6 cm. Executed in March - April 1964. Executed by Andy Warhol between March and April in 1964, Brillo Soap Pads Box is a paradigmatic example of a sculptural series that was one of the artist’s most ambitious undertakings of the period, and represents a motif that became absolutely synonymous with Warhol and the Pop Art movement in the first half of the 1960s. Indeed the Brillo Boxes became a central constituent of major exhibitions through the decade as an omnipresent totem of Pop, from Moderna Museet in Stockholm; the Stedelijk in Amsterdam; the Kunsthalle in Bern; Kunstnernes Hus in Oslo; the Neue Nationalgalerie, Berlin; the Institute of Contemporary Art, Boston; the Vancouver Art Gallery, and the Pasadena Art Museum. 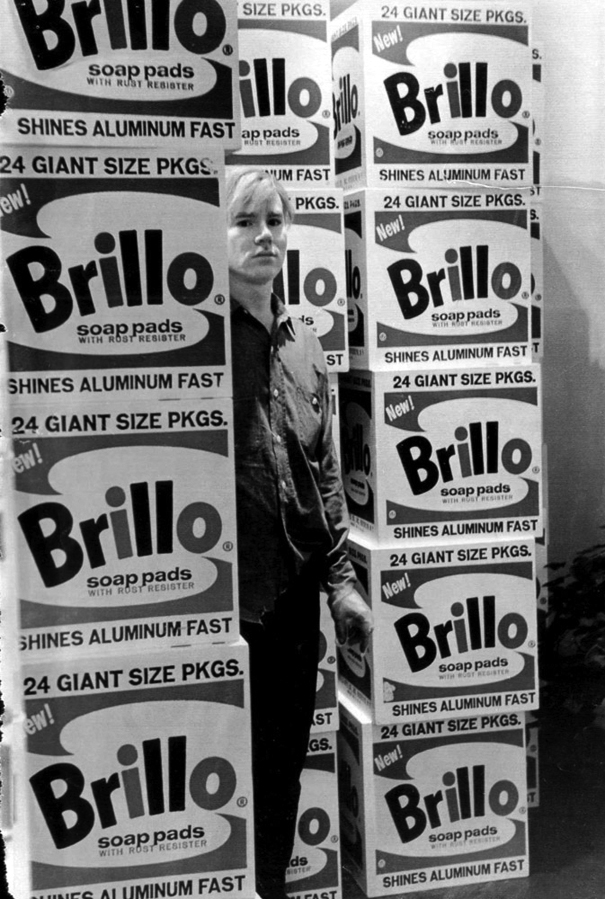 However, the pictured work above belongs to the very inception of the series, which was first unveiled for Warhol’s second exhibition at the Stable Gallery between April and May 1964. The cycle of sculptures created for the Stable show precipitated new working methods in Warhol’s Factory, and moreover a wider reassessment of accepted traditions of artistic practice. As Georg Frei and Neil Printz have noted, “The Stable installation vividly demonstrates the radical character of the transformation in Warhol’s work at the beginning of 1964. Painted compositions cede at this time to serial accumulations of objects, whose quantity and likeness undermine conventional orders of number, composition, and visual distinction.” (Georg Frei and Neil Prinz, eds., The Andy Warhol Catalogue Raisonné: Paintings and Sculptures 1964-1969, Vol. 02A, New York, 2004, p. 55) Thus it is no exaggeration to describe the present work as the vestige of a key revolution that took place in modes of artistic creation with resounding and profoundly influential effects on wider perceptions of artistic authorship and indeed the very nature of the authentic art object. 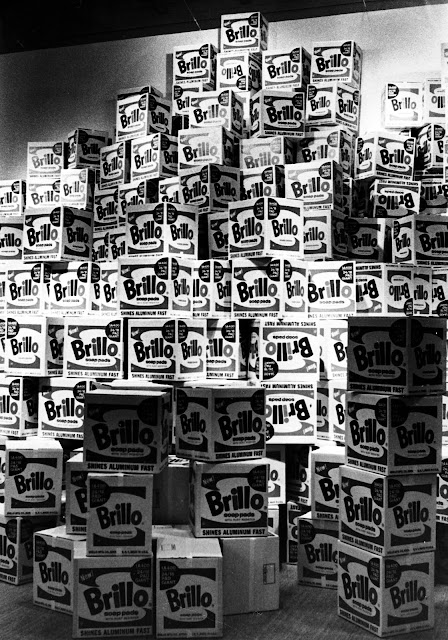 The conceptual genesis for a box sculpture series was rooted in Warhol’s 1962 creation of a three-dimensional version of the Campbell’s Soup Can, and of course Brillo Soap Pads Box is the perfect continuation of Warhol’s appropriation of commercial products and advertising design. However, with this series his critical departure is to carry his conceptual project into three-dimensions, taking the wooden box constructed by a contracted cabinetmaker, painting it in white house paint and then silk-screening the red and blue layers on the top and four sides. The sculptural nature of the object brings Warhol’s provocative art of appropriation even closer to the Duchampian readymade prototype that cast such an important shadow. However, while Duchamp’s was purely an art of re-presentation of found objects, Warhol creates handmade counterparts in an alternative medium to the mass-produced packaging. In this respect Brillo Soap Pads Box drew greater inspiration from Jasper Johns’ groundbreaking sculpture Painted Bronze of 1960, where two bronze cylinders are painted to resemble Ballantine beer cans. Navigating the threshold between artistic creation and wholesale appropriation, Warhol’s Brillo Boxes and their widespread international exhibition provoked rapt attention and controversy at the time, which naturally only made their celebrity even more pronounced. The series, as epitomized by the present work, is recognized as a major chapter in the history of Pop Art and, viewed from our perspective today, the subsequent influence of the Brillo Boxes on movements such as Minimalism, where seriality and industrial manufacture became standard benchmarks of artistic practice, readily testifies to the true significance of this body of work.


Andy Warhol is one of the preeminent artists of the 20th century, the 1960s marking the years in which he created some of the most iconic works of art ever produced. In 1963, Warhol moved to a new studio which quickly became known as “The Factory.” The name of the studio was emblematic of the type of work Warhol produced there, using popular images of celebrities and mass-produced objects to challenge the status quo of what was considered art. The works depicted subjects at the forefront of popular and consumer culture such as Marilyn Monroe, Jacqueline Kennedy, Campbell’s soup cans, and the Brillo Box. Warhol will forever be known as the man who blurred the line between mass-produced consumer objects and the canon of fine art, changing the conventions of art and the market in which it exists. Warhol continued to utilize mainstream figures andobjects in his work until his death in 1987. Pop art challenged the tradition of aesthetics by transforming images of mass-produced commodities of popular culture into fine art displayed in a gallery. By completely dislocating the image from its context and isolating it as an autonomous object, a commodity became a receptor of thought and reconsideration. Andy Warhol was the leading figure of this revolution in thought and aesthetics. Pop artists were using paint and mediums in entirely new ways to challenge the essence of art, dripping it, splashing it, and even entirely submerging objects with images in order to cast them in new light. Objects that would normally be ignored for their banality were screaming for attention through their unusual display. It was an attempt to expose the truth of a mass consumer culture. Warhol posed questions that could no longer be ignored. In 1964 Warhol exhibited his first series of Brillo Boxes at a solo show at New York’s Sable Gallery alongside other boxes meant to replicate the packaging for Del Monte Peach Halves, Campbell’s Tomato Soup, and Heinz’s Ketchup.

Each of the boxes was constructed of wood in the dimensions of the actual box with the label from the respective brand silk-screened on its surfaces. To the viewer, the boxes looked just as one would find them in any store. Warhol also utilized unusual methods of display for both the Campbell’s Soup Cans and the Brillo Boxes in order to link them back to the original product as much as possible. The Soup Cans were displayed in a continuous row, as they would be in a grocery store shelf. The Brillo Boxes were a three dimensional extension of what Warhol had done with the Campbell’s Soup Cans, stacked in columns just as if they were for sale. By displaying his works in a nontraditional format Warhol was removing them even more from the realm of the traditional art world. The utilization of such ubiquitous household brands revealed the “commercial framework behind the pristine spaces of the art gallery and art museum, while rubbing the nose of high culture in the mundane disorder of the supermarket stockroom” (P. Walsh, “Brillo Boxes,” Andy Warhol Foundation for the Visual Arts, 1998). Not surprisingly, such novelty was not immediately received positively. Many critics of the show felt that as an artist, Warhol should be creating images of his own instead of replicating the images of others, especially those created as labels for commercial products. Critics of Warhol’s work believed that such utilization of such labels degraded the seriousness of art.

Warhol’s Brillo Box “made the form of that question finally and forever clear: how is it possible for something to be a work of art when something else, which resembles it to whatever degree of exactitude, is merely a thing, or an artifact, but not an artwork? Why is Brillo Box when the Brillo cartons in the warehouse are merely soap-pad containers?” (A.C. Danto, “Andy Warhol: Brillo Box” Art Forum, New York, 1993). A new philosophical question regarding the aesthetics and future of art was launched. Warhol’s boxes continued the debate sparked by the use of the ready-made: whether the context in which an object was created and displayed is enough to categorize it as art. While Warhol’s box sculptures seemed to raise the same questions brought up by works such as Marcel Duchamp’s Fountain, the essential difference, of course, is that Warhol’s boxes were not found objects at all, but hand-made objects, meticulously recreated in another medium. With this project, Warhol further blurred the line between the ready-made and traditional art by engaging in recognizable artistic production, but only in his replication of a mass-produced consumer object. Warhol was not only furthering the debate about the place of the ready-made in the art world introduced by Duchamp, he was also expanding on the ideas he had explored in his variations on Campbell’s Soup Cans. While the Soup Cans had been heralded as revolutionary for their use of consumer objects as subject matter, Warhol went a step further with the Brillo Boxes. Though the Soup Cans introduced a new practice of the obvious utilization of generic commodities, they were still executed in a more traditional medium of paint on a canvas. Warhol’s Brillo Boxes, though crafted out of wood, look to the viewer exactly like the boxes one would have found in the store. With this work, Warhol forced the public to expand their notion of what constitutes art even further by making his art appear all the more commercial and even superficial. There is one key difference between Warhol’s work and the products after which they were modeled: Warhol’s boxes were empty. By leaving the boxes empty of the products with which they are labeled, he makes a subtle, yet powerful comment about the importance of the image and of advertising in the modern world. Through this piece Warhol seems to be arguing that it was not the items themselves that mattered but rather how they were packaged and what image they portrayed. This piece is an emblem of Warhol’s mission to challenge the notion of what defined art and the attitudes it provoked. Warhol is synonymous with the Pop Art movement, and the present lot makes it clear why. With this exemplary piece, Warhol utilizes the mass produced product by removing it from its intended context and reinventing it as an object of art, a sculpture. In keeping with the Pop movement, Warhol essentially brings life and art in closer proximity, radically altering the definition and boundaries of art forever.
andy warhol andy warhol art art by andy warhol modern art modern art for sale pop art