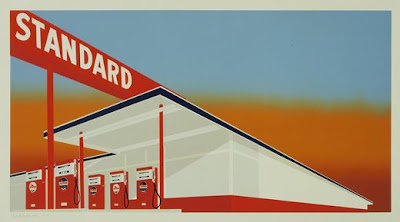 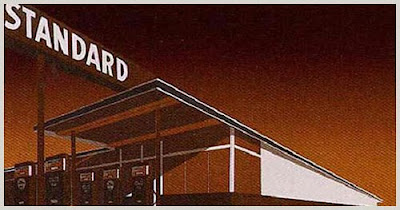 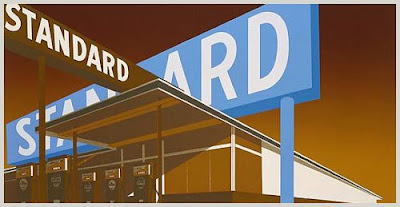 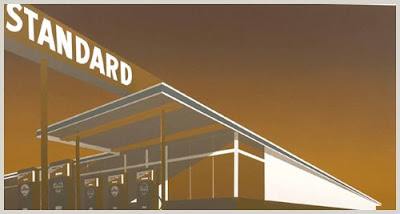 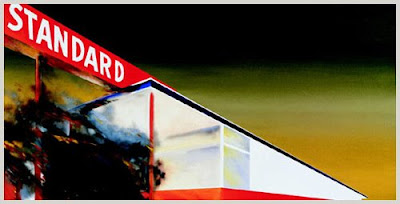 Edward Ruscha's Modern Standard Station represents the epitome of beauty in modern form can be found during the mid 1960's; when Gas was only 28 cents a gallon and employees served you in all-white uniforms too! The Standard Station screenprints by Edward Ruscha have always been our favorite ever since we noticed them at the Museum of Modern Art in New York. Edward Ruscha created them in 1966. They are the perfect example of the clean-lined less is more type of modern architecture we adore. They exist in several color variations as well. So stardust modern design has been trying to list most of them on our blog.

If you love this print as much as we do, we suggest to rent the French movie Les Parapluies de Cherbourg by Jacques Demy which stars Catherine Deneuve and Nino Castelnuovo. You can see the wonderful opening of this movie on youtube. What makes this movie so special is the incredible balance of mind-blowing color throughout the movie. And for the final act in this movie, check out the gas station which resembles the Standard Station by Edward Ruscha with a hint of Andy Warhol's Campbell Soup. All of the above are unique gems of art, Edward Ruscha's Standard Station (1966), Les Parapluies de Cherbourg (1964) and Andy Warhol's Campbells Soup (1962). Somehow, they all came together, one after another within a brief period of 1962-1966. We are pretty sure that Edward Ruscha, Andy Warhol and Jacques Demy never met each other. Yet, Andy Warhol was a fan of Edward Ruscha (he noted in his diary in 1982: "It was a scorcher. Went to the Whitney Museum (admission $4). Saw the Ed Ruscha show, which was interesting." Sure, something must have seriously clicked with Andy Warhol when he saw the Standard Station serries. 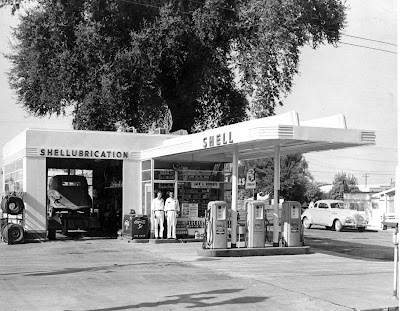 Above, check out this orginal Shell station during the early 1950's.
Gas was at 28 cents a gallon and employees served you in all-white uniforms too.