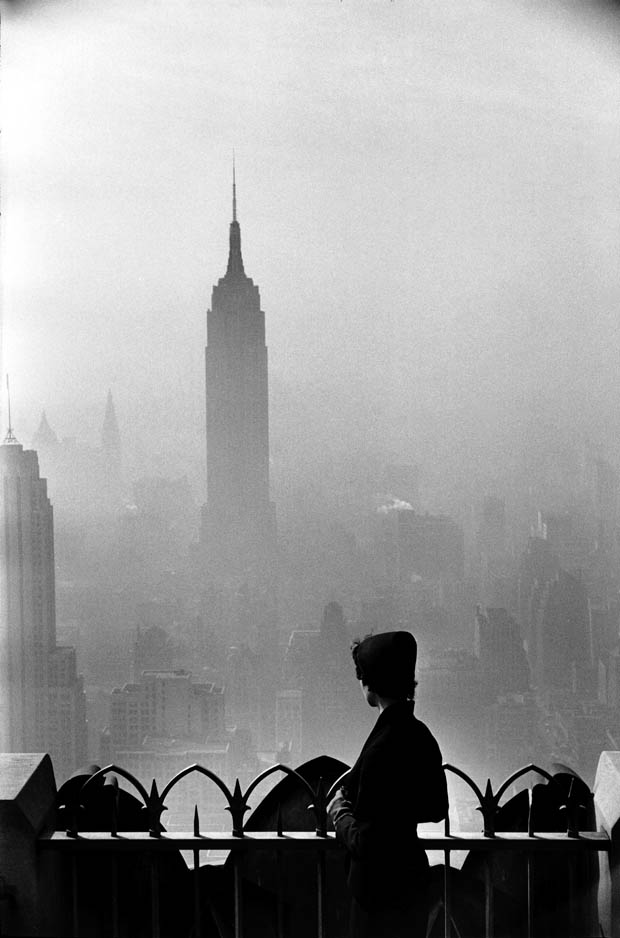 The Empire State Building viewed from the RCA Building, Rockefeller Center, on a misty or perhaps smoggy day, with a fashionably dressed young woman silhouetted against the scrim of atmosphere. The spikes of the railing iterate the spires of the towers in the distance.

Elliott Erwitt (American, 1928- ) was born in Paris to Russian émigré parents. He spent his formative years in Italy and France before moving to Los Angeles via New York in 1939. He studied photography at Los Angeles City College and in 1946 met Edward Steichen, Robert Capa and Roy Stryker who became significant mentors. From 1948-50 he went on to study film at the New School for Social Research before enrolling in the US Army. Upon his release from the military Erwitt settled in NYC and became a member of Magnum Photos, the agency of which he is still an active member. Erwitt has continued to travel and photograph throughout his life, capturing the famous and the ordinary, the strange and the mundane in his own unmistakable, often humorous style. His books, journalistic essays, and advertisements have been featured in publications around the world and his work has been exhibited at such museums as the Smithsonian, MoMA, Kunsthaus in Zurich, and The Art Institute of Chicago.
black and white photography famous photographers icons of photography modern photography new york photography photographers photography by elliott erwitt