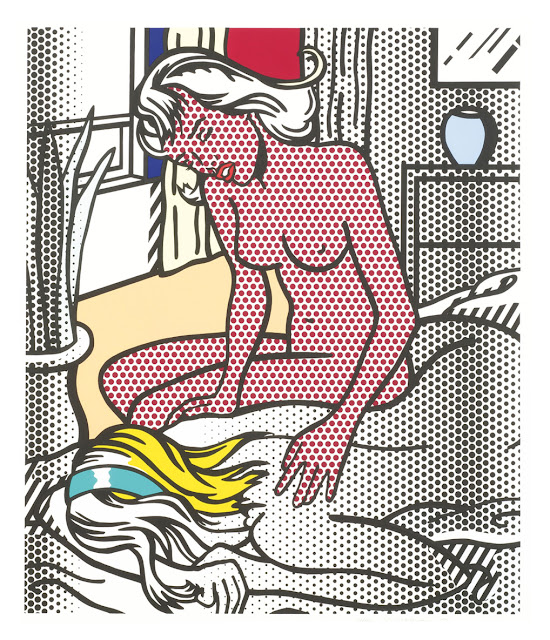 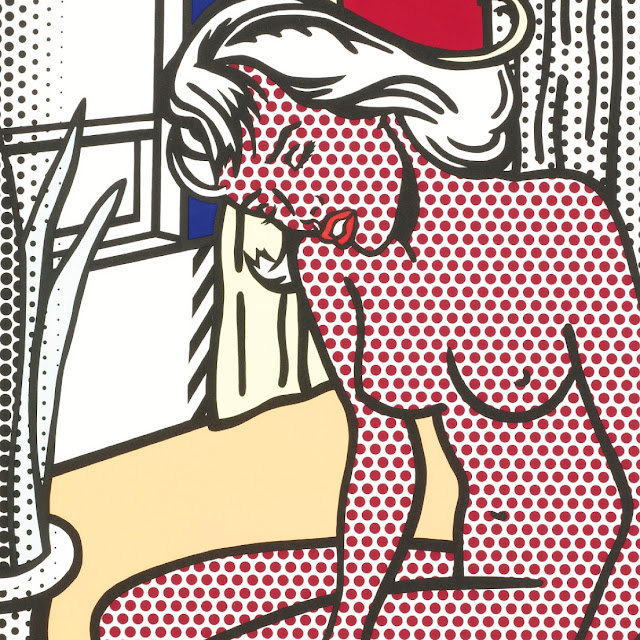 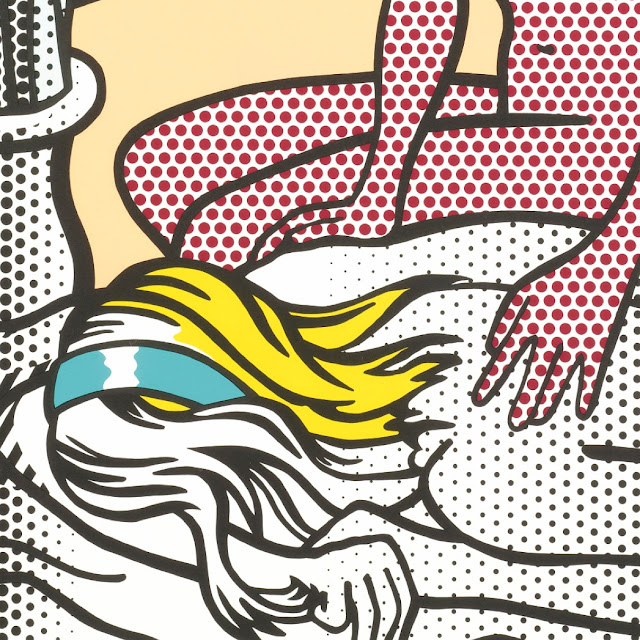 Anatomy of a Classic
Roy Lichtenstein Two Nudes from 1994

One of the recurring themes in Roy Lichtenstein's oeuvre is his brilliant nude series.  A perfect addition to any home, Roy Lichtenstein's majestic Two Nudes is a late and impressive relief print in colors by one of the brightest lights of the Pop Art movement. Executed in 1994, the work represents an extraordinary synthesis of many of the artist's previous concerns, displaying reflections; mirrors, interiors configured as a sensual Still Life, as well as a depiction of two attractive female nudes that, in their sexy pose and coy expression, recalls the artist's earlier leading ladies from his Cartoon paintings. In its construction, Two Nudes quotes the triumphs of the past, whilst inciting an art historical dialogue with the Modern female nude as denoted by a formal parity with Henri Matisse's Nu rose, intérieur rouge (Pink Nude, Red Interior) from 1947. The complex composition of the present work positively vibrates with life: the product of a nexus of the most graphic of visual sensibilities with a delight for unadulterated colour. With age, Lichtenstein seemed to challenge himself; thus, the present composition betrays a spatial dynamic that takes time for the viewer to negotiate. The flatness of the surface remains constant, but the journey we take to grasp any sense of meaning takes a little longer, and, indeed, is more rewarding. Dominating the work is the image of two loving female figure; their pale blond, wavy hair spilling out over their slender bodies, thus drawing attention to their naked torsos, arms and suggestively hiding their most intimate parts; there...we've said it without actually saying it.

There are countless source materials for these figures, most of them being old cartoons, so that Lichtenstein, at the end of his life, created paintings in much the same way he had thirty-five years before. However, unlike in the past, the present female nudes are an amalgamation of several sources. Their hair from one cartoon strip; their pose being formed by another. Primary colors of yellow, red and blue prevail on the white surface, built up, yet simultaneously broken down through Roy Lichtenstein's employment of Benday dots and stripes. The simplicity of his technique lends his works a fresh vitality, as if, through Roy Lichtenstein, their voices can be heard once more. Indeed, Lichtenstein had made works in the early 1960s, which were interpretations of works by Picasso. His idea of making 'art about art' was thus not new, but in this work, his technique and concept has become more programmatic and dedicated. Working in concert with these structurally strong lines and graduated succession of Benday dots (to evince a sense of atmosphere, as successfully employed in the series of Chinese Landscapes) is a more descriptive, curvilinear line that powerfully evokes a sense of bodily flesh or the softness of a plump cushion. The vertical thrust of the Benday dots acts as a veil of colour over the surface, lending dimensionality to the figure's body as well as the furniture.

Roy Lichtenstein's Two Nudes is a Relief Print in Colors, 1994, on Rives BFK mold-made paper, signed and dated in pencil, numbered 'AP 9/12' (an artist's proof, the edition was 40), published by Tyler Graphics, Ltd., Mount Kisco, New York, with their blindstamp and workshop number in pencil on the reverse.