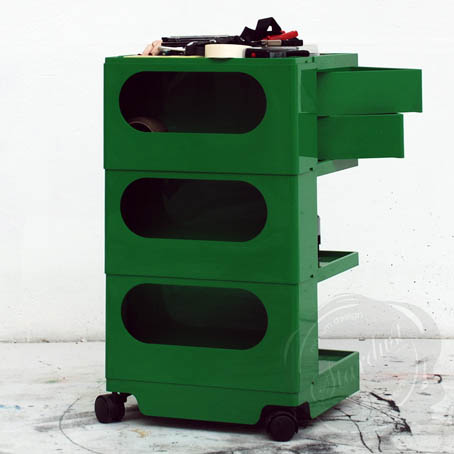 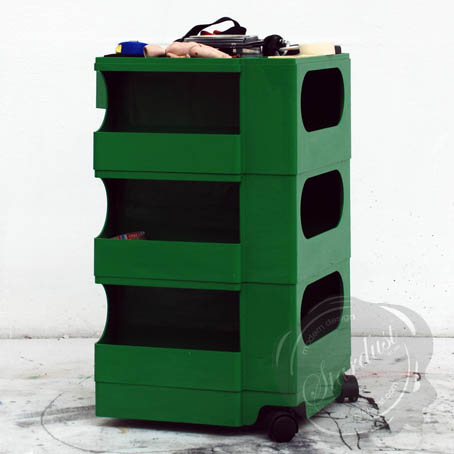 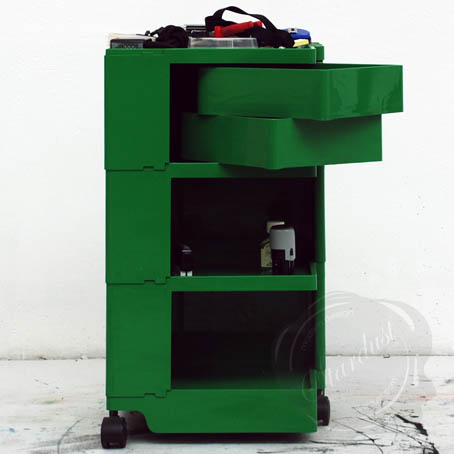 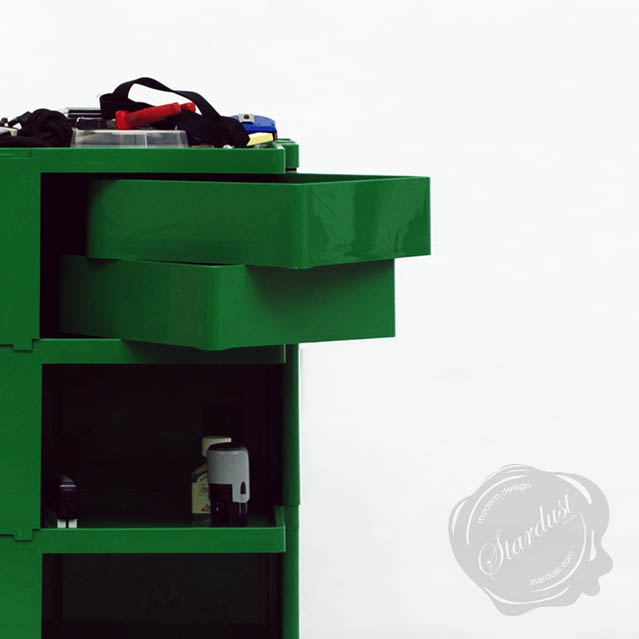 This hard-to-find green Boby trolley storage by Joe Colombo was recently offered by Caioplinio Design in Italy, unfortunately this color is no longer in production. Fans of this design classic do not despair: the Joe Colombo Boby Trolley is still available in the US through design purveyor Stardust Modern Design in several colors including white, black, orange and red. Boby is a trolley storage unit which has made its mark on history, mainly due to its outstanding versatility. Originally designed as an accessory for drawing tables, over time it has become an object for everyday use to hold either work tools or household utensils thanks to its vertical modularity and great capacity. one of the most esteemed abstract space age expressionists and greatest product designers of the 20th century joe colombo belongs to the generation of italian artists who completely revolutionized the essence of abstract italian 1950s designs. his stylistic evolution, from a figurative visual repertoire to an abstract almost sensual style rooted in the active relationship of the observer to the designs, embodied the radical vision of a renaissance in designs. colombo characterized this relationship as "a reflective modern experience between chair, lamp or any product for that matter and onlooker." his colour formations as featured in visiona and liquid light projections in notorious decadent clubs in milan during the 1960s indeed draw the observer into a space filled with an inner luminosity of higher human beings; a space age feeling of floating images and federico fellini movies but perhaps also the timeless 2001; a space odyssey.

colombo always resisted attempts to interpret his designs like other designers such as verner panton or eero aarnio. joe, as his friends called him, was mainly concerned with the viewers experience, the merging of art work and beholder beyond verbal comprehension. colombo was an intellectual, a thinker, a highly educated pipe-smoking man. he loved music, movies starring marcello mastroianni and giulietta masina. he loved literature such as the futuristic barbapa series that featured biomorphic space age architecture and was very involved with complete living designs, especially in the works of the libertine (la matriarca; a.k.a. the matriarch): a 1969 italian film directed by pasquale festa campanile. He also read ancient greek philosophy, mythology and roman history. colombo was a protagonist within the movement of italian designers who became known as the industrial design group of milan. first formed in milan after the ending of italy's post war economic boom years, this group was also called the italian design school. in all the history of art, they became the first italian artists to receive international recognition as a significant movement. many among them, including colombo, have become legendary figures. The structure and drawers are made from green injection-moulded ABS plastic, while the casters are made of polypropylene. Awarded first prize at SMAU in 1971. Part of permanent collection of the Museum of Modern Art in New York and Triennale in Milan.  The original artist tool since the 1960s; this still looks as stunning today as on the day it was created.