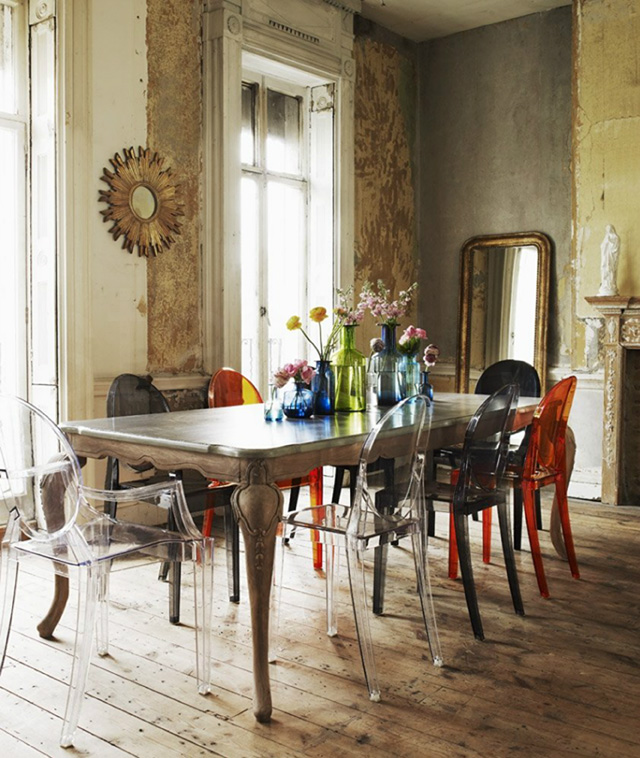 Mix it up Italian Style with the Kartell Chairs.  This traditional Italian farmhouse makes use of the contemporary modern Victoria Ghost Chairs and the Louis Ghost Chairs around a classic wooden dining table.  starck has recently promoted the ethos that honesty and integrity should be at the core of design. products should not created as 'throw away artifacts', only surviving for as long as they remain in fashion but should ideally have longevity and durability. he believes that as designers we need to be both honest and objective. products designed by starck can be seen on display in the collections of a number of european and american museums, among them the brooklyn museum in new york, the musée des arts décoratifs in paris, and the museum of design in london. exhibitions of his work, either alone or in conjunction with that of other designers, have been held, among other places, in paris, marseille, rome, munich, düsseldorf, kyoto, tokyo, chicago, los angeles, and new york. phillipe starck is on of the best-known contemporary designers in the world. he has not only received public acclaim for his amazing building interior designs but has also proved to be an accomplished architect and product designer. philippe starck was born in paris on 18th january 1949 the son of an aircraft designer, it is he who probably inspired the young starck. even at a very early age starck showed enthusiasm for design. starck lives and works in paris. much of his work produced in the 1980's and 1990's was influenced by fashion and novelty. it has even been referred to by some as being 'overdesigned'. in the 21st century his approach to design seems to have changed. in the field of industrial design, he has been responsible for the creation of a wide variety of objects in the o.w.o. series, noodles for panzani, boats for beneteau, mineral-water bottles for glacier, kitchen appliances for alessi, toothbrushes for fluocaril, luggage for vuitton, "urban fittings" for decaux, office furniture for vitra, as well as vehicles, computers, doorknobs, spectacle frames, etc. starck´s work has brought him numerous prizes and awards. in addition to all of the above, during the 1980s starck designed numerous collections. he also created individual items of furniture to be manufactured by firms all over the world... Philippe Starck's Louis Ghost is a daring yet beautiful example of mixing modern design in classical home decors.