Nastassja Kinski and the Serpent by Richard Avedon in 1981 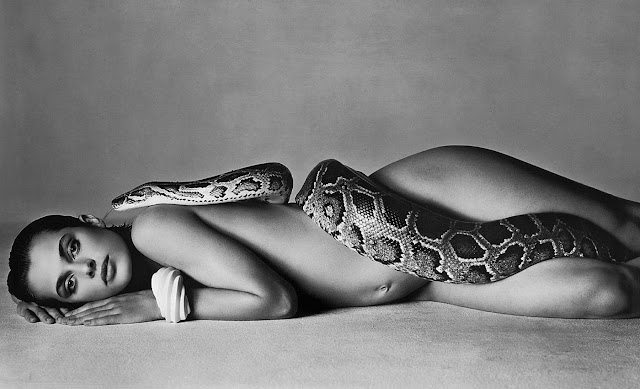 Nastassja Kinski and the Serpent as captured by Richard Avedon on June 14, 1981
Gelatin Silver Print, Printed 1982

It was an extraordinary, sexual, seductive, special and rare moment...and Dick Avedon caught the one time that snake kissed her ear....

"When you look at the photograph it all looks so easy... she spent two hours on a cement floor naked.  The snake...  the trainer would start anchoring the snake with her ankles and see where the snake would go... hoping that the snake, cause there is no talking to the snake, would creep up in a way that was beautiful.  Meanwhile she would roll back, she'd roll forward, the snake trainer would come and move the snake from one body part to another, I would catch pictures from his legs flying out of the frame, with he being in the frame, the snake was going up, it was really... sort of fashion hell". Richard Avedon about the  Nastassja Kinski photo shoot.