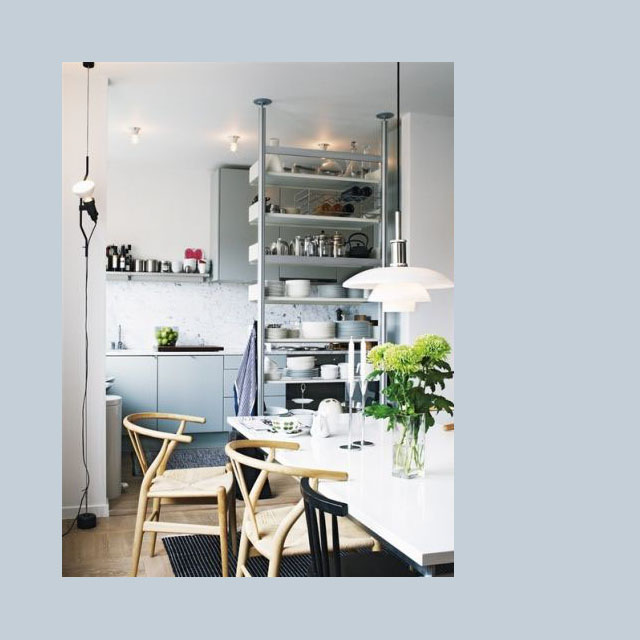 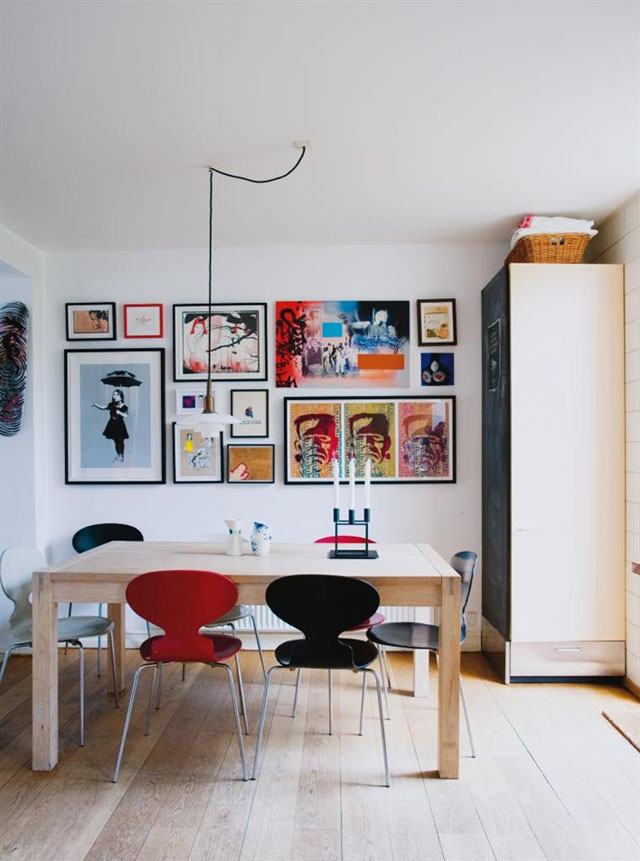 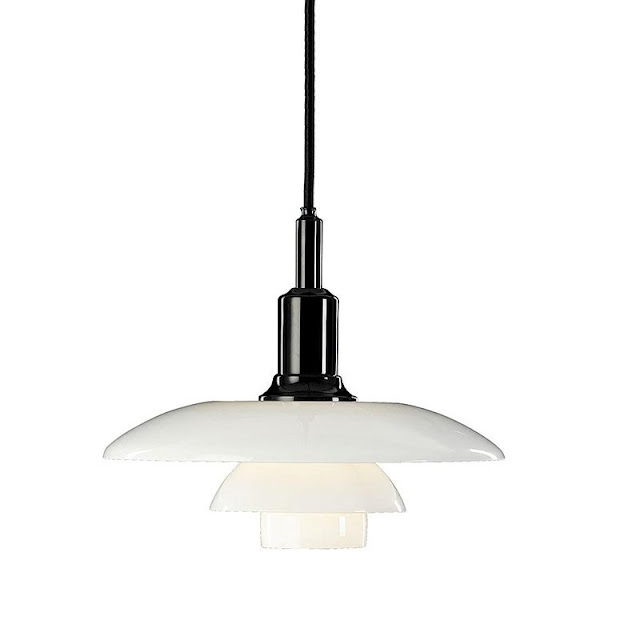 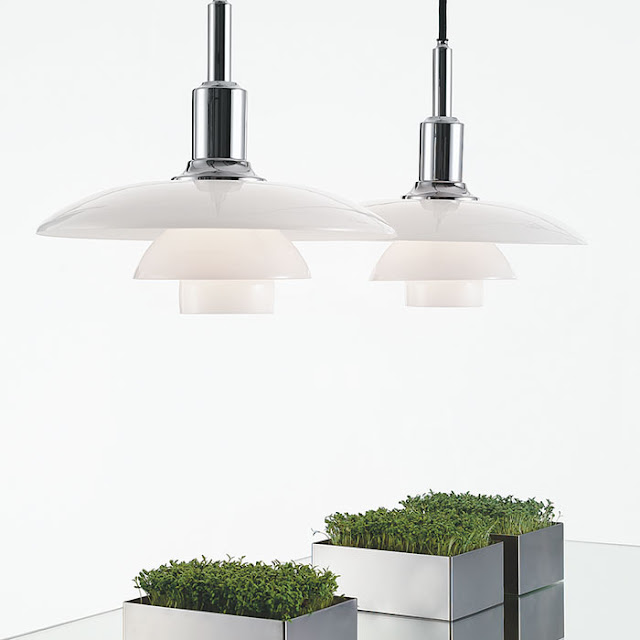 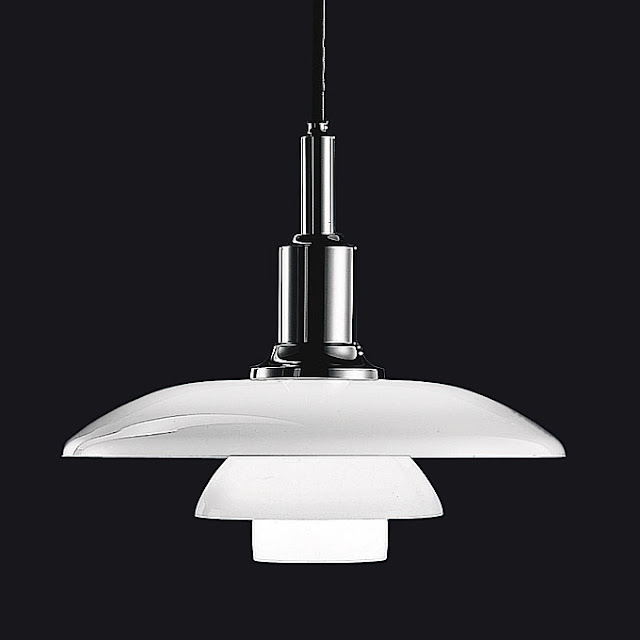 
Part of our Scandinavian modern design collection by Louis Poulsen; the PH 3 2 (AKA Poul Henningsen PH 3/2) is one of our favorite Danish modern light fixtures.  The name Poul Henningsen (1894–1967), or PH as he is perhaps better known, has become synonymous with modern Danish lighting design. A fine example is the Louis Poulsen PH 3/2 Pendant Lamp by Poul Henningsen. The gorgeous PH 3/2 pendant light fixture stands out because of its timeless design and high quality glass & chromed steel construction. The PH 3/2 glass pendant lamp was designed by Danish designer Poul Henningsen for Louis Poulsen in 1926. Having graced living rooms, universities, hotels, libraries, restaurants in Denmark for decades, the PH 3/2 Pendant Lamp remains one of Poul Henningsen's most recognizable lighting designs. PH 3/2 provides beautiful soft diffused illumination thanks to its ingenious diffuser design. PH 3/2 is based on the principle of a reflecting multi-shade system, creating a harmonious and glare free light. The glass shades are drawn over a logarithmic spiral, with the center of the light source placed in the spiral's focal point. The curvature and position of the three glass shades perfectly determine the distribution of light directing it down upon the table. At the same time the glass shades allowe the light to fill the room, avoiding a harsh contrast between the illumination of the table and the walls. Hang this beautiful glass pendant light fixture above your dining area where it is visible from the kitchen and living room, or suspend three of them above the kitchen counter for a refined look. To this day the PH lamp remains one of the finest attempts to design the perfect incandescent lamp fitting. What was perceived as a radical new way of thinking in terms of both technology and design, today still shows us what good lighting is — in a design that is still absolutely modern.The PH 3/2 pendant lamp will be the highlight of your interior and is sure to be enjoyed for many years to come. 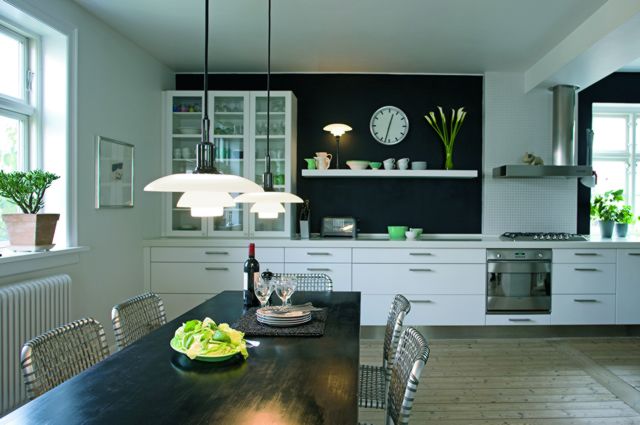 This lamp was designed by Danish designer Poul Henningsen. Poul Henningsen was born in Copenhagen to the famous Danish actress Agnes Henningsen. He never graduated as an architect, but studied at The Technical School at Frederiksberg, Denmark from 1911-14, and then at Technical College in Copenhagen from 1914-17. He started practicing traditional functionalistic architecture, but over the years his professional interests changed to focus mainly on lighting which is what he is most famous for. He also expanded his field of occupation into areas of writing, becoming a journalist and an author. For a short period at the beginning of WWII, he was the head architect of the Tivoli Gardens in Copenhagen. But like many other creative people, he was forced to flee Denmark during the German occupation but soon became a vital part of the Danish colony of artists living in Sweden. His lifelong collaboration with Louis Poulsen Lighting began in 1925 and lasted until his death. To this day, Louis Poulsen Lighting still benefits from his genius. Poul Henningsen was also the first editor of the company magazine “NYT”. The CEO of Louis Poulsen at the time, Sophus Kaastrup-Olsen, gave the magazine to PH as a gift because he had been terminated from the Danish newspaper he worked for (his opinions were too radical). Poul Henningsen's pioneering work concerning the relations between light structures, shadows, glare, and color reproduction—compared to man’s need for light remains the fondation of the lighting theories still practiced by Louis Poulsen Lighting.