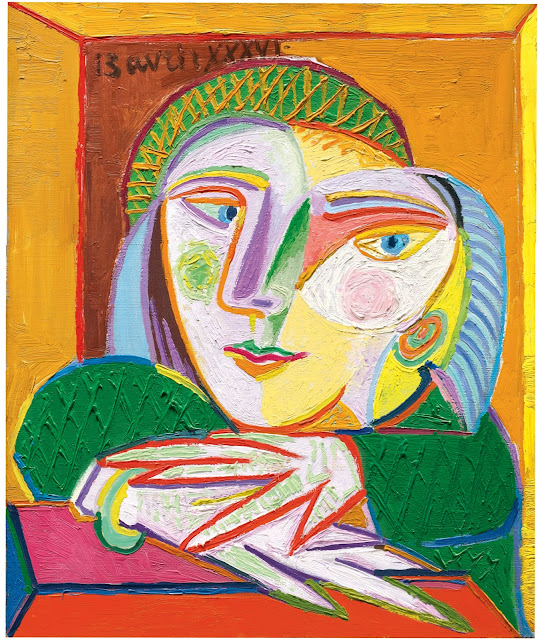 The color and the scale really envelop you.  Picasso’s paintings of his lover Marie-Thérèse Walter are among the greatest images of love, sex and desire in twentieth century art. Created amidst the spiralling emotional chaos of Picasso's own personal life in the 1930s, the 'Marie-Thérèse pictures' comprise what is largely considered to be the artist's creative peak and have come to epitomize Surrealist figurative painting at its most impassioned and dramatic. This richly-textured painting, with its thick cross-hatching, is believed to be one of the most color-saturated in Picasso’s oeuvre. It evidences one of the first creative bursts of energy following a near year-long hiatus from painting during his stressful separation from his wife Olga. It is also perhaps the most emotional portrayal of the woman who would go down in history as Picasso's personification of love. 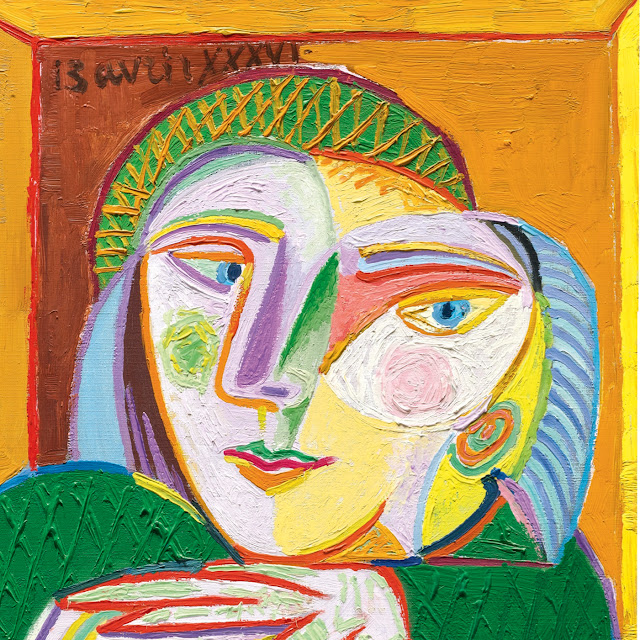 Picasso had met Marie-Thérèse in Paris in 1927 when she was only seventeen, and the wealth of images she inspired over the following decade has been acclaimed as one of the greatest achievements of the artist's career. Dating from 1936, this sumptuous and exuberantly colorful portrait of the young woman was painted in April following the birth to Picasso’s daughter Maya the previous fall, and her presentation here demonstrates the potency of her role in the artist’s life. His biographers and descendants have claimed that Picasso’s relationship with Marie-Thérèse was the most emotionally enriching of all his love affairs, despite the numerous infidelities and his eventual marriage to his second wife Jacqueline. Through it all, Marie-Thérèse remained the personification of sweetness and light, sustained by Picasso’s declarations of his enduring love for her. Just weeks after painting her striking likeness in Femme à la fenêtre, he described his feelings for her in no uncertain terms: “This 23rd day of May 1936, I love you still more than yesterday and less than tomorrow. I will always love you as they say, I love you, I love you, I love you, I love you, I love you….” (quoted in L’Amour fou, Picasso and Marie Thérèse, Gagosian Gallery, 2011, p. 40). 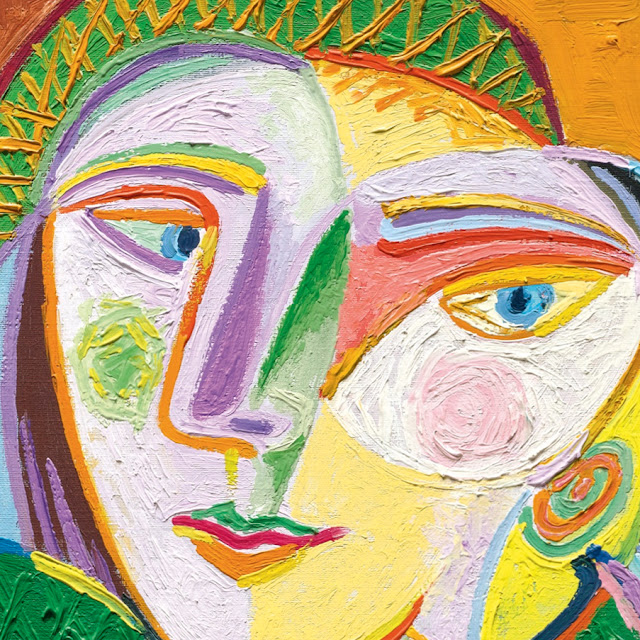 Femme à la fenêtre bears all the hallmarks of Picasso’s sumptuous depictions of the love of his life. Strength and vibrancy characterize the picture, with its sharp color palette, angularity and boldness of form. An athletic, statuesque blonde, Marie-Thérèse was the embodiment of sensuality, and her physical presence elicited some of Picasso’s most visually arresting images (fig. 2). His many inventive depictions of her asleep, reading or at play underscore how her every move fascinated him. In the present work, he pictures her seated at a window, similar to the pose of Leonardo's Mona Lisa smiling enigmatically from within the loggia. Now the mother of his child, Marie-Thérèse is cast in a new role, evocative of the courtly ladies of Renaissance portraiture and indicative of her more dignified status in the artist's life. 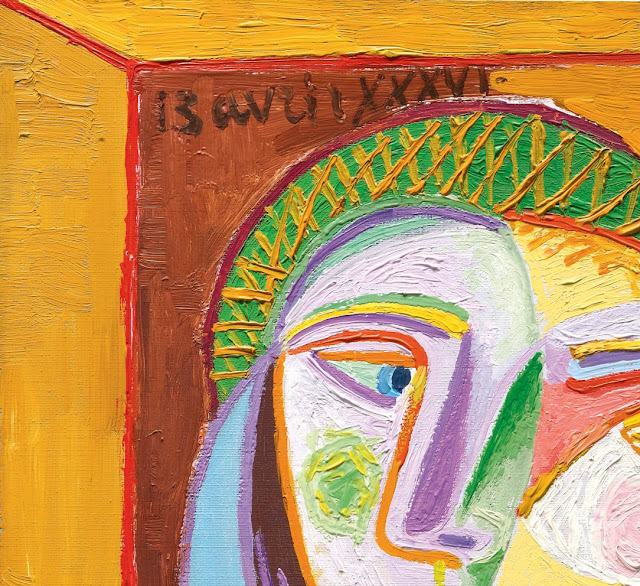 Picasso was not the only one who found Marie-Thérèse’s physical presence irresistible. “I found her fascinating to look at,” reported Françoise Gilot upon meeting her rival in 1949. “I could see that she was certainly the woman who had inspired Pablo plastically more than any other. She had a very arresting face with a Grecian profile. … She was very athletic; she had that high-color look of glowing good health one often sees in Swedish women. Her form was very sculptural, with a fullness of volume and a purity of line that gave her body and her face an extraordinary perfection” (quoted in L’Amour fou, Picasso and Marie Thérèse, pp. 71-72). 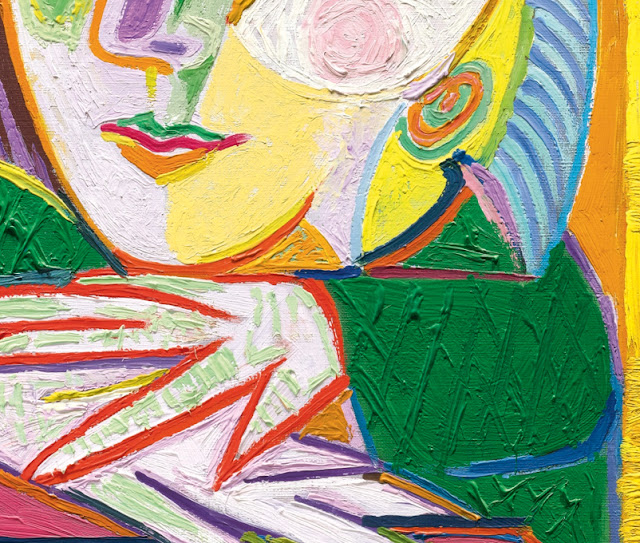 In contrast with his depictions of a more passive Marie-Thérèse, the present painting is one of his most animated, tactile and sculptural renderings of the young woman. Her figure is rendered with incisions into the thick paint, adding dimension to her features. Her alertness and sharpened sensibilities are not without merit, as the composition dates from a vulnerable period in her relationship with the artist. Picasso painted this canvas at a villa in Juan-les-Pins, where he had taken Marie-Thérèse and their infant daughter Maya during the spring of 1936 (fig. 1). He had neglected her for months following the birth of their daughter in order to deal with his separation from his estranged wife Olga. But another distraction had entered Picasso’s life during these months, and her influence on Picasso was becoming increasingly apparent in his art. Dora Maar, the young Surrealist photographer whom Picasso met through Paul Eluard while Marie-Thérèse was pregnant, had already commenced her love-affair with the artist by late 1935. By the end of the decade Dora would eclipse Marie-Thérèse as Picasso’s primary muse, becoming the inspiration for his harrowing “weeping women” series of the war years. 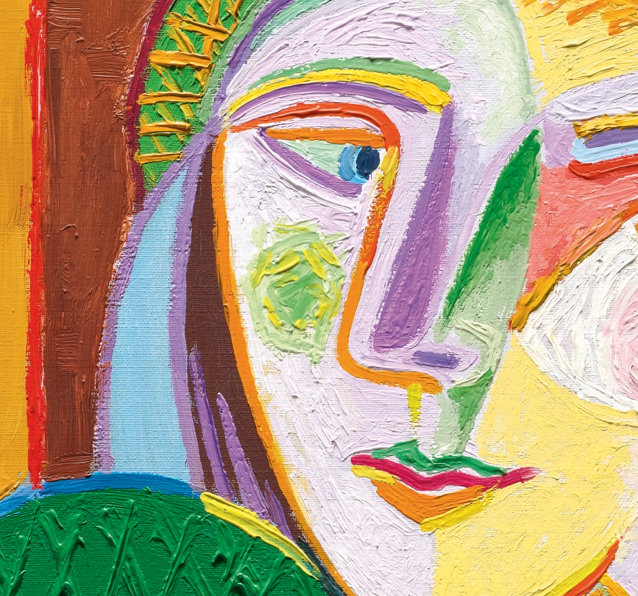 Picasso would interpret Dora’s strength of character and fiery personality in severely abstracted and sharply linear depictions reinforced with acidic colors. We can see iconographic traits manifesting in the present depiction of Marie-Thérèse, particularly in his rendering of her hands. While the distinctive arches of Marie-Thérèse’s hairline and smooth curves of her face are present, it is Dora’s famously manicured fingernails that we see here, which would become her identifying features in some of Picasso’s most ambitious portraits (fig. 3). Dora's presence also makes its way into this picture vis-a-vis the artist's focus on Marie-Thérèse's hat, which Maya Widmaier Picasso has identified as a beret that her mother purchased at Hèrmes. Picasso embellishes this accessory with textural cross-hatching, calling to mind the embossing of the golden halo on Duccio's twelfth century Madonna (fig. 5). While the luxe accessory may have been important to the sitter, its significance in this painting becomes clear in retrospect: for it was Dora who would be immortalized in Picasso's portraits as the wearer of stylish hats. What may have then been an important personal item for Marie-Thérèse becomes here a symbolic indicator of her status as the saintly new mother of Picasso's daughter and as the antithesis of her new rival. In fact, the picture can be read as an amalgam of both women, and evidences a Madonna/Magdalene dichotomy that manifested in Picasso's art while he was simultaneously involved with both women.  As is the case for many of the works now considered to be among Picasso’s greatest pictures, Femme à la fenêtre remained in the artist’s possession until his death in 1973. It was then inherited by his granddaughter Marina, whose father was the son that Picasso had with his wife Olga. Because Picasso was not able to divorce Olga due to the heavy financial penalties that would ensue, he was unable to marry Marie-Thérèse and kept their relationship a secret well into the 1930s. Marie-Thérèse, for her part, was mostly tolerant of the situation, with Picasso forever reassuring her that she was the primary object of his affection. Her permissive temperament, however, is alleged to have faltered upon meeting Dora only months after he finished the present canvas. As the story goes, Picasso was painting Guernica in his studio when Marie-Thérèse met Dora for the first time. “I kept on painting and they kept on arguing,” Picasso told Gilot in later years. “Finally Marie-Thérèse turned to me and said, ‘Make up your mind. Which one of us goes?’ … I was satisfied with things as they were. I told them they’d have to fight it out for themselves. So they began to wrestle. It’s one of my choicest memories” (quoted in ibid., 49-50). It is Marie-Thérèse’s uncharacteristic fierceness that is perhaps alluded to in this most fascinating and provocative picture.
art by pablo picasso modern art modern art for sale pablo picasso the art curator