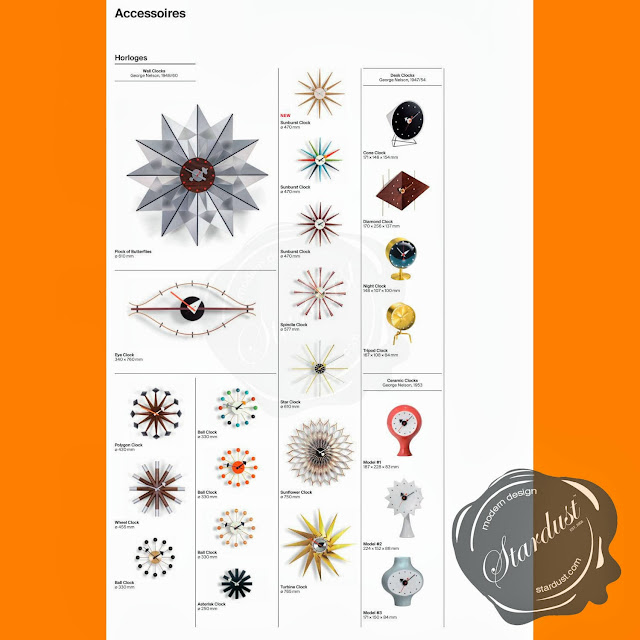 Stardust® Modern George Nelson Clocks - Nelson Clock - Vitra Clocks - Wall Clocks.  The complete collection of George Nelson Clocks made by Vitra and available from Stardust with Free Shipping.  the george nelson clock collection is made by vitra in europe. vitra is a manufacturer of contemporary furnishings for the home and the office. the vitra collection includes some of the most beautiful icons of modern design in all categories including chairs, stools, storage, rugs, lighting, clocks, dining accessories, sofas, tables. vitra also produces the vitra miniatures collection which are scale models of modern chairs. the vitra collection is produced in europe.  belief in progress and growing economic prosperity were central aspects of the american way of life around 1950. everything seemed possible, and people strove to be 'modern'. with the aim of bringing modern design into american homes, george nelson conceived a wide array of everyday objects: lamps, clocks and other domestic accessories. up until the 1970s, the nelson office created many different items for the home, including the 'bubble lamps' and the 'ball clock', which became icons of mid-century modern design.  george nelson, born 1908 in hartford, connecticut, studied architecture at yale university. a fellowship enabled him to study at the american academy in rome from 1932-34. in europe he became acquainted with the protagonists and major architectural works of modernism.

he joined the editorial staff of architectural forum in 1935, where he was employed until 1944. a programmatic article on residential building and furniture design, published in architectural forum by nelson in 1944, attracted the attention of d.j. depree, head of the furniture company herman miller.

shortly after this, george nelson assumed the position of design director at herman miller. remaining there until 1972, he became a key figure of american design, also convincing the likes of charles and ray eames, isamu noguchi and alexander girard to work for herman miller.

his collaboration with vitra began in 1957. from 1946 onwards nelson also ran his own design office, creating numerous products that are now regarded as icons of mid-century modernism.

the wall clocks are available in a diverse range of forms and materials. equipped with high-quality quartz movements, they offer a refreshing alternative to conventional clocks. the perfect model can be found for every occasion among the wide selection of different designs.shop stardust for the vitra george nelson clocks by vitra designl and the best in modern design and wall clocks, plus 110% price match guarantee & free shipping at Stardust.com