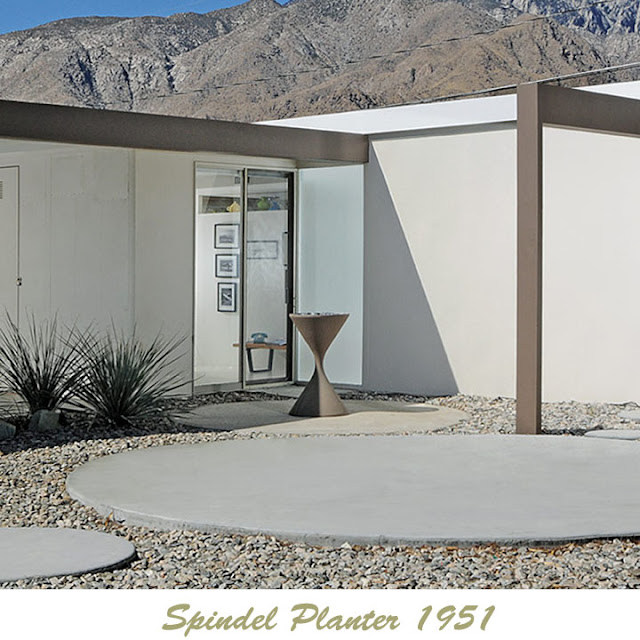 LARGE MODERN CONCRETE OUTDOOR DESIGN GARDEN PLANTER POT - The classic mid-century modern outdoor planter pot with its sleek sculptural shape and attractive concrete finish is pictured at this steel house in Palm Springs.  Photographed by Brian McGuire's, the midcentury modern prefabricated steel house in Palm Springs, California, designed in 1961 by architects Donald Wexler and Ric Harrison.  Pictured in front is the mid century modern Spindel Planter designed by Anton Bee and Willy Guhl for Eternit in Switzerland. Considered one of the most iconic modern design planters, the “Large Spindel Planter” is chief among Guhl’s many contributions to the Modernist design scape. Additionally, this planter helped to fortify the reputation of Eternit, a type of fiber cement introduced in the mid-century. The present lot comes in a classic grey fiber cement, a standard colorway for this design. Willy Guhl (Swiss, 1915-2004) was considered one of Switzerland’s foremost industrial designers. Prizing economy of form as well as streamlined, functional design, Guhl’s works have been applauded for their elegant rendering. Popular during the leisure culture of the Post War era, Guhl sought considerable acclaim for his inexpensive, weather resistant furnishings, which were in higher demand among the public. He was part of the Suisse neo-functional design scene, acting as one of the main advocates for flat-packed furniture, as he believed that more customers would be able to afford good design if furniture were assembled at home. He taught for years at the Technical School in Zurich.