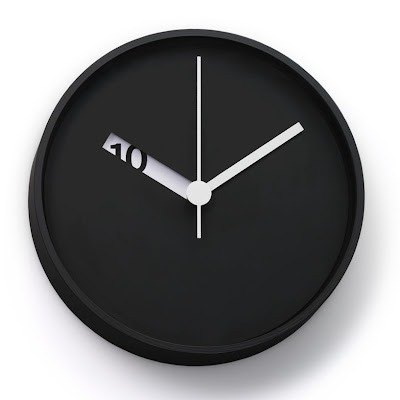 Ross McBride was born in the Northeastern United States in 1962. He earned his bachelor's degree in graphic design from the California Institute of the Arts, and upon graduation in 1985, moved promptly to Tokyo where he has lived ever since. Ross McBride Ross has exhibited at 100% Design London, Salone Satellite in Milan, ICFF New York, and Tokyo Designers Block, where he won the TDB Award 2003 for best installation design. He has worked on projects for Duende, E&Y, Max Ray, Starbucks Japan, Water Studio, Sharp, and Sony.

Specifications: Mineral glass, aluminum case, white dial. The Max Bill clock with lines is easy to attach to a wall and works with a single AA battery. Powered by one AA battery, included. Also includes clip stand for use on a shelf or tabletop.