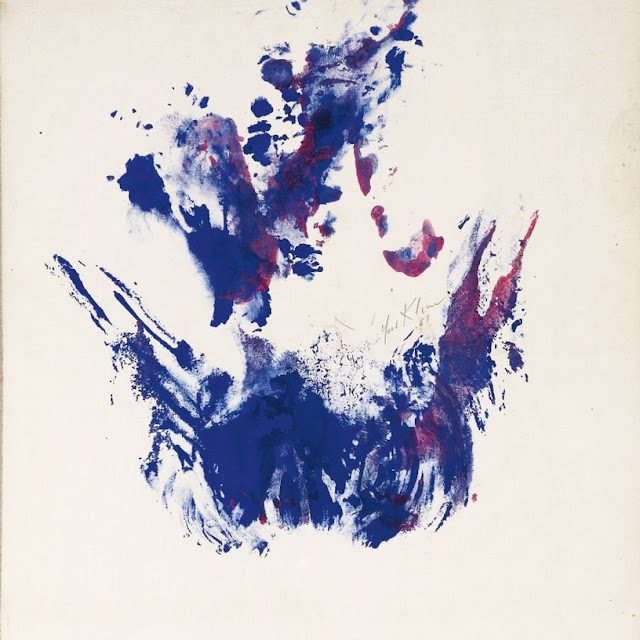 Yves Klein’s life and career witnessed the ultimate confluence of spectacular innovation and tragic brevity. Few others in recent cultural history have ignited such a dramatic artistic revolution within such a short space of time. During the half-century since his shocking early death at just thirty-four years of age, Klein’s legacy has been a benchmark against which major advancements in abstract, conceptual and performance art have been measured. More than this, beyond mere labels and categories, Klein’s aspiration to the purest form of creativity has been an inspiration for generations. His life was devoted to innovation and his art remains unlike anything else: it is, quite simply, unique. Despite an impressive output for such a transient existence, extant examples of his work are relatively rare. Long resident in the collection of Robert and Andrea Bollt, Ant Su 27 has been hidden away from public view for decades and emerges today as an extraordinarily vibrant vestige of his sensational, provocative and sublime art.


The ethereal composition of the female form disseminates down this vertical composition in a sumptuous crescendo of pure International Klein Blue and brilliant pink pigments. The double-colored impression of the body becomes an interiorized corporeal schema that acts as if a residual impression of the soul; caught between the pink and blue of a burning flame. The gorgeously seductive forms simultaneously epitomize themes of presence and absence; of the concrete and the immaterial; the momentary permanently captured as “the trace of the immediate”; and Zen and Rosicrusian ideologies embodied in judo katas and Klein’s meditative “Leap into the Void”.

Executed in 1961, Ant Su 27 is a perfectly classic example of the legendary works in which Klein choreographed paint-smeared models to leave positive imprints, significantly here on fine-weave linen rather than the more commonplace paper of other Anthropométries. Holding forever on its serene expanse the traces of Klein’s precisely executed performance, the positive imprints lock an unrepeatable shadow into the linen. Even though Klein directed the position and, to some extent, even the contact areas of each model’s body, the morphology of the imagery ultimately depended on the chance moment of when and where the body’s anatomical poise touched the paper. Such subtle fluctuation invests this work with dynamism and vitality: in effect, a life of its own.

The Anthropométries series – a term coined by Klein's friend the critic Pierre Restany – came in the wake of the fabled event Anthropométries de l'Epoque bleu. Staged on March 9th 1960 at the Galerie d'Art Contemporain in the Rue Saint-Honoré in Paris, Yves Klein presided over an action-spectacle in which the artist breathed new life into the avant-garde and introduced an entirely new art form. In front of a select crowd of critics and gallery patrons, the artist - immaculately dressed in a tuxedo and adorned with the Maltese Cross of his Saint Sebastian brotherhood - orchestrated his pigment-smeared models to create static imprints and dynamic movement paintings against a paper-lined environment.

The “undefined shape of pure being” extant in the best Anthropométries is precisely the immaterial sensibility captured in Ant Su 27. The work also harbors a stillness of body outline that acts like an echo to the departure of life, just as inverted shadows of bodies were left fixed on impermeable surfaces at the cities of Hiroshima and Nagasaki after the annihilating atomic flashes of 1945. By 1961, not even critics who accused Klein of a return to conventional figurative art could remain entirely immune to the force of imagery made with his “living brush.” Fellow artist Jesús Rafael Soto put it in no uncertain terms: “no other artist has succeeded in presenting such a powerful figuration.” (Hannah Weitemeier, Yves Klein, Cologne, 2001, p. 56)

Klein’s art can also be viewed through an analytic prism of Rosicrusianist writings, whereby the artist believed that to draw the trace of the immediate was to express the sensibility of space and to become one with space. The conception of levitation is further intensified by the artist’s continuous practice of Japanese Zen philosophy and practice of judo, both of which are pertinent to Ant Su 27. Following his intense Judo training in Japan from 1952-1954 Klein declared, “Judo is, in fact, the discovery of the human body in a spiritual space.” (Yves Klein, ‘On Judo,’ in Overcoming the Problematics of Art: The Writings of Yves Klein, 2007, p. 2) Ant Su 27 crystallizes this conception precisely, and becomes the perfect fulfillment of Klein’s unprecedented ambition to unite a transcendent space with the ethereal immateriality of the IKB and pink traces of existence.