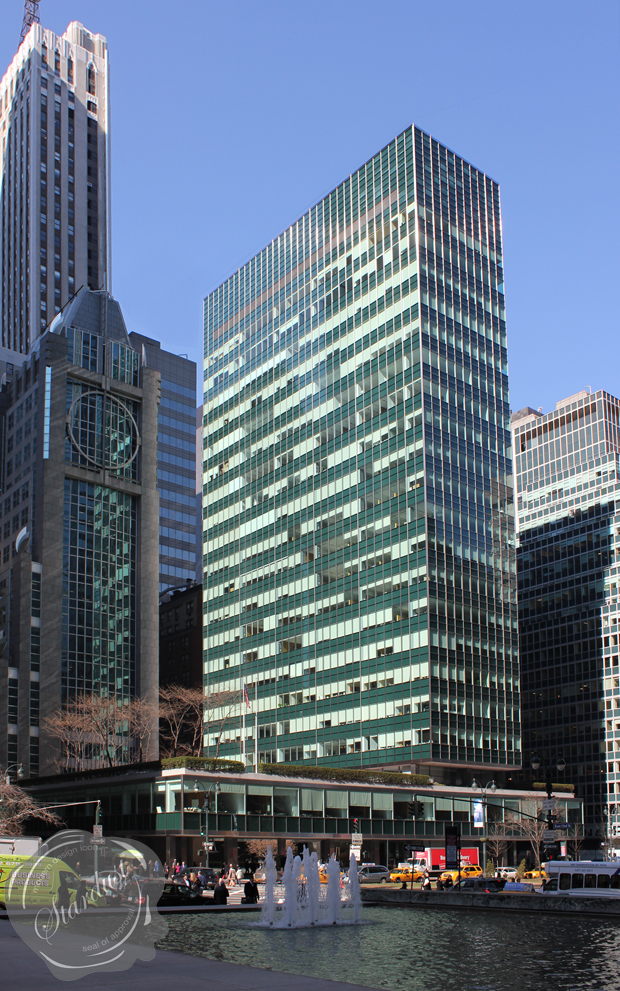 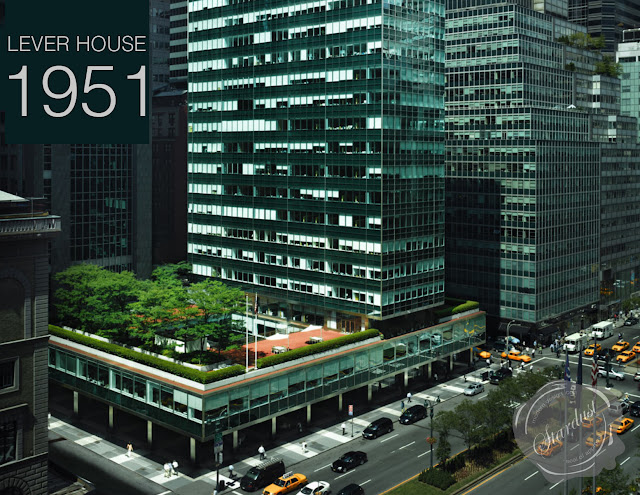 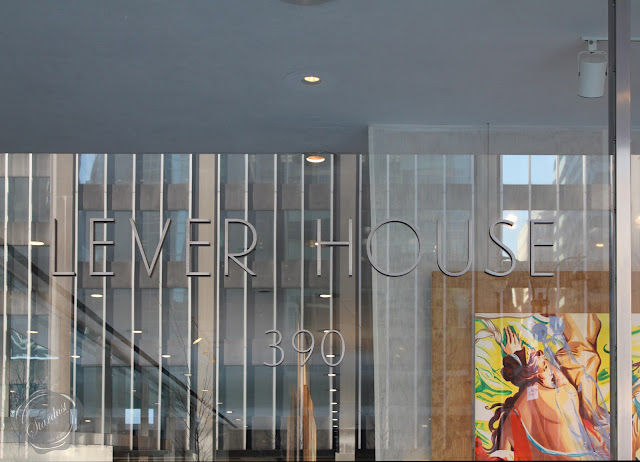 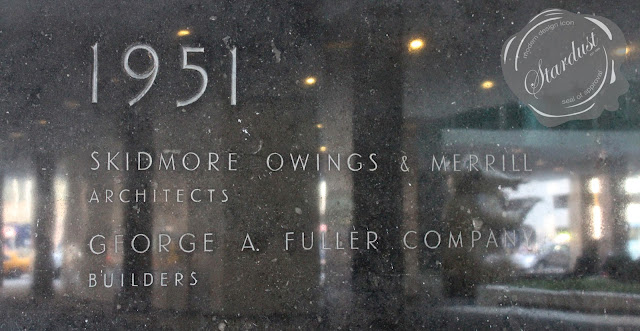 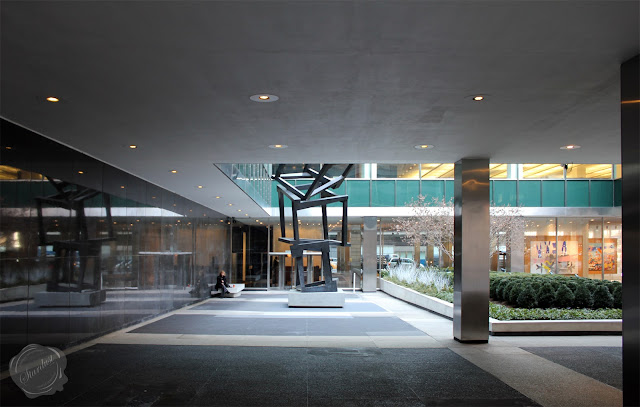 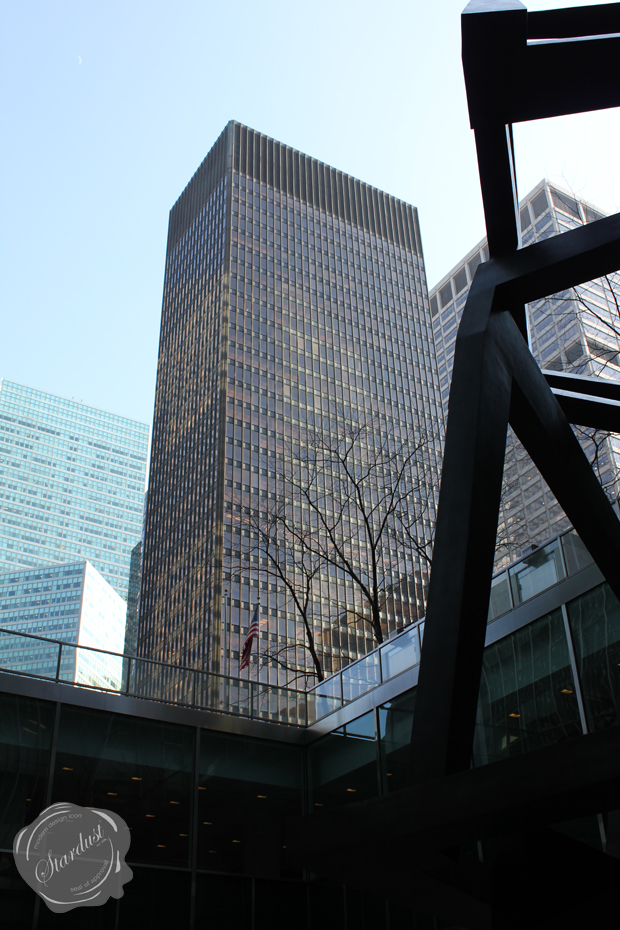 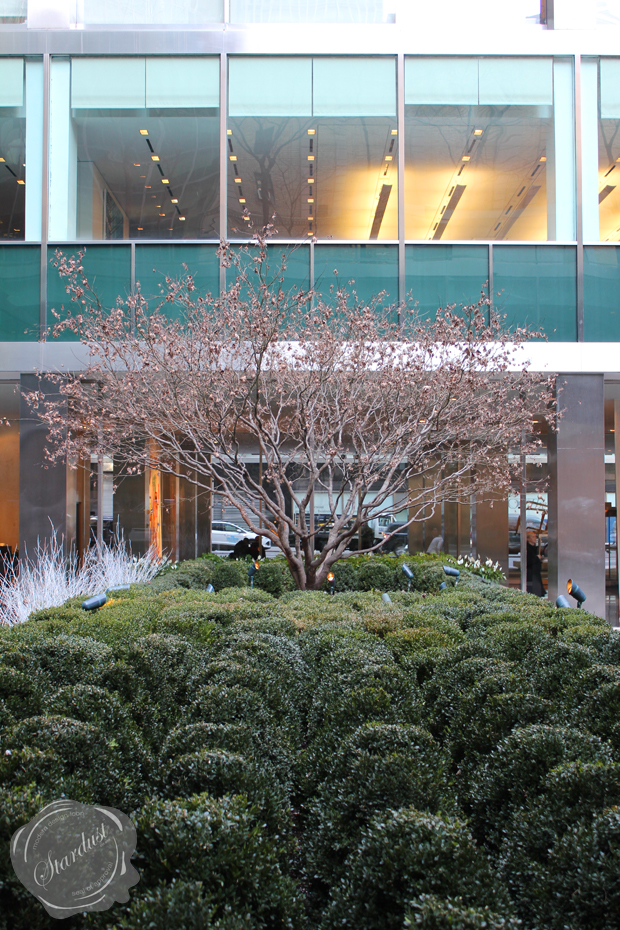 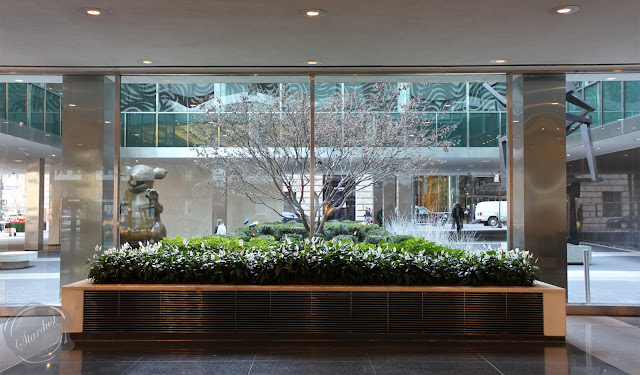 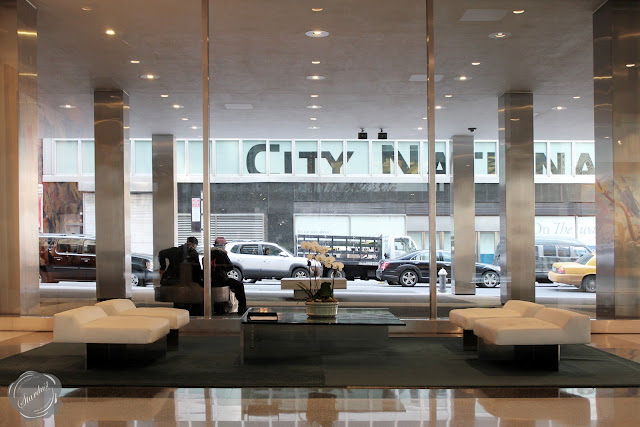 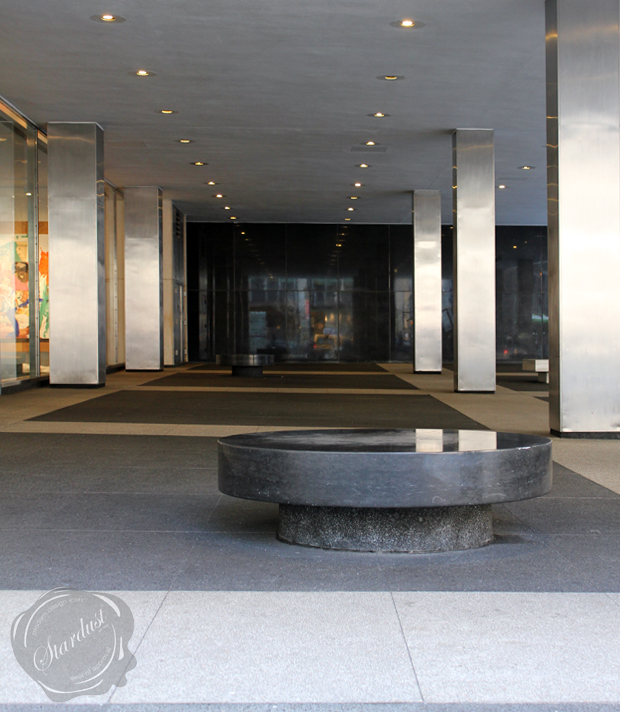 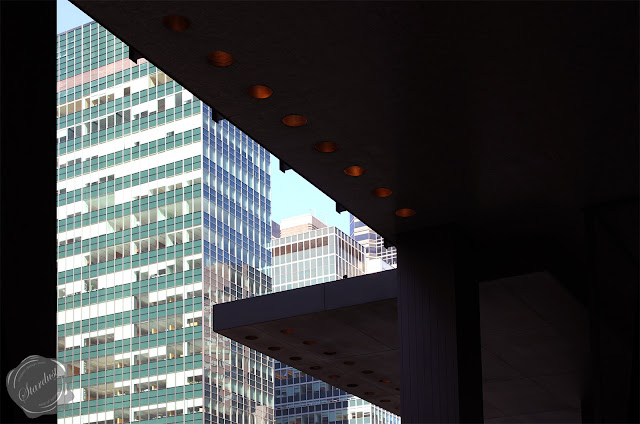 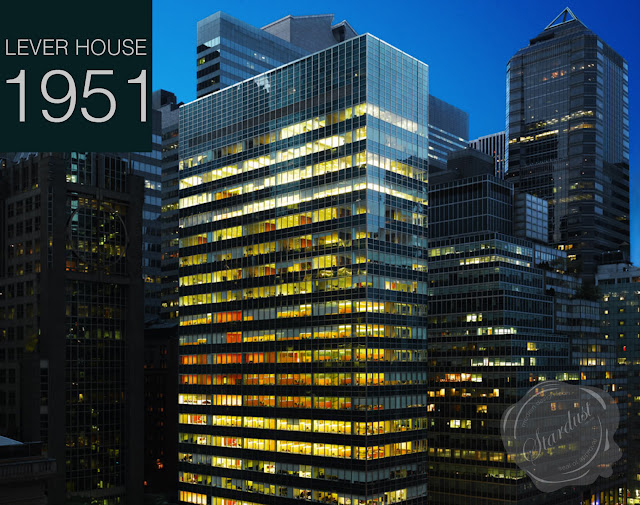 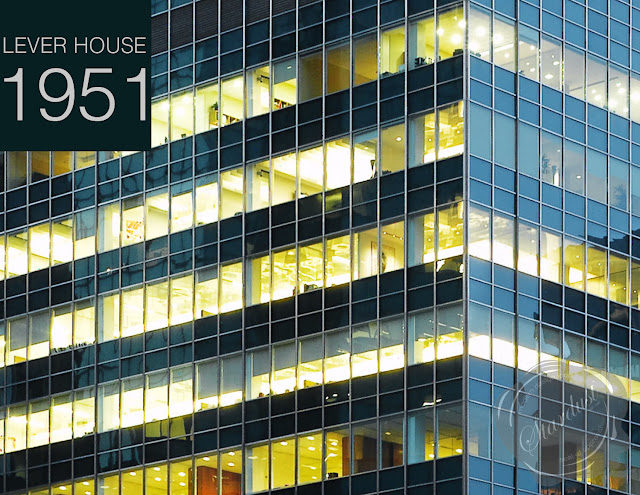 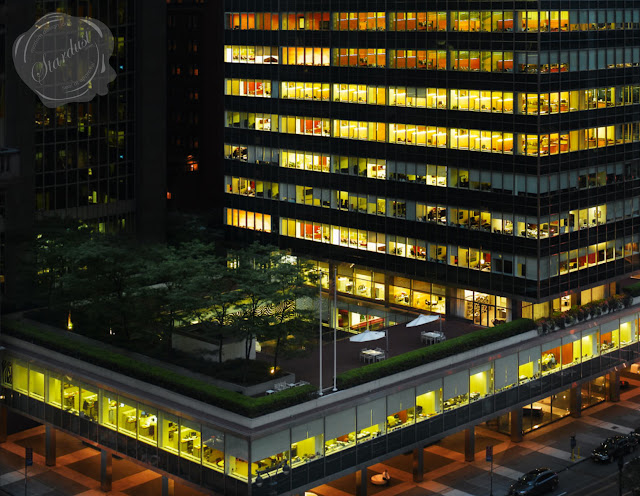 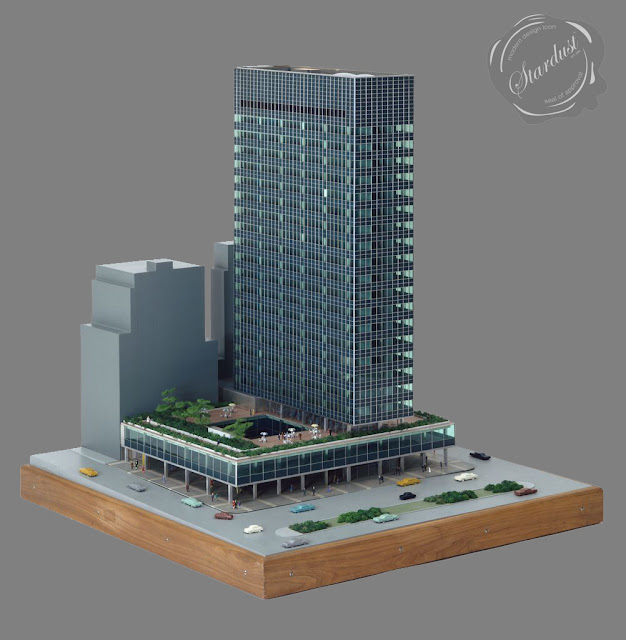 We at Stardust Modern Design have a profound love for mid-century modern architecture and everything related to modernism.  So we lucked out when we had a chance to photograph the wonderful Lever House on a resent visit to New York.  If you love modernist architecture; make sure to visit our modern design store.

The Lever House was designed by Gordon Bunshaft for the architectural firm of Skidmore, Owings and Merrill in 1951.  It is considered by many to be one of the finest modernist buildings in the US.  The Lever House is located at 390 Park Avenue in New York City right across another landmark; Mies van der Rohe's Seagram Building. Mies often said that the Lever House was one of his favorite buildings (although he was not the architect).  The Lever House was one of the earliest examples of the new modernist style in Manhattan.  Gordon Bunshaft's iconic Lever House, the modernist Park Avenue masterpiece built in 1951, is today known as the quintessential glass box skyscraper with its spectacular reflective green-glass properties. The construction of the Lever House marked a transition point for Park Avenue in Midtown Manhattan, changing from a boulevard of masonry apartment buildings to one of glass towers as other corporations adopted the International Style for new headquarters. The building was designated a New York City landmark in 1982 and was added to the National Register of Historic Places in 1983.

The Lever House was built in 1951-1952 to be the American headquarters of the British soap company Lever Brothers. It was the pet project of Lever Brothers president Charles Luckman, who had been identified on the cover of Time Magazine as a "Boy Wonder". Luckman would leave the company before the building's completion to achieve a notable architecture career on his own, including the design of Madison Square Garden, the Theme Building and master plan for Los Angeles International Airport, Aon Centre and initial buildings of the Kennedy Space Center and Johnson Space Center. In 1916, New York City had passed zoning laws designed to prevent new skyscrapers from overwhelming the streets with their sheer bulk. It required buildings to have setbacks as they rose, creating a sense of space and allowing sunlight to reach the street level. However, these setbacks were not required if the building occupied 25% or less of its lot, and it was this provision which allowed Lever House, and the other glass boxes which followed it, to be built in the form of a vertical slab. The building featured a glimmering 24-story blue-green heat-resistant glass and stainless steel curtain-wall. The curtain-wall was designed to reduce the cost of operating and maintaining the property. Its curtain-wall is completely sealed with no operating windows. This meant that much less dirt from the city would get into the building. The heat resistant nature of the glass also helped to keep air conditioning costs down. Additionally, the property featured a roof-top window-washing gondola that moved about the parapet wall on tracks. The curtain wall was fabricated and installed by General Bronze Corp, the same facade contractor that had recently finished the Secretariat Building curtain wall at the UN Headquarters. The ground floor contained no tenants. Instead, it featured an open plaza with garden and pedestrian walkways. Only a small portion of the ground floor was enclosed in glass and marble. The ground floor featured space for displays and waiting visitors, a demonstration kitchen and an auditorium. The second and largest floor contained the employees' lounge, medical suite, and general office facilities. On the third floor was the employees' cafeteria and terrace. The offices of Lever Brothers and its subsidiaries occupied the remaining floors with the executive penthouse on the 21st floor. The top three stories contained most of the property's mechanical space.

In 1982, the New York City Landmarks Preservation Commission designated Lever House as an official landmark. By that time, however, much of Lever House's original brilliance had been dimmed by time. The building's blue-green glass facade deteriorated due to harsh weather conditions and the limitations of the original fabrication and materials. Water seeped behind the stainless steel mullions causing the carbon steel within (and around) the glazing pockets to rust and expand. This corrosion bowed the horizontal mullions and broke most of the spandrel glass panels. By the mid-1990s, only one percent of the original glass remained leaving the once glimmering curtain wall a patchwork of mismatched greenish glass. In 1985, the land under the Lever House (fee position) was acquired by Sarah Korein from the Goelet estate. Unilever, the parent company of Lever Brothers, continued to lease the building. In September 1997, Unilever announced it was moving its Lever Brothers division to Greenwich, Connecticut. Following the announcement, Lever Brothers slowly began vacating the building, eventually leaving Unilever on only the top four floors.

In 1998 the leasehold position was acquired from Unilever by German-American real estate magnates Aby Rosen and Michael Fuchs. The Korein/Kleinhans family retained the fee position, and signed a new lease with Rosen's firm, RFR Holding LLC, requiring RFR to perform a comprehensive restoration of the building's facade (curtain wall). RFR negotiated a lease-back deal allowing Unilever to remain on the top four floors. Immediately following the acquisition, RFR Holding announced a $25 million capital improvement program including a restoration of the building's curtain wall and public spaces as well as repositioning it as a multi-tenant property. The deteriorated steel subframe was replaced with concealed aluminum glazing channels, a state-of-the-art solution in modern curtain wall technology, which is identical to the original in appearance. All rusted mullions and caps were replaced with new and identical stainless steel mullions and caps. All glass was removed for new panes that are nearly identical to the original, yet meet today's energy codes. Skidmore, Owings and Merrill, the building's architect, also performed the curtain wall replacement. The renovation project included the addition of marble benches and an Isamu Noguchi sculpture garden to the building's plaza – elements in the original plans for the building which were never realized.