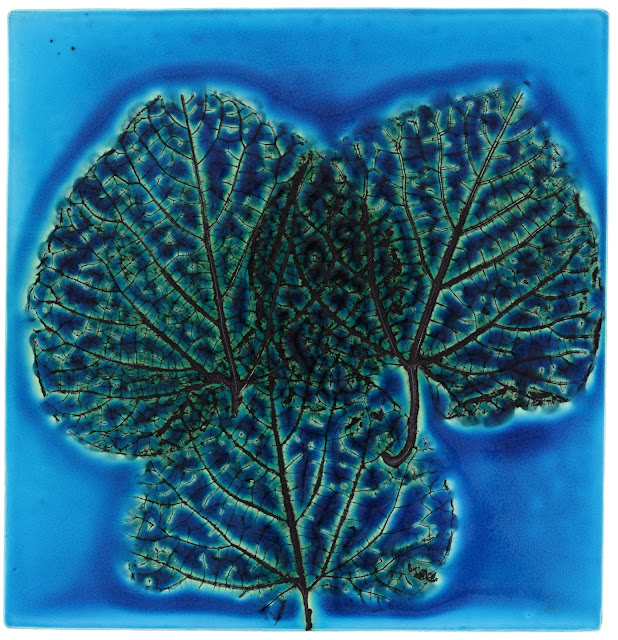 
These beautifully glazed ceramic tiles with leaf motives were designed by the late Finnish designer Toini Muona for Arabia in Finland.  Each is beautifully glazed in turquoise.  These Finnish design icons have become highly collectible; each tile is now valued around 750 Euro ($1,000).  Toini Muona studied at the Central School of Arts and Crafts, graduating from its so-called model design department in 1927. This department provided a kind of overall training in design, but Muona was interested in both sculpture and ceramics. She continued her studies at the school’s department of ceramics under Alfred William Finch and Elsa Elenius and worked at the ceramic studio at the Ateneum in Helsinki until 1932. In 1931, she was employed by the Arabia factory and in 1933, she became one of the artists and designers of the factory’s recently established art department. Her career with Arabia continued until her retirement in 1970. 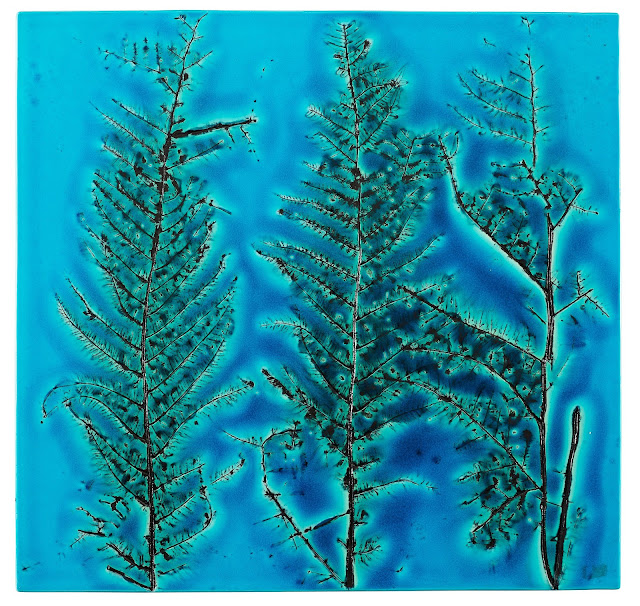 In 1932, while still a young ceramist, Muona already held her first solo exhibition, at the Museum of Applied Arts in Helsinki. The showing was received with encouraging reviews and Toini Muona was awarded a grant from the Alfred Kordelin Fund with which she was able to go on a study trip to France and Italy. In 1929 she began to participate in the annual exhibitions of applied art jointly staged by the Finnish Society of Crafts and Design and the Ornamo association. Her ceramic works were recognized and awarded prizes in international exhibitions of the 1930s: the Barcelona World’s Fair of 1929, in 1930 in Antwerp, the Milan Triennial of 1933, the Brussels World Fair of 1935 and the Paris World’s Fair of 1937. 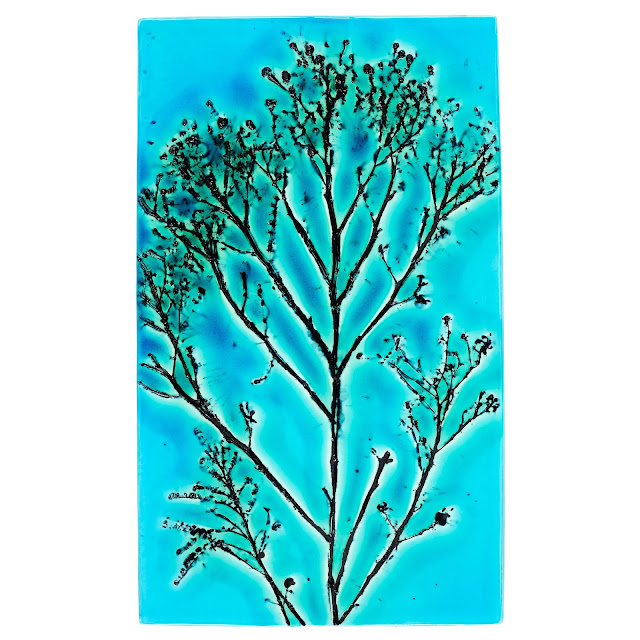 By the 1940s, Muona was a recognized and noted ceramist and a guiding figure in Finnish ceramic art, whose works were featured in the showings of the artists and designers of the Arabia art department in the Nordic countries. She held a joint exhibition with Birger Kaipiainen at Galerie Hörhammer in Helsinki in 1944. In the1950s, she was one of the Finnish designers to receive prizes at the Milan triennials. In 1951, she received the gold medal in Milan and in 1954 the Diplome d’honneur. In 1955, Muona was awarded the Pro Arte Utili medal for her ceramics at Faenza, and in 1957 she received the Pro Finlandia medal in Finland. 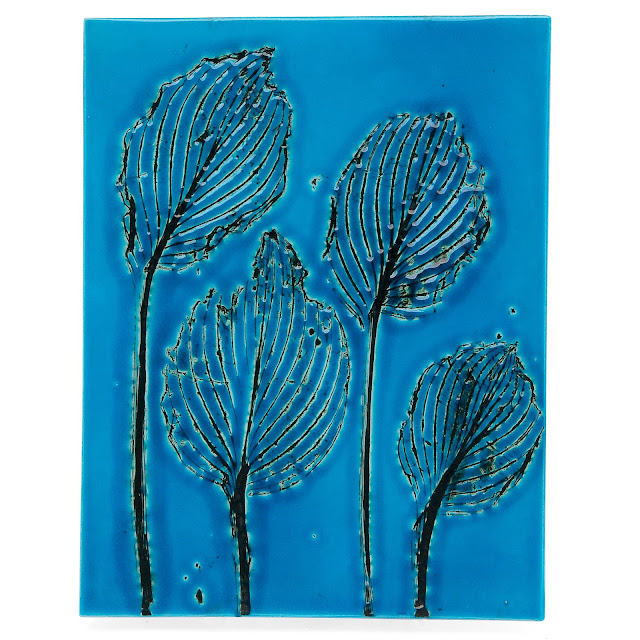 Toini Muona’s ceramic works of the 1930s generally followed a classicistic line, but less restricted and even more asymmetrical forms were beginning to appear. Muona was highly skilled with the potter’s wheel and she would add relief ornaments or impressed decorations to the surface of the piece. The glazes varied from light colours to red-green, being usually thick or crackled. In the 1940s, Muona began to make narrow, curving vases, which she called “hay pieces”. In many works, the shapes and colours of nature were Muona’s sources of inspiration. According to the art historian Harri Kalha, rising and upwardly directed shapes in Finnish ceramic and glass design in the 1940s also symbolized the faith of the Finns in the future and our joint contribution to the reconstruction of the nation. 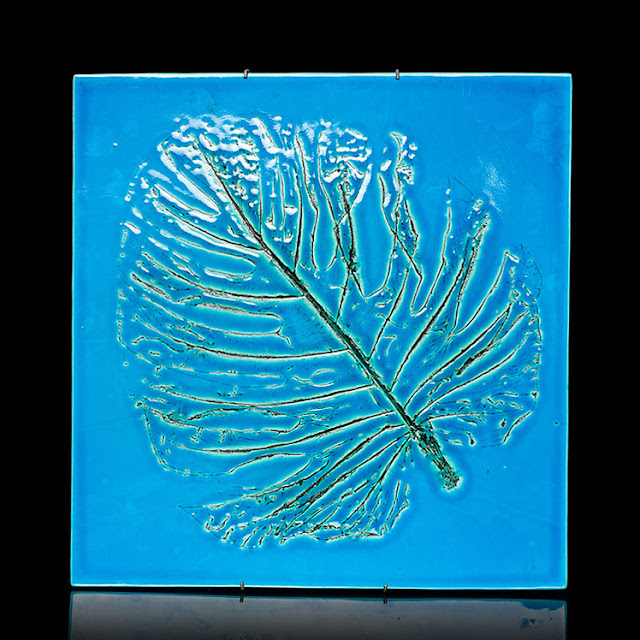 In 1948, Toini Muona developed a new method of decoration known as the leaf-impression technique, in which impressions were made with dried plants and accentuated with black frit. This technique was used for making large bowls and wall tiles of turquoise hues which were in great demand among buyers.  Toini Muona travelled abroad a great deal. Already in the 1930s, she had the opportunity to study French and Italian cultures, and in 1937 she studied for three months at a school of ceramics in Faenza. In the 1950s she travelled in the Nordic countries and Central Europe, and in the 1960s she visited Egypt, China, Thailand and the United States. The sights and impressions of these travels were also reflected at some level in her works. In the 1960s, Muona had a new and strong creative period as a result of which the forms of her works became increasingly reduced and simplified. Among other objects, she made large bowls with geometric designs in bright-coloured glazes. These works were clearly influenced by optic art. Toini Muona’s new works of the 1960s were on display in an exhibition held at the Wärtsilä-Arabia showrooms in Helsinki in 1970, and later at the Alvar Aalto Museum in Jyväskylä. Before working for the Arabia factory, Muona designed textiles for Atelier Vigil. Another separate course in her career was glass design, involving objects for the Riihimäki glassworks in 1937 and 1949 and the Nuutajärvi glassworks in the early 1960s.

There are many stories about Toini Muona’s artistic nature and professional methods. Writing in the Swedish newspaper Svenska Dagbladet in 1944, Margaretha Bjurström described Toini Muona’s work as followed: “Stepping into Toini Muona’s studio while she is working, one feels confronted with a wizard in a magic circle in contact with magical forces and beings.” Aino Kallinen, the editor of the Saviseppo ceramics magazine, wrote in 1948: “That girl entails temperament, humour and spice!... If we could speak of ‘divas’ in ceramics, our Moina would definitely be one, in view of her fervour when creating new things and her anger at herself when she looks at her earlier works that she may regard as outright inexcusable. A temperament like this is a blessing for an artist. It is the source of continuous development.”