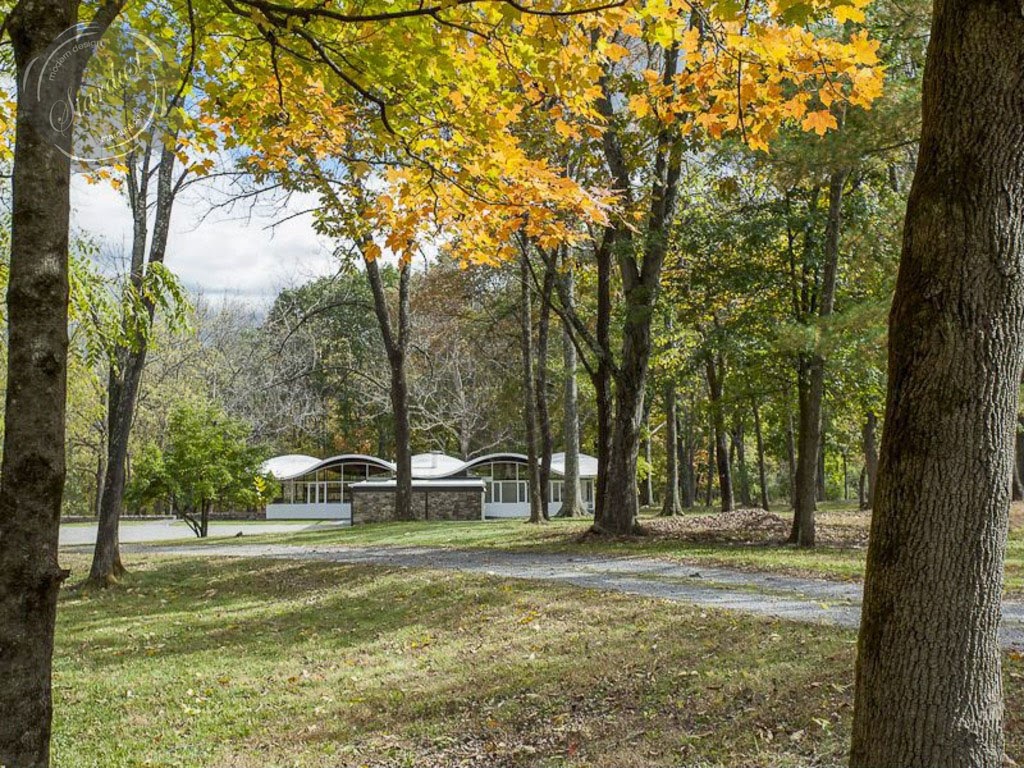 Fans of Mad Men Set Design and mid-century modern interiors, rejoice!  Voted one of the 10 Best Houses in America by Architectural Record. A sweeping roofline floats effortlessly amidst an open woodland landscape. Mid-Century Modern architect Jules Gregory's masterpiece allows the eye to enjoy a poem formed by architectural joinery in wood, glass, stone, and landscape. A footbridge over a seasonal stream leads to a guest quarters/ serene sanctuary that artfully counterbalances the main home s exotic curves. Privacy abounds on this 10-acre modern estate. Just beyond the riverside towns of Lambertville and New Hope, the property is minutes to Princeton with easy access to NY and Philadelphia. The cost of this house, excluding lot, landscaping and furnishings was about $30,000.00 in 1960. The home recently went on the market for close to $1 million. Designed by architect Jules Gregory and completed in 1960, this quirky midcentury-modern residence is characterized by a sculptural concrete roof and is set amid ten lush acres 65 miles south of New York City. Jules Gregory was a prominent mid-century modern architect, and like Frank Lloyd Wright, Louis Kahn, and George Nakashima, he had a significant legacy in the New York/NJ/Pennsylvania area.  We are passionate about all things modern: below are some of our favorite mid century modern design picks. 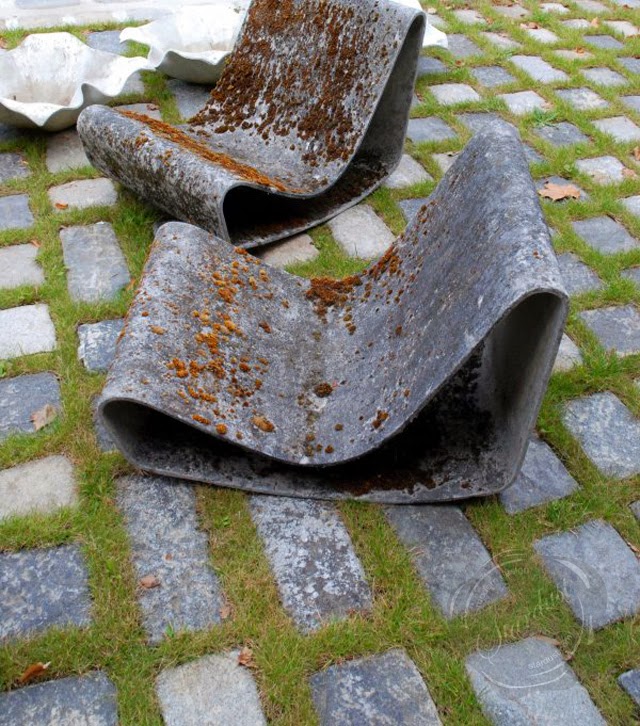 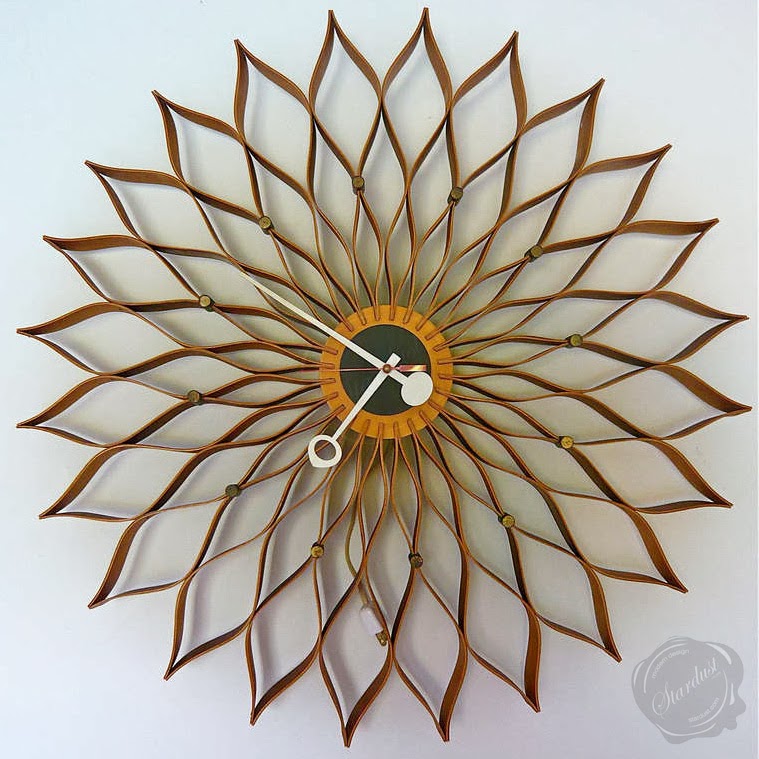 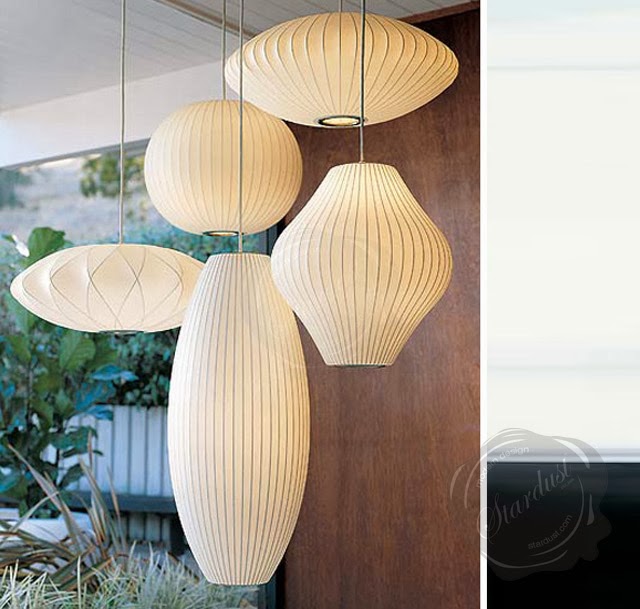 Stardust Modern Design loves modern architecture and this amazing mid-century-modern gem is one of our favorites! A great play of architecture and nature, how simple the vocabulary is an how elegant the result! Designed by Jules Gregory, this fanciful house achieves quite an air of distinction from it's eye catching double conoid roof. And the setting is quite appropriate to give such a scheme full play. The house is situated on a ten-acre site that has woods, fields and streams, and is far out in the country. the actual building site is set back about 800 feet from the road. The double conoid roof is formed by two identical laminated wood beams on either of the long walls of the building. One is used up-side-down in relation to the other. A peak on one side is a valley on the other. A straight laminated beam is at the center. The roof deck is made of white fir (2 by 3's) nailed to each other with 16d spikes 24-in. o.c. and to the beams with 20d spikes. The roof is freestanding, supported by wood posts. Full expression of the roof shape is emphasized by running all partitions only to a height of 7 feet, and keeping all of them non-bearing. Acoustic privacy is achieved by sheets of glass spanning from the partition tops to the roof decking. Stone walls give bracing and texture to the stucco and glass panels. The house’s distinctive curvacious roof cuts a striking figure among the bucolic landscape.

On to the images! 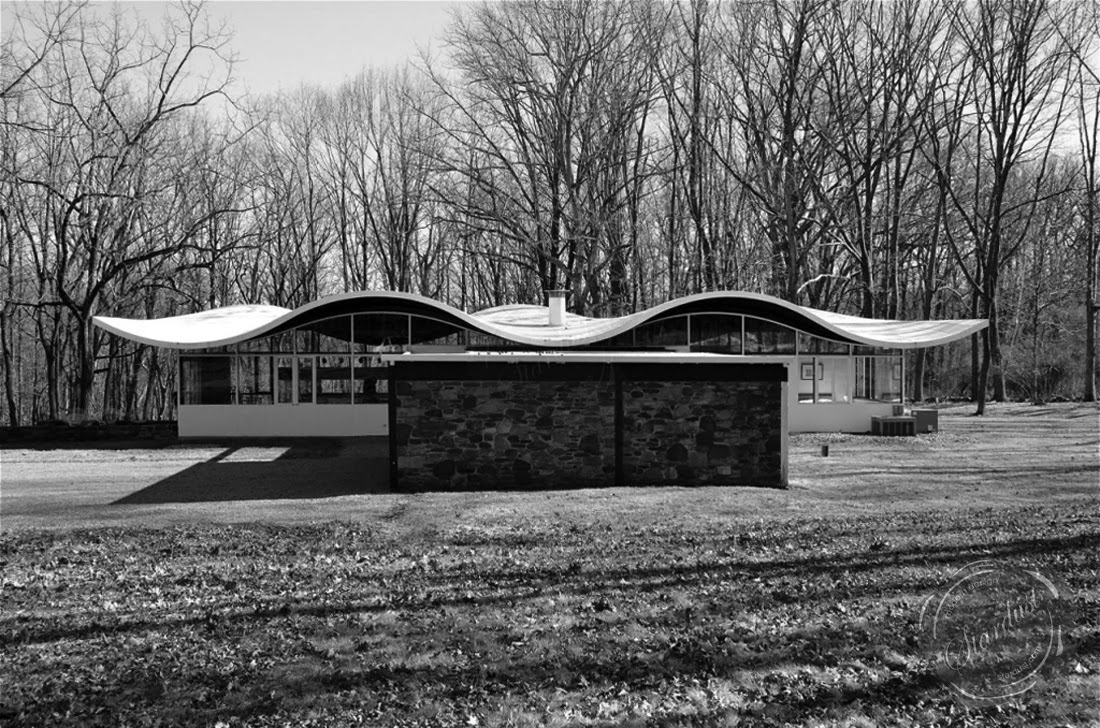 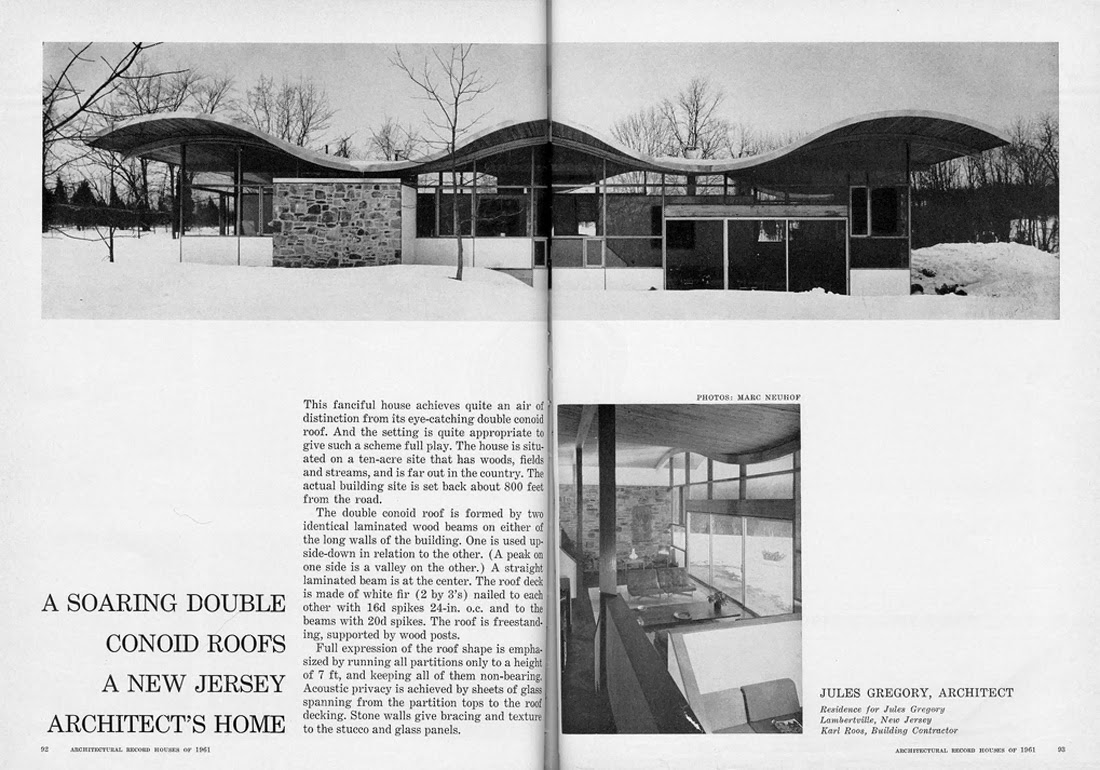 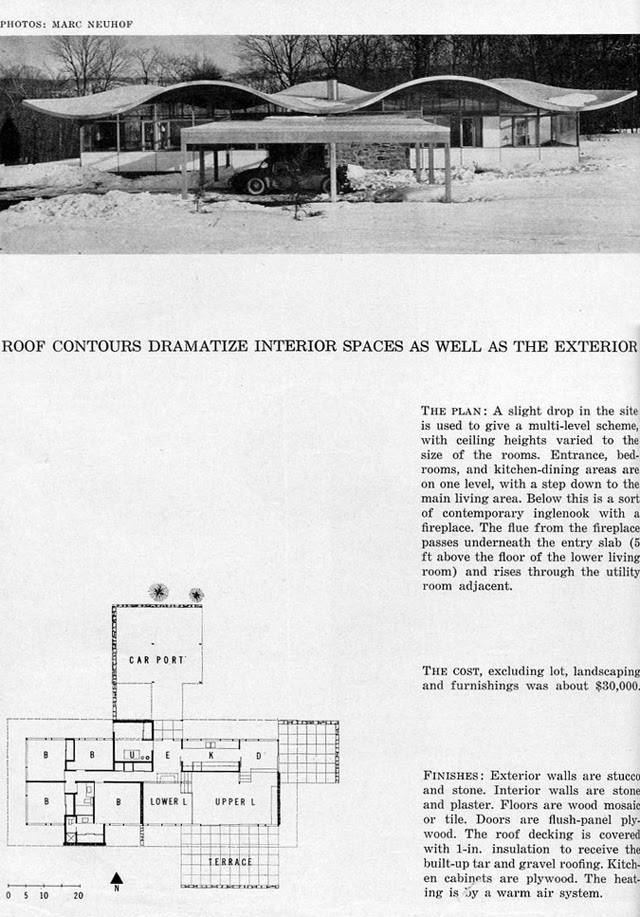 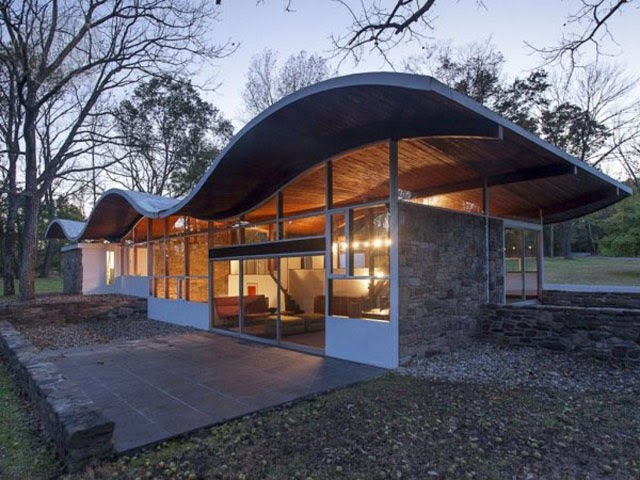 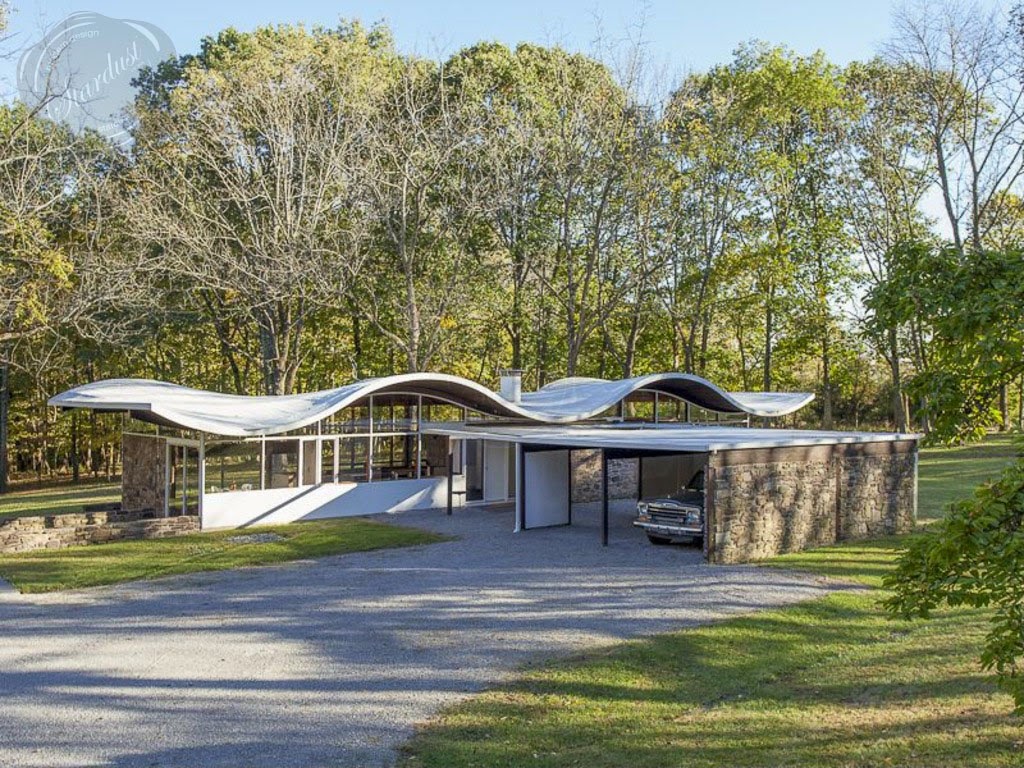 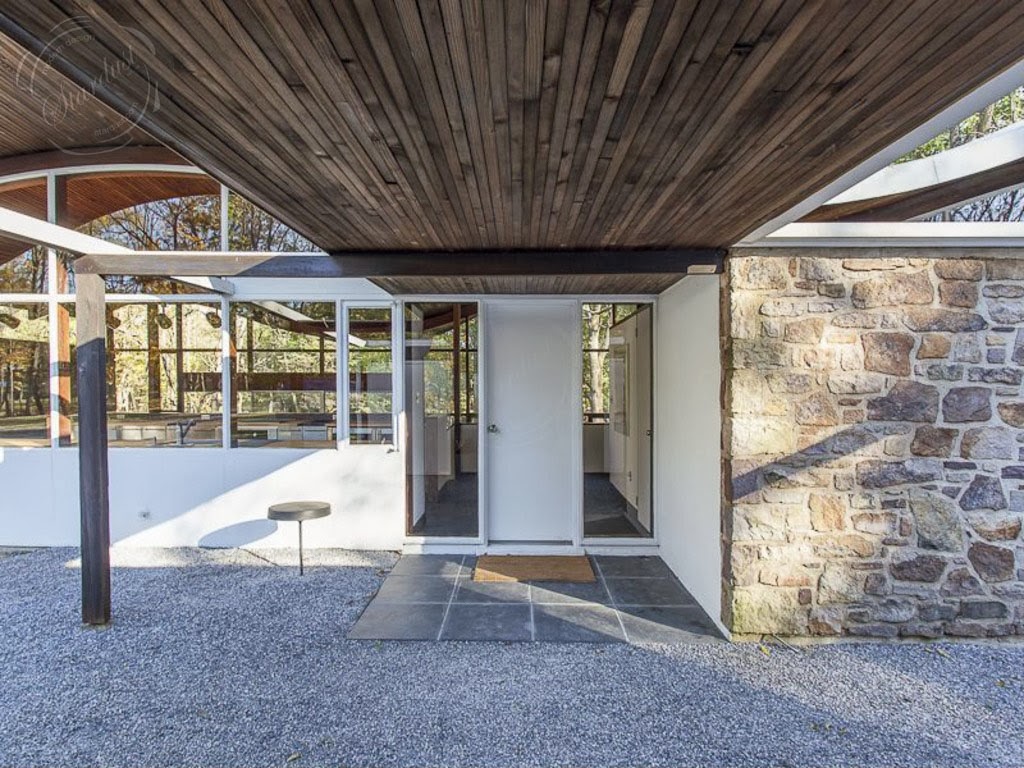 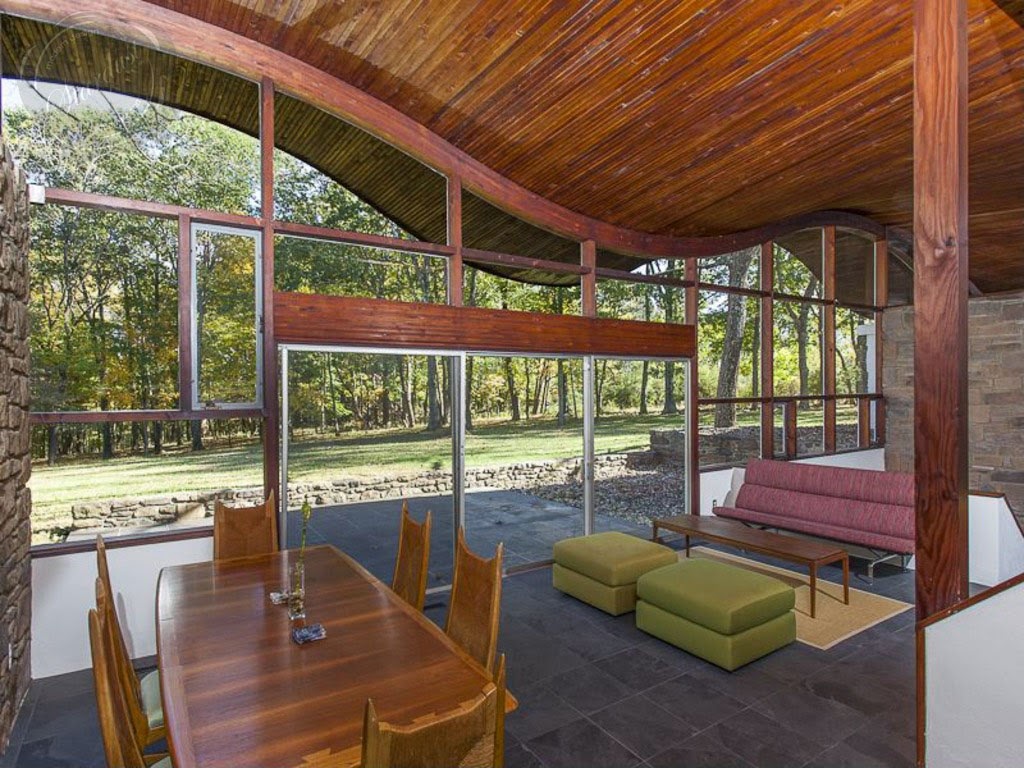 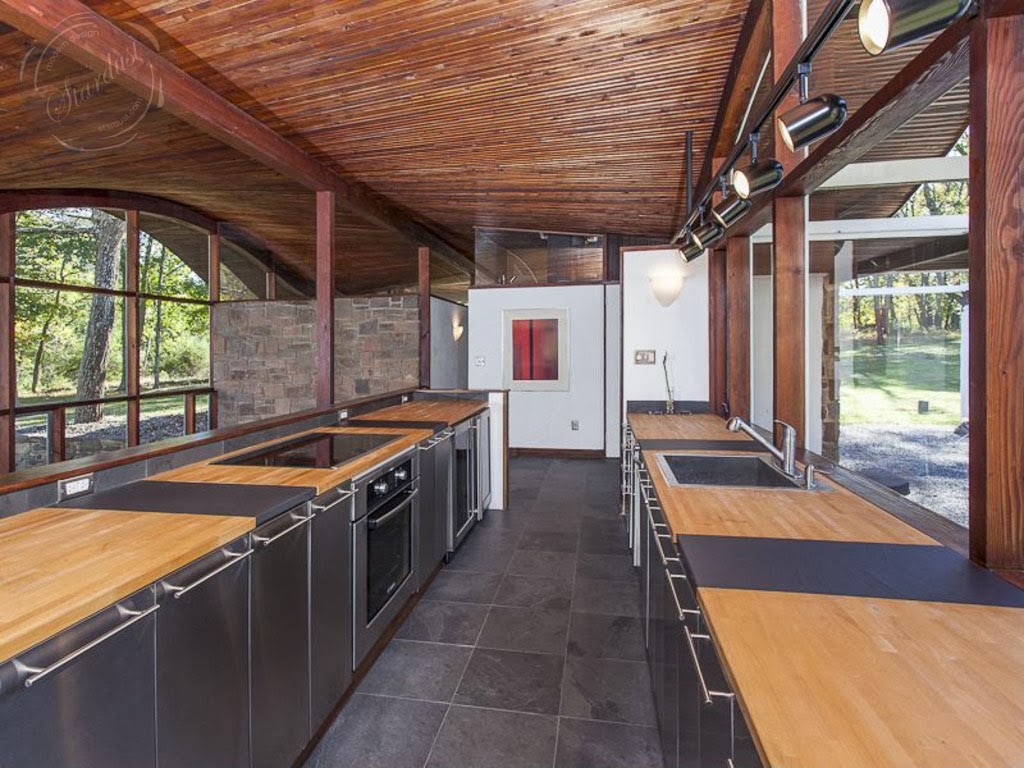 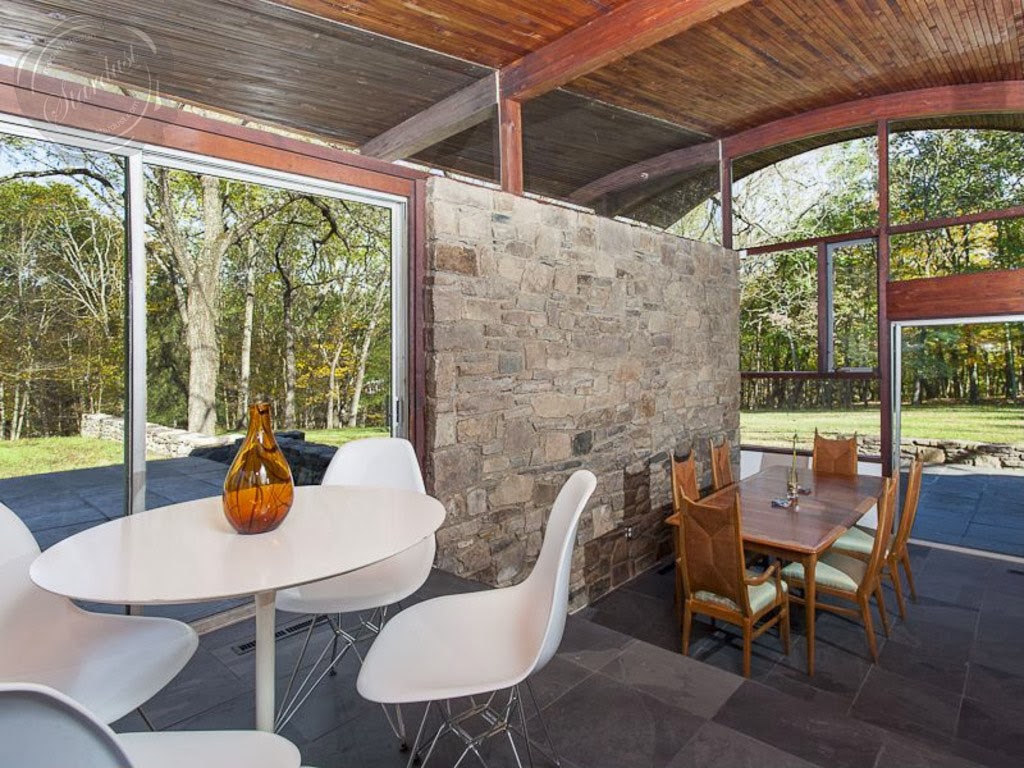 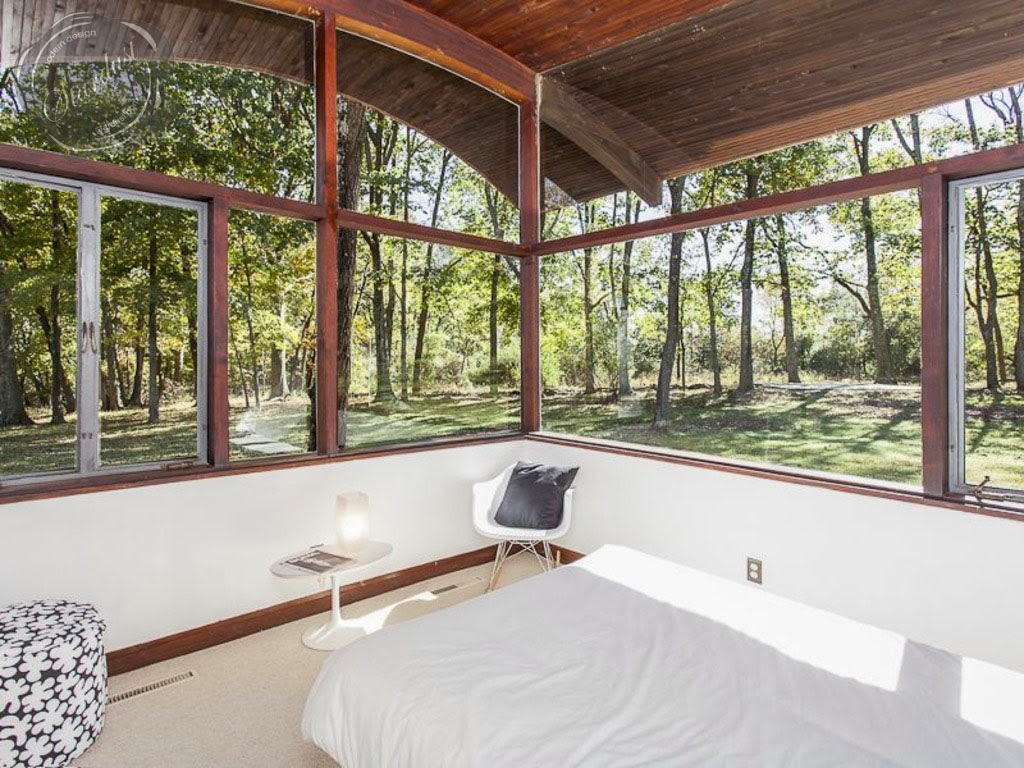 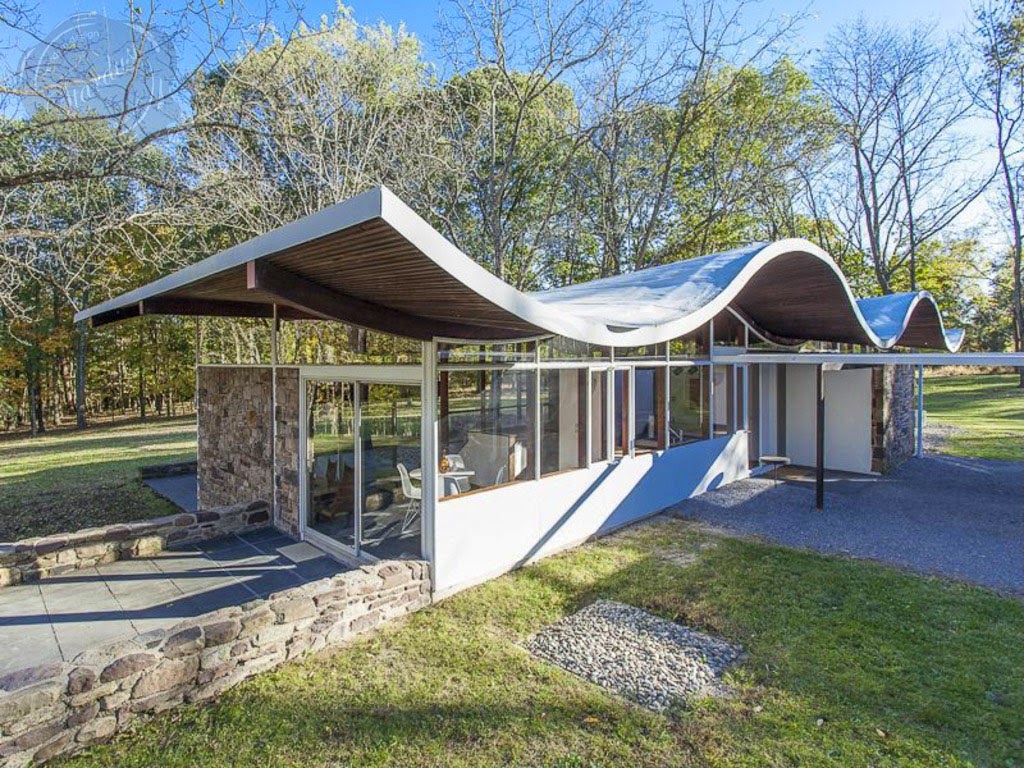 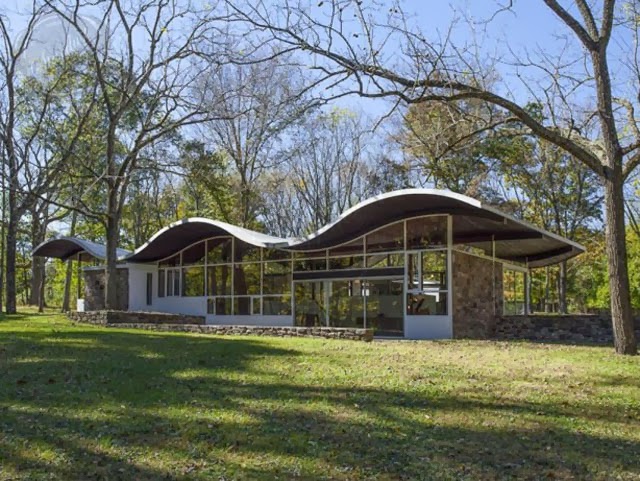