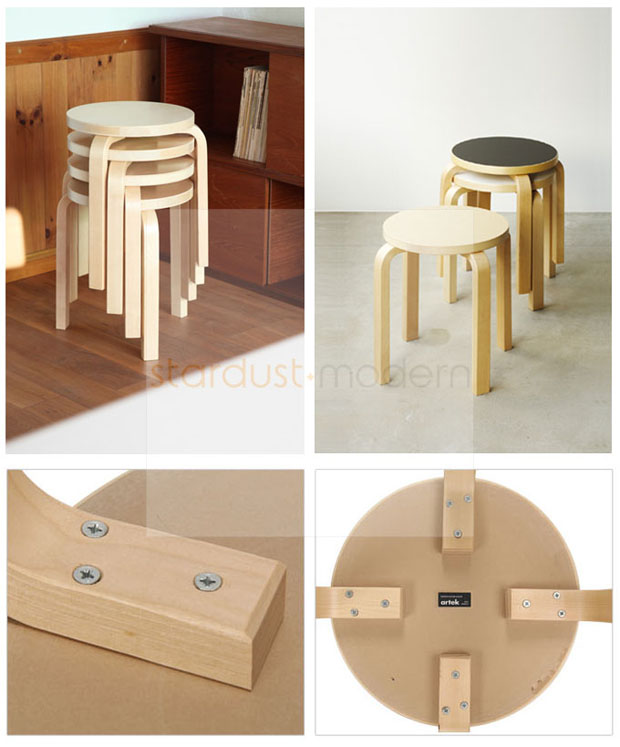 Alvar Aalto E60 Stool by Artek from 1933
Available from Stardust

To celebrate the 80th anniversary of a beloved piece of modern furniture, the Aalto Stool E60, Stardust is bringing back this beautiful example of Finnish design. The E60 stool designed by Alvar Aalto is one of the icons of furniture design and a Stardust Staff Pick.  Sleek, sophisticated and unmistakably modern.  Alvar Aalto’s four-legged stackable E60 stool was presented for the first time in 1933 and it was a sensation in the design world of his time. The stool's L-leg was revolutionary for its technical realization and it represented a boost for all the modern Scandinavian design. To bend the leg of Aalto’s stool, the same technique is still in use: a piece of straight, solid birch was sawn open at the end in the direction of the fibres, forming the shape of a fan. Thin pieces of plywood were then glued in the grooves. This structure makes it possible to bend the wood by heating or steaming the desired corner/angle and when dry it will have a very strong texture that can be easily joined to the seat of the stool. Aalto stool is still today a beautiful genious product, whose simple shape will always be modern.

This year the four-legged Alvar Aalto Stool E60, a classic of Scandinavian modernism, becomes an octogenarian. But despite its vintage it still looks as contemporary as ever, as do all of Alvar Aalto’s designs, including the three-legged Stool 60. For five years Aalto and Marsio conducted experiments together into the bending of wood (in a manner that would make Charles and Ray Eames famous as well).


Throughout 1932 the couple finally developed the distinctive bent L-shaped leg that made their design possible. Originally the stools were manufactured by Huonekalu-ja Rakennustyotehdas and were a great success. Which is why, in 1935, Aalto and his wife decided to form Artek; a furniture company that has produced them from birch veneer ever since.   The Alvar Aalto E60 Stool by Artek is now available through Stardust.