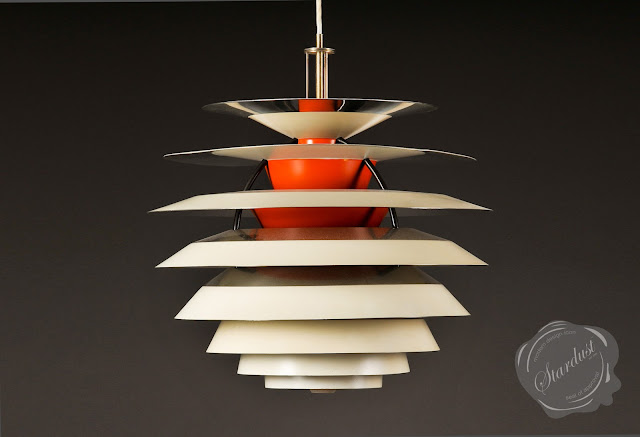 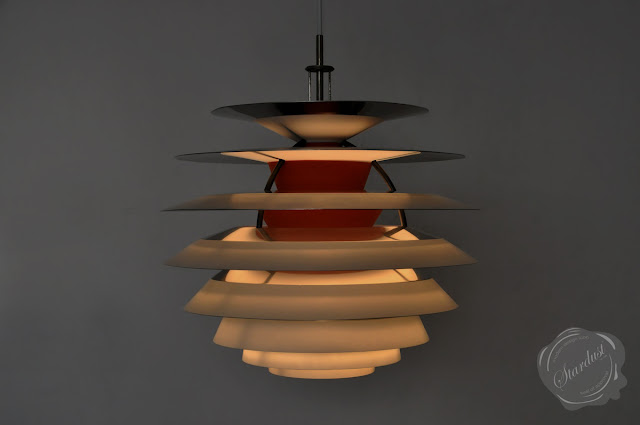 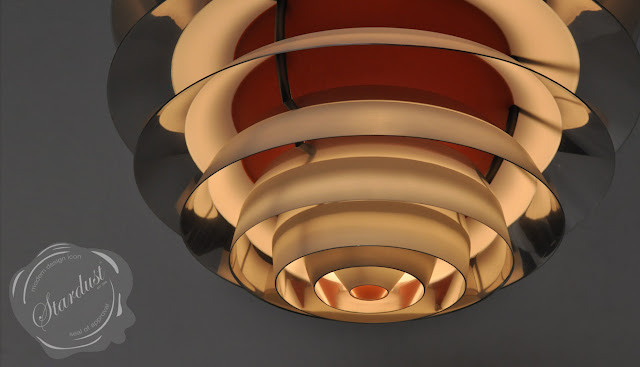 I requires an exceptionally gifted luminary to design a lamp like the PH-Kontrast.  The PH-Kontrast (often incorrectly named the PH-Contrast) is one of our favorite mid-century modern pendant lamps.  It took Danish designer Poul Henningsen 4 years to perfect it.  Its orange lacquered internal reflector creates a wonderful warm glow when lit.  Unfortunately it is no longer available; the lamp was taken out of production in the 1990s because it was too simply too expensive for Louis Poulsen to produce. You can still luck out since the lamp is occasionally offered through auction houses.  The PH-Kontrast consists of 10 shades. Each shade has four different surfaces: painted in white, blue and red and one polished. The bulb is placed in the center of the lamp centered and is adjustable vertical. The metal part in the top of the lamp is to adjust the bulb in up and down.

The lamp was unusually complicated to produce which attributes to the reason it is no longer available. The painting and coating of the varnish alone, took about 130 applications on each lamp; each of the ten shades had six areas, which in pairs had to be processed separate. Danish architect Poul Henningsen, known by his initials, PH was obsessed with light. He is the legendary creator of the lighting series carrying his name. He can be said to be the worlds first lighting architect. Poul Henningsen devoted his entire career to investigating the importance of light for our well being. He worked on the theory that the observer should not be subjected to direct glare from the electric light source. Henningsen used a series of layered shades to both spread the light and conceal the light bulb, thus creating a softer more diffused lighting.

One of Denmark's major figures in 20th-century lighting design, Poul Henningsen was also an independent architect, designer of theatre interiors and tubular steel furniture, critic, and editor of the magazine Kritisk Revy (Critical Review). Highly critical of the widespread lack of imagination in domestic lighting in Copenhagen, Henningsen came to prominence with the first of his multi-shade lamps designed in 1924, setting the pattern for his subsequent lighting work. Known as the Paris Lamp (and later as the PH lamp) it won a competition for a light fitting for the Paris Exposition des Arts Décoratifs et Industriels of 1925, where he was awarded a Gold Medal, and was put into production by the Danish lighting manufacturer Louis Poulsen. Henningsen's design principles were based on the scientific analysis of the ways in which lampshades distribute light, glare, and reflection. The PH lampshades were composed of a series of separate, interleaved elements that gently diffused the light throughout the space in which it was situated as well as directing it downwards.