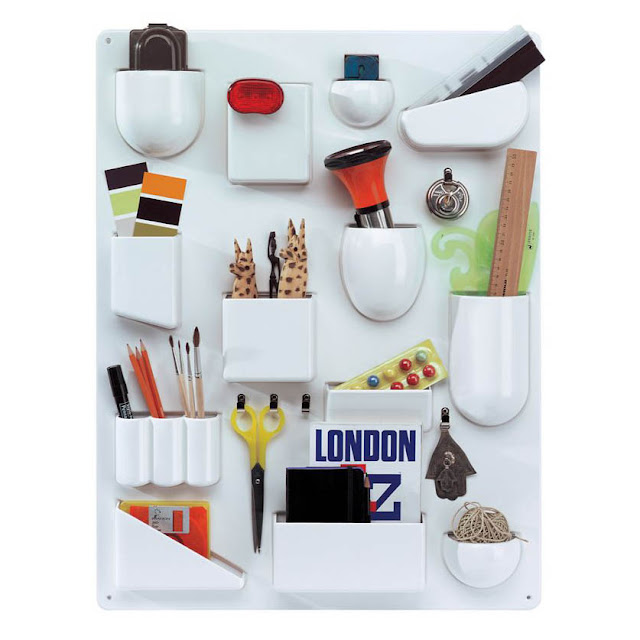 Absolutely our favorite organizer by far, the Uten.Silo (also known as the Utensilo or Uten Silo) was designed by notable German designer Dorothee Becker for Design M in Munich, West Germany, 1970. This is the small edition of the Uten.Silo (Uten.Silo II) which measures 26.75"H x 20.5"W x 2.5"D. Uten.Silo was initially called “Wall-All” and was put into production by Dorothee Becker’s husband, Ingo Maurer, who had a design company. Ingo Maurer believed so much in the Uten.Silo that he invested $200,000 of the company’s money to get the production off the ground (adjusted for inflation, this was a huge amount in 1970). The majority of the investment went toward producing a metal injection mold that weighed over three tons. The Uten.Silo became a huge success with many thousands of them sold throughout Europe, until plastics fell out of favor as a result of the oil crisis in the early ’70s. The Uten.Silo was discontinued until 2002, when the Vitra Design Museum reissued both the original 1969 version and a smaller one dating from 1970. This new Uten.Silo is made by Vitra in Europe under license of Dorothee Becker and Ingo Maurer. The Vitra Uten.Silo is available from Stardust with Free Shipping and a Low Price Guarantee.

Featuring containers in numerous shapes and sizes, metal hooks, and clips, Dorothee Becker's Uten.Silo (1969/1970) is perfect for organizing offices, kitchens, workshops, bathrooms and children's rooms. The German designer set out to create a practical and versatile storage solution – inspired by a multi-pocketed fabric storage system from her father's workshop – that was easy to mass produce in durable plastic. With financial backing from her husband, designer Ingo Mauer, Becker presented the Uten.Silo prototype at the Frankfurt Fair in 1969, and her design was a huge success. Unfortunately because of the oil embargo in the mid-70s, plastics became too costly to produce, and Uten.Silo fell out of production. That is until 2002, when the Vitra Design Museum reissued both the original 1969 version of Uten.Silo and a smaller one dating from 1970. Made in Germany.