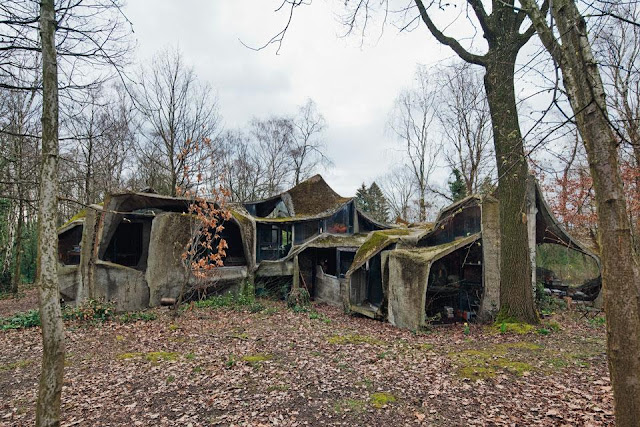 
Daringly different, the visionary 'Sculpture House' by Jacques Gillet from stands as testament of the exceptional architectural brilliance and uniqueness of the 1960s.  Like a mix between Barbarapa's Bubble House and the Charles Deaton Sculptured House from Woody Allen sci-fi comedy Sleeper. On a sad note, one can't wonder if it would be possible to build this amazing house today with the current code requirements... This amazing sculpture-for-living, a utopian dreamworld, was created by artist/architect Jacques Gillet in 1967. The use of raw concrete and formal expressiveness are directly linked with the Sculpture House project, begun in 1962 by architect Jacques Gillet, whose constructive principle and idea of intuitive creation challenge the aesthetics of postwar modernism and instead return to the ancient roots of human existence, nature and organic architecture. Gillet, born in Liège in 1931, completed his architectural studies in 1956 at the Académie des Beaux-Arts and began to explore novel forms of construction in concrete, culminating in the experimental form of the Sculpture House. 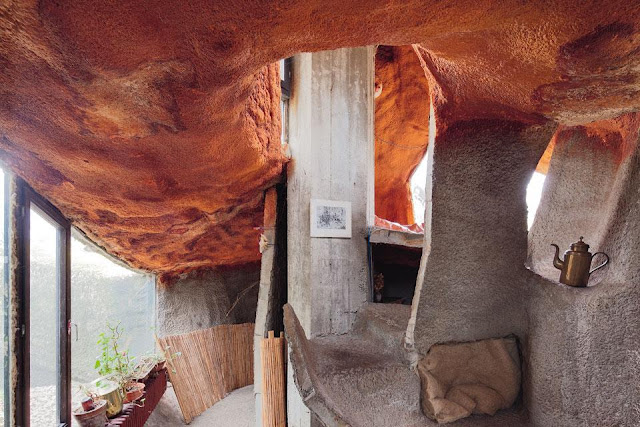 In an earlier project, Gillet was asked by engineer Jean-Marie Huberty to collaborate on the "aesthetic impression" of Huberty's own house in La Hulpe, near Brussels. Here, Gillet encountered the unexpected possibilities of concrete; for example, the roof was designed with Huberty and fellow civil engineer André Paduart as a shell of two parabolic hyperboloids, only five centimetres thick. Gillet immediately acknowledged the constructional and artistic qualities of the material, whose potential thinness he would go on to use in the Sculpture House. 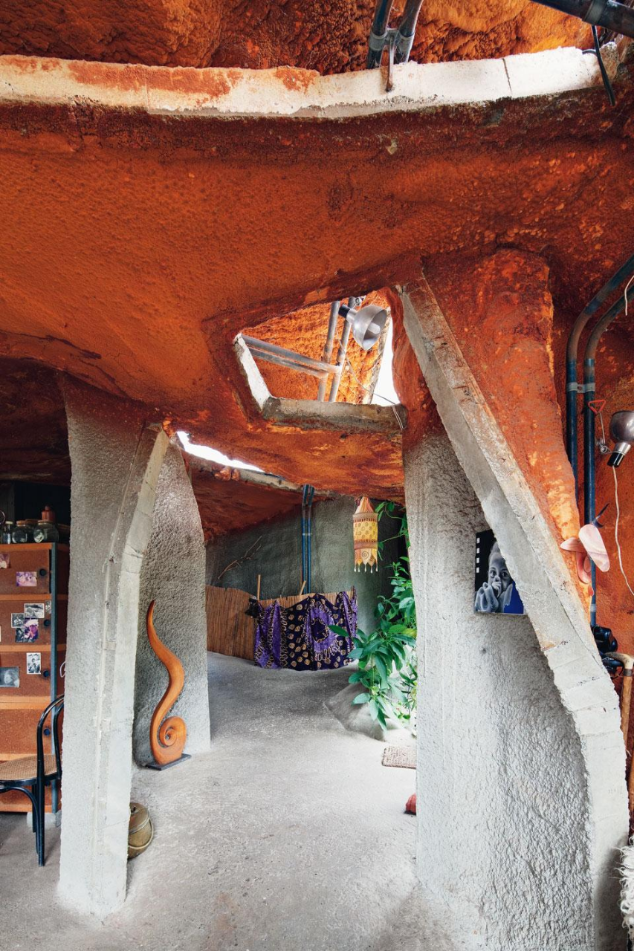 Before the project began, however, he met two soul mates — sculptor Félix Roulin (1931–) and engineer René Greisch (1929–2000) — whose artistic and engineering visions shared a holistic combination of architecture, art and science that would enhance their intuitive approach to creative work. After several joint projects (few of which were actually built), the trio was asked by Jacques Gillet's brother to design him a house in the suburbs of Liège. 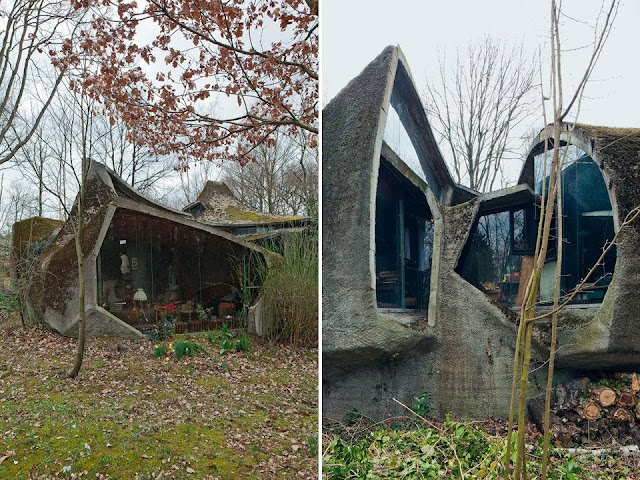 The creators' dream came true in 1967 as they began to build a living sculptural object, with almost no project plans. During the process of construction, a spontaneous organic architecture emerged, blending into its environment like a rock, as if it had stood there forever. As Jacques Gillet wrote in 1978, "What is a house, for our characters as individuals, for our family as an entity, for the education of our children, for this very place and for this particular time?" This house, in particular, grew up from the ground. 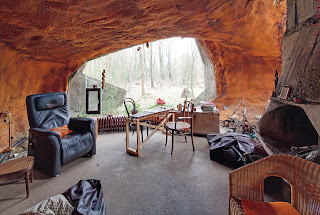 The creators aspired to an original design that would not only fit the specific needs of the architect's brother and his wife, but would also demonstrate the synthesis of different artistic and scientific fields, forming a complex inspired by nature. Criticisms of standardisation and strict modernism also played their part in the project. 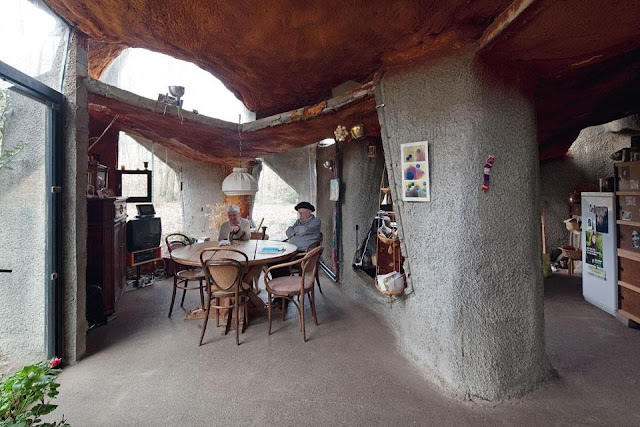 The house, whose moss-covered surface has become a natural residential element today, may be the best functioning result from the 1960s experiments in organic and utopian architecture. Alongside Gillet's house, Frederick Kiesler's Endless House, the sculptural houses by André Bloc, the utopian residential visions of the Archigram group, and the experimental 1960s Viennese school were searching for new forms of living and spatial experiments through a return to the past, to the time when mankind lived in caves, to the embryo ensconced in the womb of its mother. The sterile, clean spaces of functionalist houses were replaced by indefinite organic forms that merged naturally with human life. In this case, Gillet's design adapted to its inhabitants, the modern quotidian cave serving its purpose as well as any other house. Jacques Gillet's brother and his family have been living in this house for over 40 years; thus, architectural utopia has become a part of ordinary life. 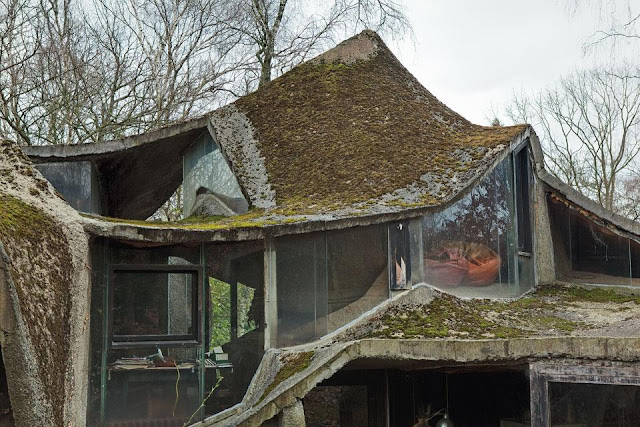 The house was constructed of steel mesh formed in an organic shape around several solid elements, including the concrete floor and chimneys. Its precise location was not predetermined; rather, the designers experimented on site to define the final placement of the walls, using a pliable grid of eight-millimetre- wide steel rods. Next, the designers used a special spraying technique to apply concrete onto the net, forming a five-centimetre-thick solid layer. The spraying was performed by the Pasek company, specialising since 1960 in the application of dry concrete and plaster using a special Refra- Gun nozzle, a process that had to be constantly monitored by workers to ensure even coverage. The final concrete shell was then completed with large window frames, contrasting with the organic concrete envelope and creating unexpected views from the interior out and the exterior in. Inside, the surface of the shell was finished with a sprayed layer of isolating polyurethane foam. After 14 months of work, the house was completed in 1968. If the exterior alludes to natural rock, the interior of the house forms a bright, comfortable cave, echoing the impression of a prehistoric or nomadic dwelling. The main living area, with a living room, dining room and kitchen, is a freely linked space that opens onto the landscape through the large windows. The house has no stairs; the inhabitants access the different floor heights via concrete ramps or irregular steps that recall well-trodden paths in rocky forest grounds. The house is simultaneously an adventurous site and the host of the everyday life of its inhabitants. 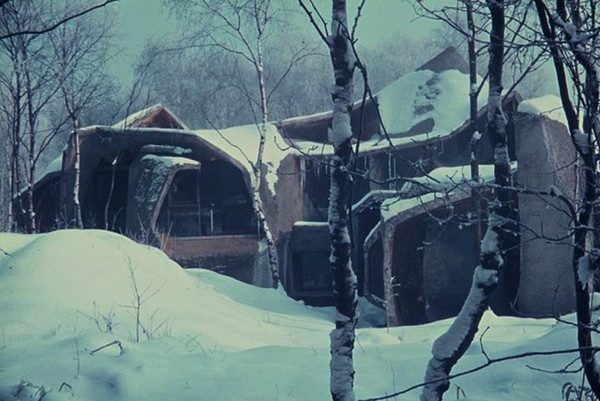 The team, made up of architect Gillet, sculptor Roulin and engineer Greisch, has completed no comparable works since the Sculpture House. Gillet worked as a professor of architecture at the University of Liège and promoted organic architecture through his contact with international practitioners. He invited the legendary Bruce Goff to Liège for a lecture in 1972, inspiring a number of young Belgian architects of the time. Like some of Goff's organic houses in the USA, the Sculpture House in Liège remains an extraordinary example of intuitive architecture, standing out from all the stylistic categorisations and movements. Adam. 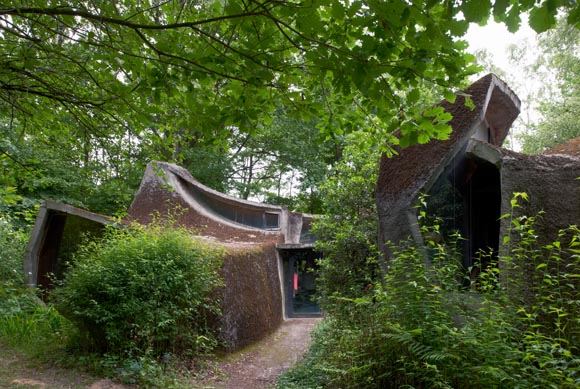 This article was previously published in the Italian design magazine Domus.