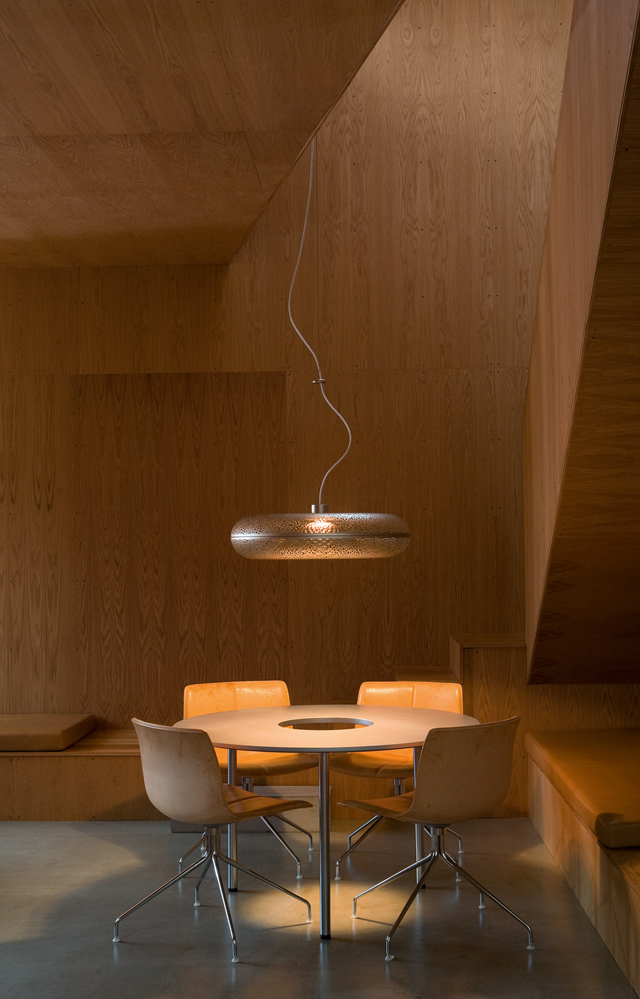 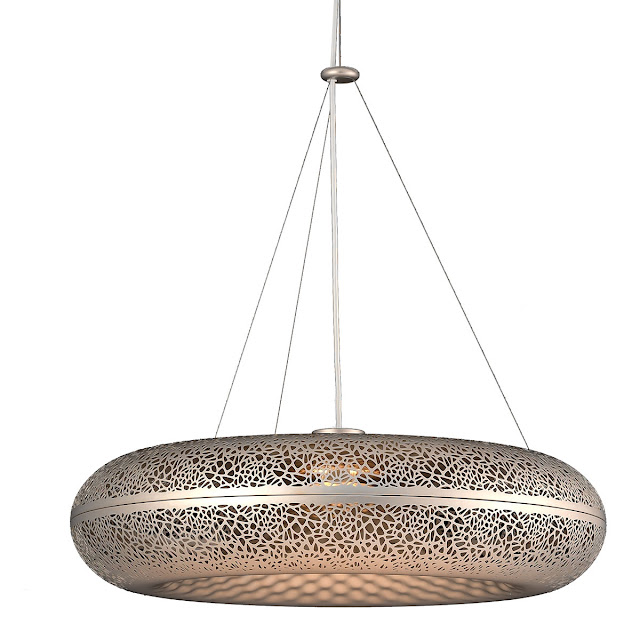 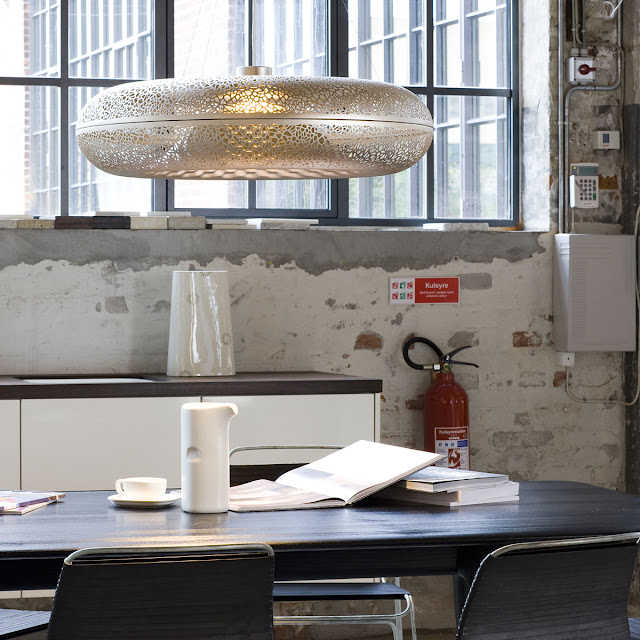 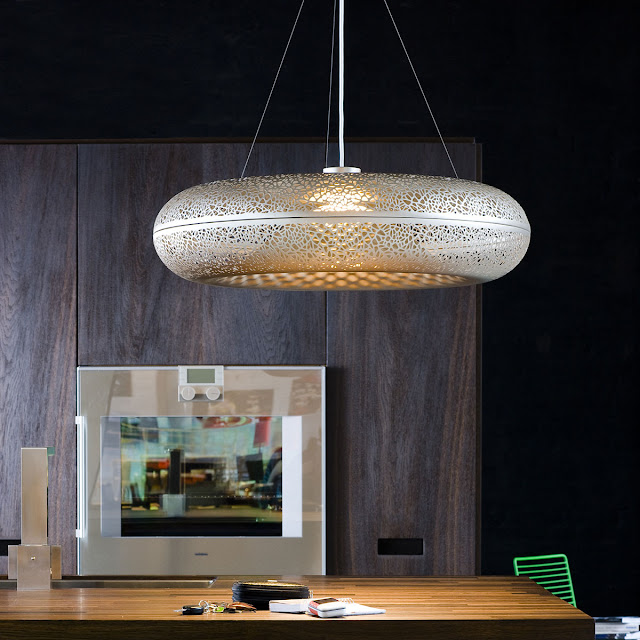 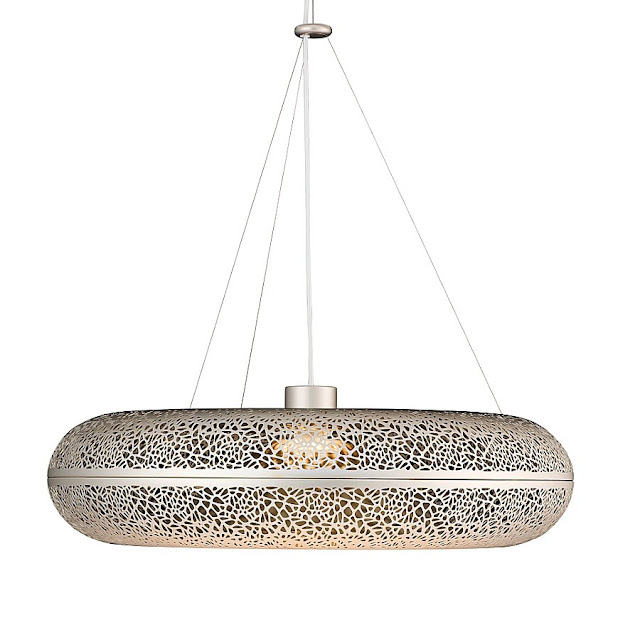 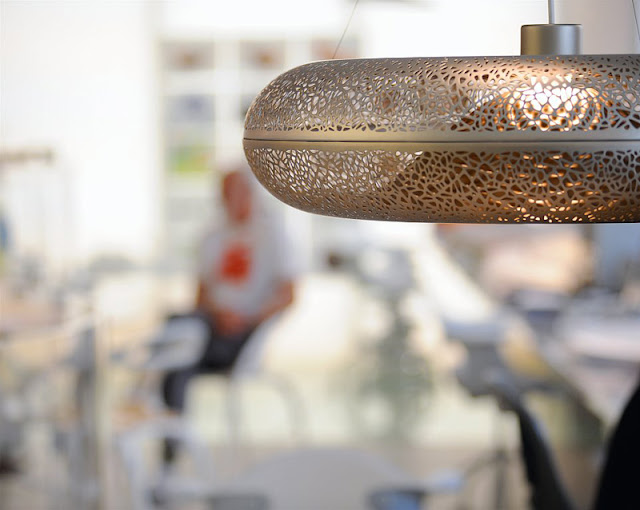 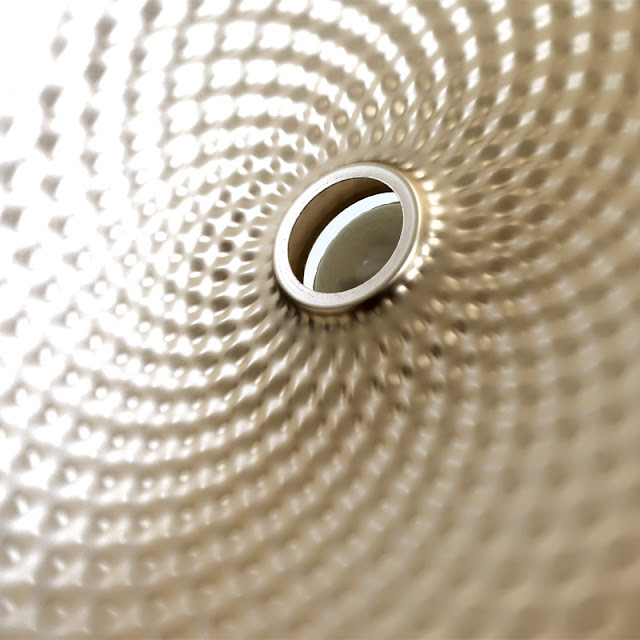 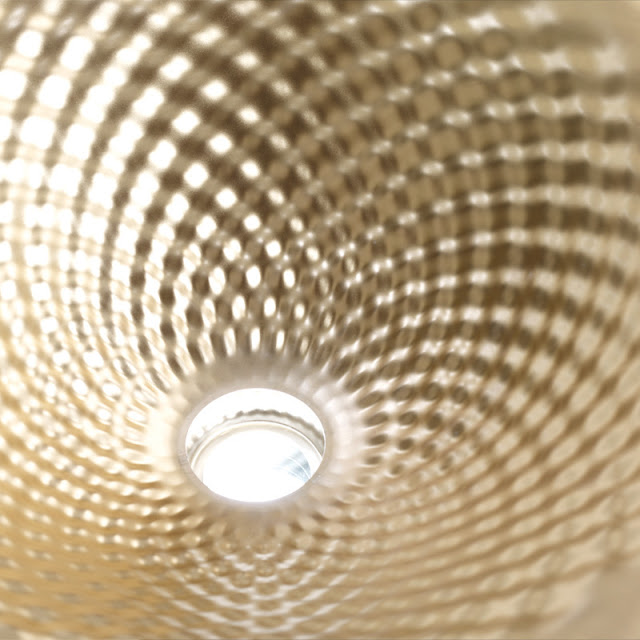 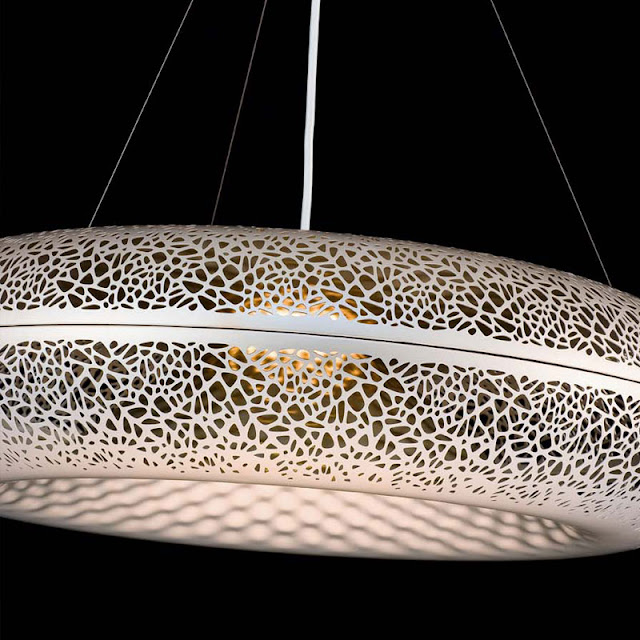 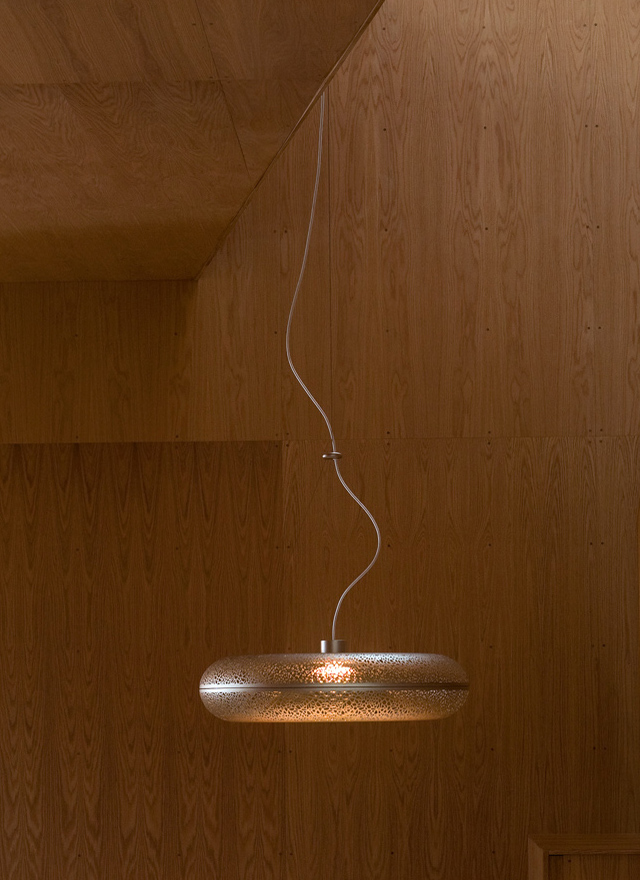 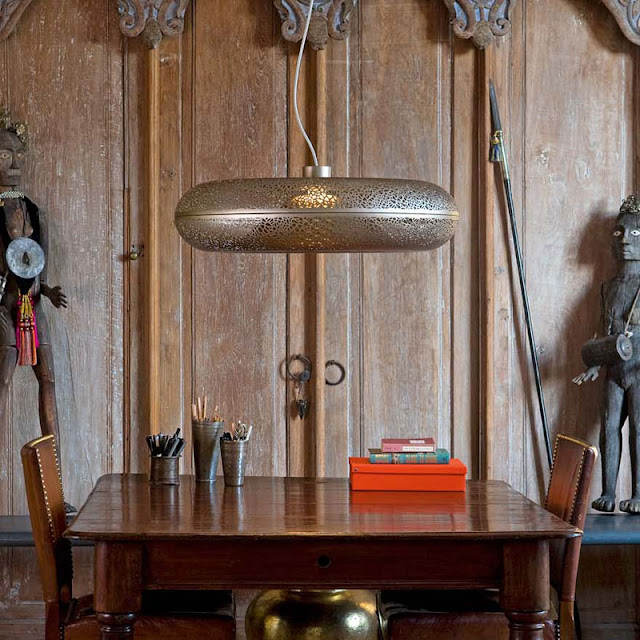 Ross Lovegrove Ross Lovegrove Aeros; Louis Poulsen introduces the sculptural Aeros pendant designed by internationally renowned designer Ross Lovegrove. With its exceptional light distribution, Aeros demonstrates a fresh interpretation of Louis Poulsen´s lighting philosophy. Aeros immediately draws the eye. An ethereal, floating object with an exquisitely perforated surface at once luminous and shielded. Aeros exudes an elegant mystique reminiscent of Byzantine decoration. Aeros is equally ultramodern, and its advanced design made technical production a major challenge. The creative look of Aeros is the result of a combination of innovative technology and a well-balanced object-like design. The pendant fixture seems to float ethereally in space and calls up associations of Byzantine art and organic tissue structures. The corpus is made of anodised deep-drawn aluminium and holds a shade made of acrylic Satiné that both shields and spreads light. Aeros instantly wakes attention: ether, floating object that shines through its finely patterned surface and is shielded at the same time. Aeros acts mysterious and possesses a beauty that reminds of Byzantine art. 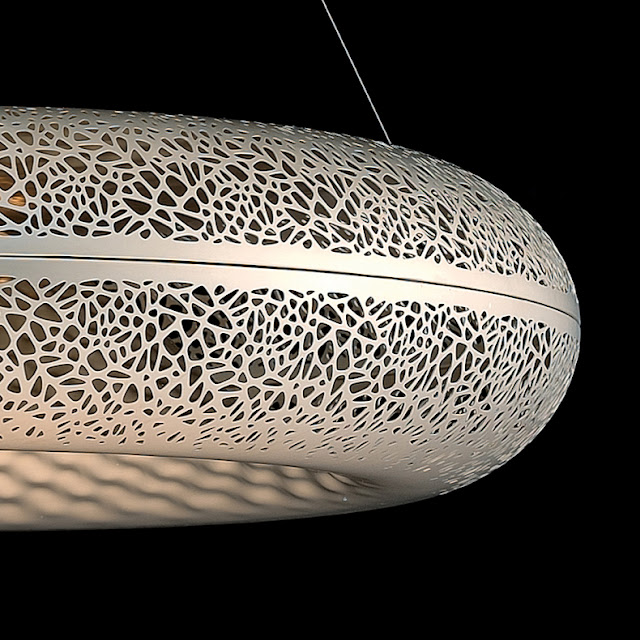 Designed by Ross Lovegrove for Louis Poulsen in Denmark
The point of departure for the Aeros design was the organic structures of the bone tissue. The wave formed embossing of the reflector forms a Fibonacci-pattern, named after the Italian mathematician who lived in the beginning of the 13th century. He found mathematical formulas with which he could describe patterns of nature, for example those of the fir cone. Thereby Aeros is ultramodern and its high quality design makes the highest demands to technical manufacture. With its Sculptural beauty, its shielded illuminant and the pleasant light Aeros fulfils all demands of the illumination philosophy from Louis Poulsen. The reflector has been executed with a holes-pattern in the rounded space. The light is directly lead downwards; a small amount however, goes vertically through the holes pattern. That is how Aeros can be suspended relatively low on top of a table, but it can be hanged higher still without disturbing the light development. The lamp is suitable for private domiciles, but also for conference rooms, restaurants, bars and reception areas. Aeros is a product out of the cooperation from the legendary Danish lamps manufacturer Louis Poulsen with the Welshman Ross Lovegrove who doubtlessly counts to the most important product designers of our time. His approach to Aeros is described by Lovegrove as follows: ”In Aeros I tried to catch the thought that went into the design of the Artichoke [legendary Puolsen-Lamp out of the year 1958] 50 years ago and to transfer even that thought into our time with contemporaneous process technology.” 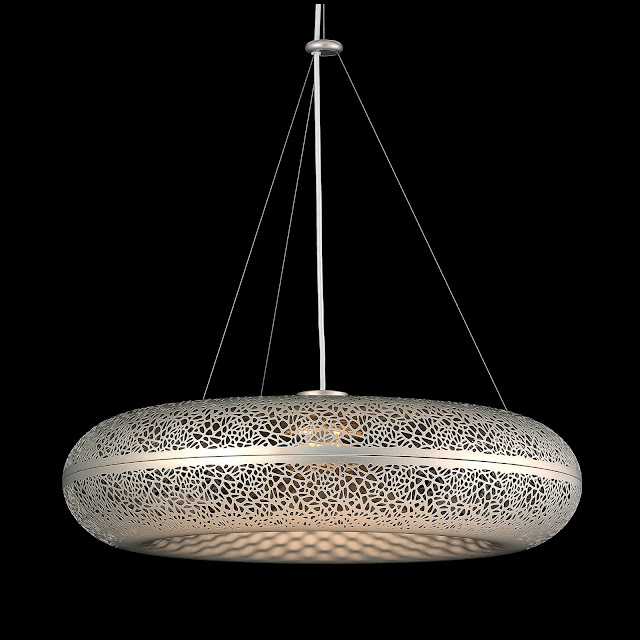