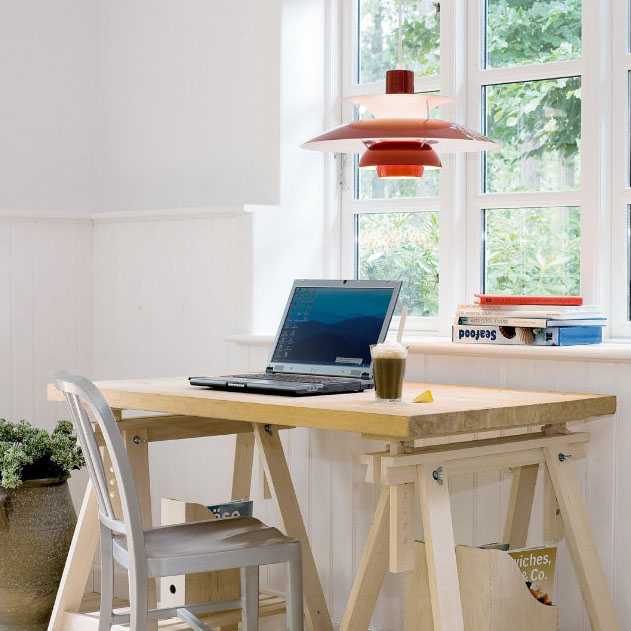 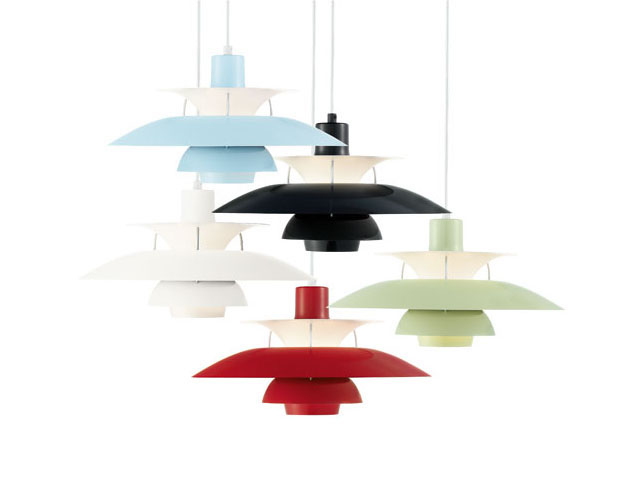 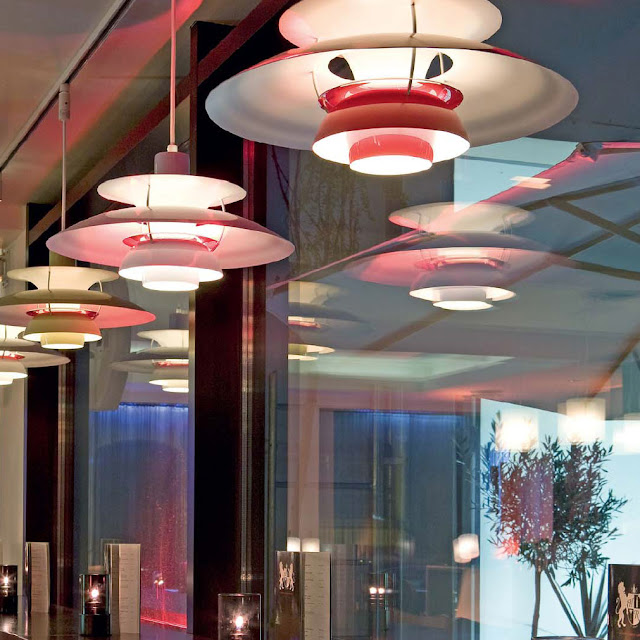 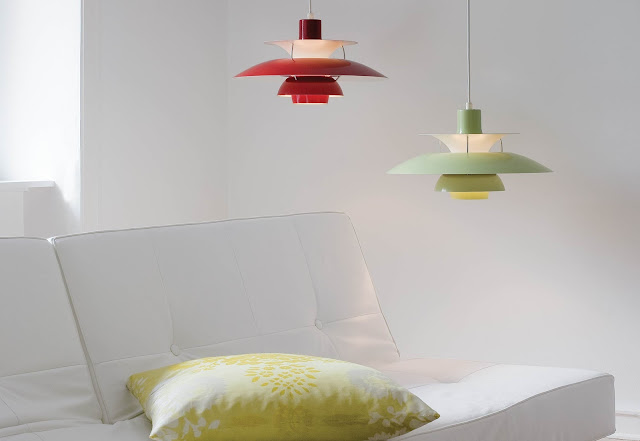 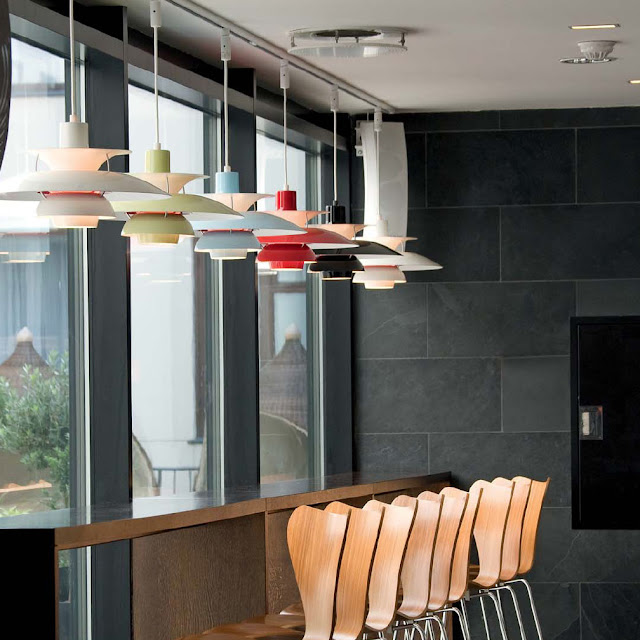 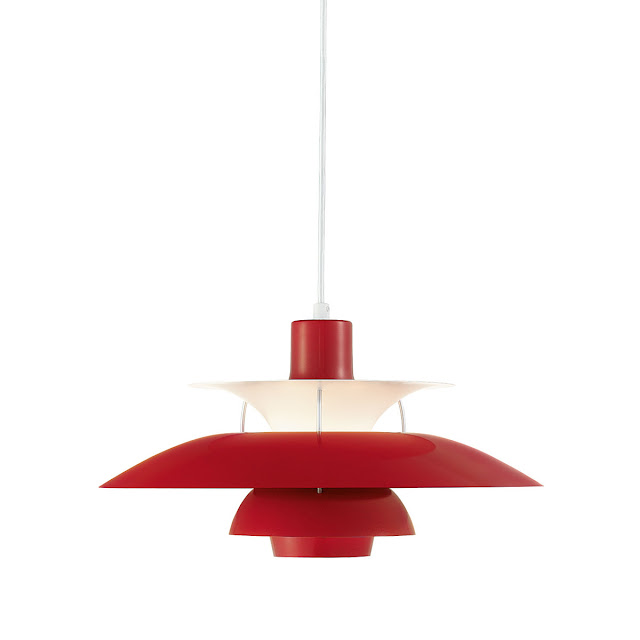 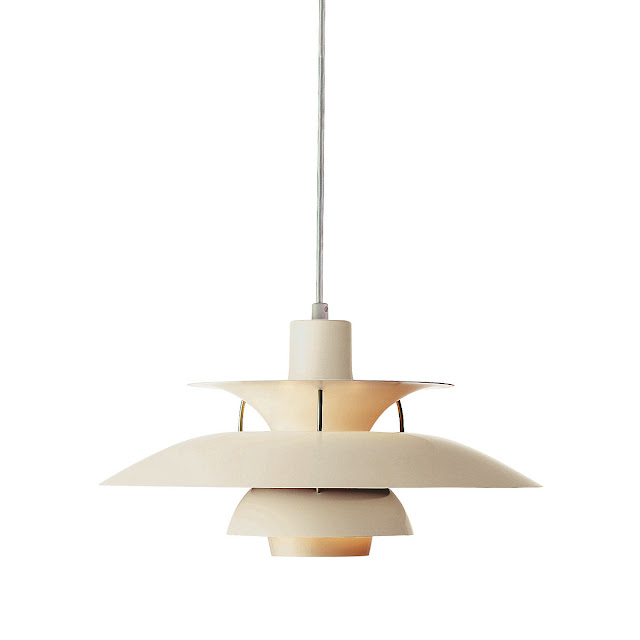 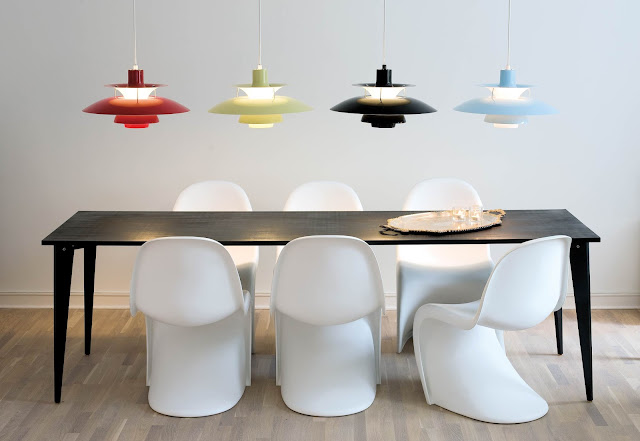 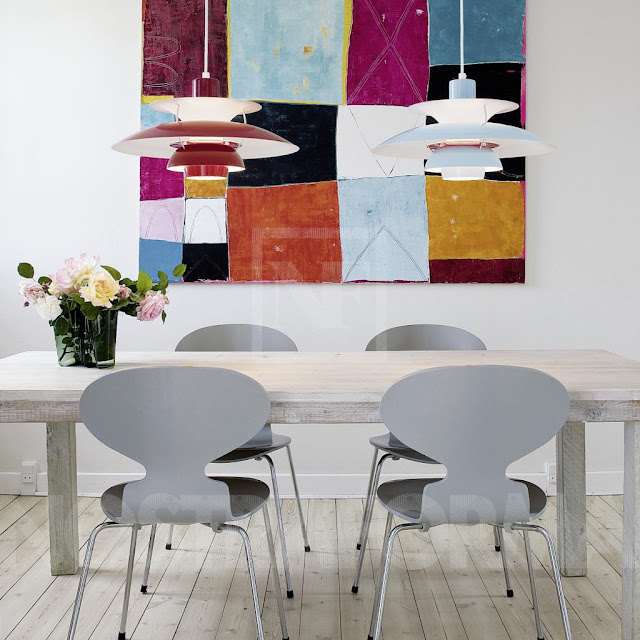 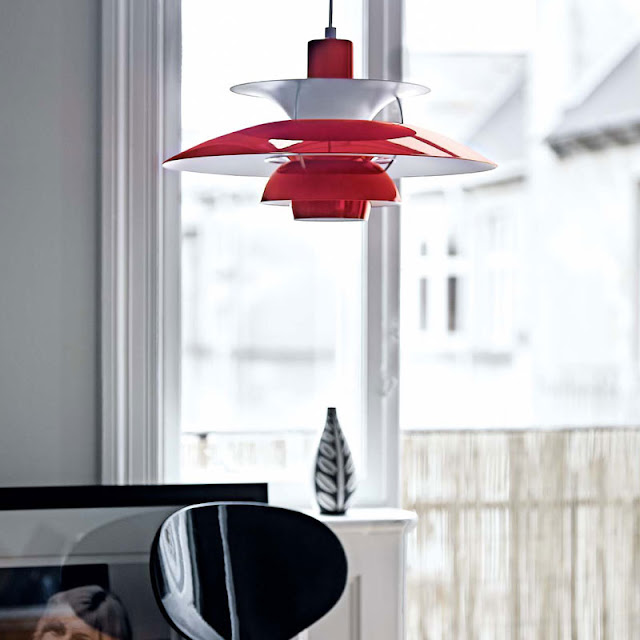 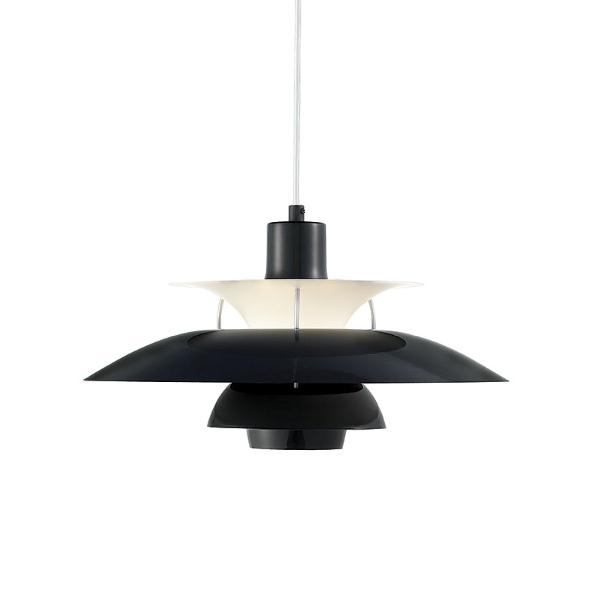 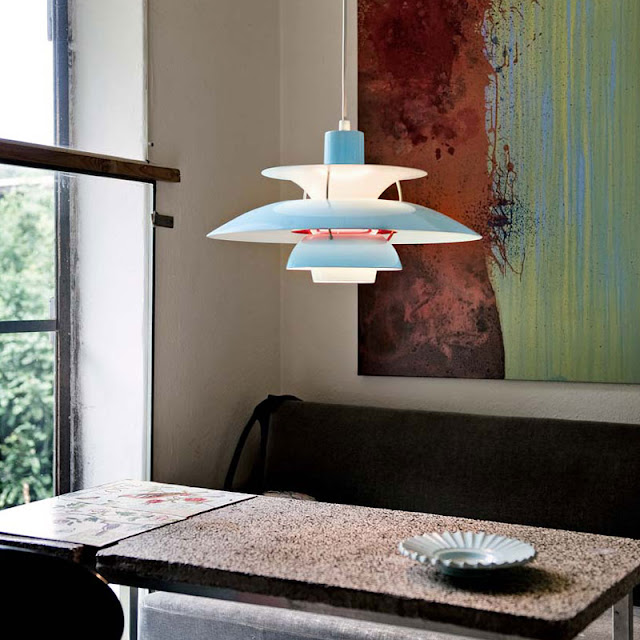 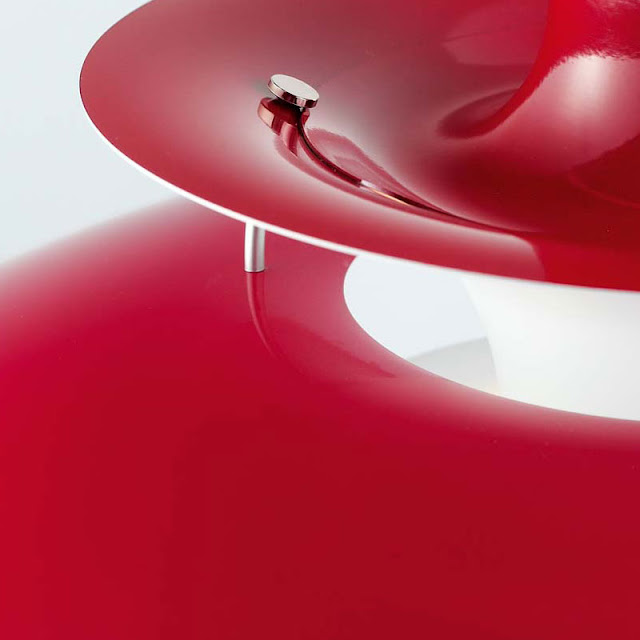 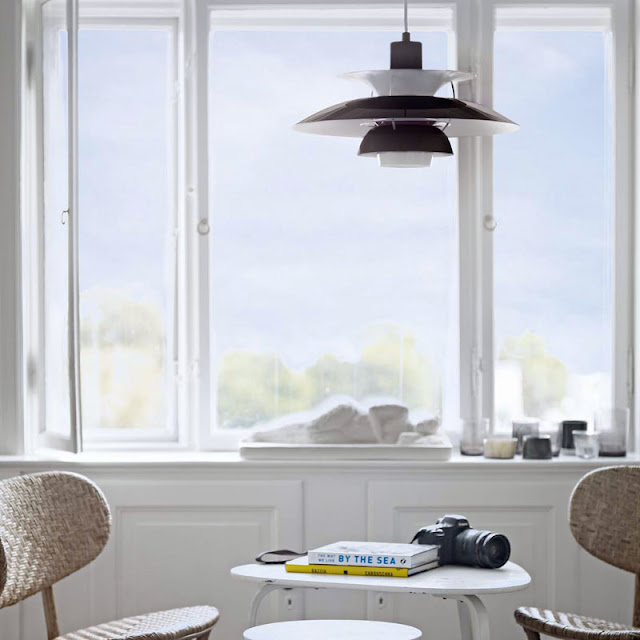 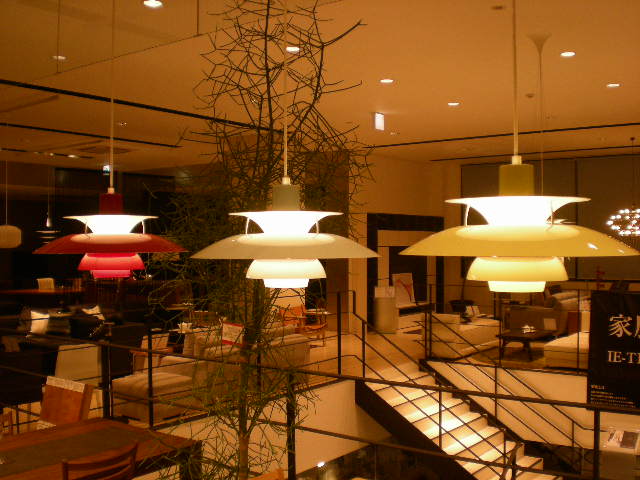 Poul Henningsen designed the PH5 lamp for Louis Poulsen in 1958. The PH5 lamp is considered to be a classical masterpiece and the ultimate functional style icon. Poul Henningsen named it the PH5 because the diameter of the top shade is 50 cm. Having graced the halls of universities, restaurants and libraries in Europe for decades, the PH5 Pendant Lamp is one of Poul Henningsen's most recognizable lighting designs. Constructed by Louis Poulsen, the original manufacturer since 1958, the shade comprises layers of varying sizes and shapes that direct light both horizontally and vertically. To lend further warmth to the quality of light, Henningsen ingeniously applied primary red to the interior of the inside cone and blue to the smallest reflector to absorb both light spectrums. Striking in form, but compact enough to be used in multiples, it is a versatile design statement for residential and commercial spaces. The PH5 lamp has been part of Danish cultural heritage for generations and very many Danish households across all income groups have today a PH5 hanging at home. After 50 years of glare-free illumination, the PH 5 is celebrating its 1958 conception by introducing an exciting new spin-off, the PH 50. The PH 50 captures the spirit of the 4-shade design but spices up the classic luminaire with five new color options – Chili Red, Mint Blue, Wasabi Green, Coconut White and Olive Black. The PH 1950's vibrant flair comes not only from the five color options but also from its new lustrous finish. While the classic PH 5 was designed with a matte finish, the PH 50 has glossy surfaces that reflect light off the colored shades. The PH 50 adds a colorful decorative element to any space. The pendant was designed to hang low above a table while at the same time giving a moderate light to the surroundings. The design of the visible reflectors ensures that light is directed both vertically and horizontally. Regardless of how the lamp is installed and no matter which incandescent bulb it is furnished with, the PH 5 was and is completely glare-free. In Denmark you will see that approximately one in every two homes has a PH5 pendant.

The Poul Henningsen PH 50 Pendant Lamp is called a PH 50 because the diameter of the top shade is 50 cm. The number “5” refers to 5 dm=50 cm. The PH 50 consists of three reflecting shades, a cone and two smaller colored shades (red and blue) designed to improve the light source’s color rendering properties. Red and blue was a natural choice because these two colors belong to the spectrum of which the human eye is least sensitive, and at the same time they weaken the yellow/green spectrum where the eye is most sensitive.

Poul Henningsen was born in Copenhagen to the famous Danish actress Agnes Henningsen. He never graduated as an architect, but studied at The Technical School at Frederiksberg, Denmark from 1911-14, and then at Technical College in Copenhagen from 1914-17.

He started practicing traditional functionalistic architecture, but over the years his professional interests changed to focus mainly on lighting which is what he is most famous for. He also expanded his field of occupation into areas of writing, becoming a journalist and an author. For a short period at the beginning of WWII, he was the head architect of the Tivoli Gardens in Copenhagen. But like many other creative people, he was forced to flee Denmark during the German occupation but soon became a vital part of the Danish colony of artists living in Sweden.

His lifelong collaboration with Louis Poulsen Lighting began in 1925 and lasted until his death. To this day, Louis Poulsen Lighting still benefits from his genius. Poul Henningsen was also the first editor of the company magazine “NYT”. The CEO of Louis Poulsen at the time, Sophus Kaastrup-Olsen, gave the magazine to PH as a gift because he had been terminated from the Danish newspaper he worked for (his opinions were too radical).