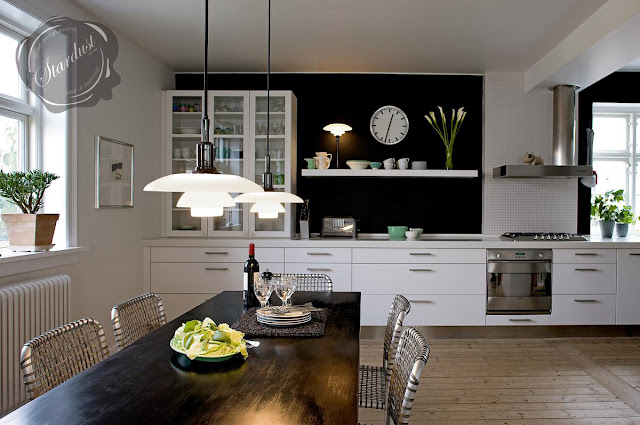 PH 3-SHADE Poul Henningsen Modern Glass Suspension Light - The Louis Poulsen PH 3/2 Pendant Lamp by Poul Henningsen creates glare free light - reflections from shades are drawn over a logarithmic spiral - shades corresponds in a relationship of 3:2:1. Each shade evenly decreases the amount of light. PH 3/2 pendant is a member of the of the PH 3-shade family principles, which were developed in the winter of 1925-26 for a large exhibition hall in Copenhagen, Denmark called "Forum". The combination of diffused reflection and a logarithmic shade curve gave PH the opportunity to control a fixture's glare and shading, as each shade would evenly decrease the amount of light emitted according to their distance from the bulb. The PH fixtures were designed as a rational lighting system where the size of the shade, its material, and its surfaces could be combined mutually according to the nature of the assignment. The PH3-shade system started out as a pendant solution but very quickly it also developed into other kinds of fixtures and chandeliers. Poul Henningson's lifelong collaboration with Louis Poulsen Lighting began in 1925 and lasted until his death. To this day, Louis Poulsen Lighting still benefits from his genius. Poul Henningsen's pioneering work concerning the relations between light structures, shadows, glare, and color reproduction-compared to man's need for light remains the foundation of the lighting theories still practiced by Louis Poulsen Lighting. PH 3/2 pendant provides soft illumination. It is based on the principle of a reflecting multi-shade system, producing glare free illumination.