Akari™ Isamu Noguchi 1-Lamp Japanese Paper-Shades Lantern Pendant Light Fixtures are now available in all sizes from Stardust.com. 'The light of Akari is like the light of the sun filtered through the paper of shoji. The harshness of electricity is thus transformed through the magic of paper back to the light of our origin – the sun – so that its warmth may continue to fill our rooms at night.' - Isamu Noguchi

In 1951 Isamu Noguchi began to design the Akari Light Sculptures, works characterised by weightless luminosity. He chose the name 'akari' for these objects, a word that means 'light' in Japanese, connoting both illumination and physical lightness. During a journey to Japan, Noguchi paid a visit to Gifu, a town known for its manufacture of paper parasols and lanterns. While there he sketched his first two Akari Light Sculptures, and over the following years he created a total of more than 100 models, consisting of table, floor and ceiling lamps ranging in size from 24 to 290 cm.

The round Akari lamps are available with either straight bamboo ribbing or with a wavy bamboo pattern.

Each luminaire is meticulously crafted by hand in the Ozeki workshop, a traditional family-run company based in Gifu. In a first step, bamboo rods are stretched across the original wooden forms designed by Noguchi to make the framework that determines the object's shape. Handmade shoji paper, derived from the bark of the mulberry tree, is cut in strips to fit the size and shape of the lamp and then glued to the bamboo ribbing. After the glue has dried, the wooden form is removed and the shade can be folded. The Akari Light Sculptures are packed for shipping or storage in flat boxes developed especially for the luminaires.

Lampshades: shoji paper, some partially painted. Some models with end pieces in wood/bamboo.

The "AKARI Series"were first produced by Isamu Noguchi in 1951and to the present over 100 models have been released, and these are loved by people all over the world today. 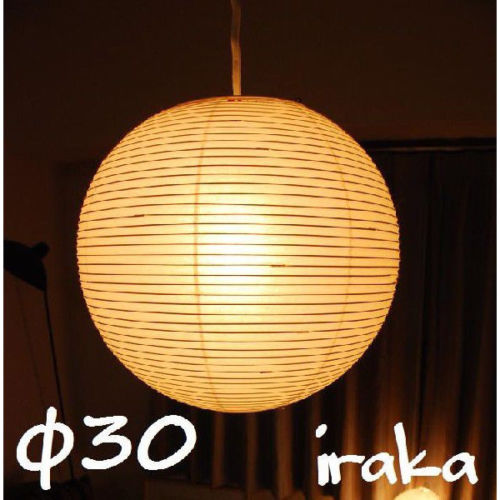 The Akari are made from the all natural materials of paper and bamboo and wood, and with gentle light shining through the washi paper which is known as Isamu Noguchi's "Light Sculptures", the refined design gives relaxation and joy. 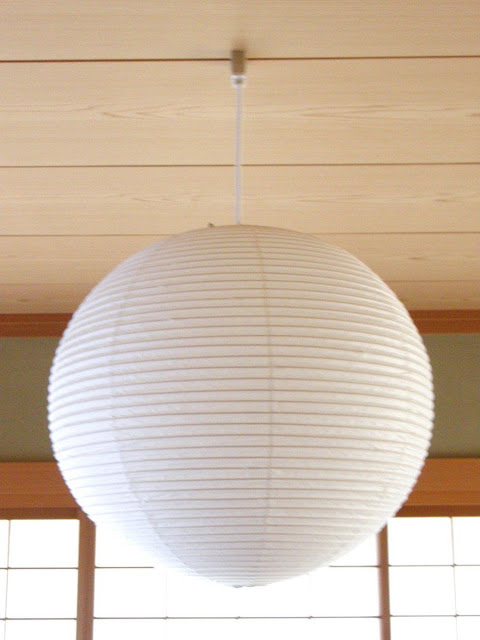 Born 1904 in California, Isamu Noguchi was one of the 20th century's most influential designers. From his designs for the home to landscape architecture, Noguchi is renowned for his simple, sculptural style, inspired by his Japanese ancestry and merged with the pioneering mid-century modern movement that was emerging in America at the time. 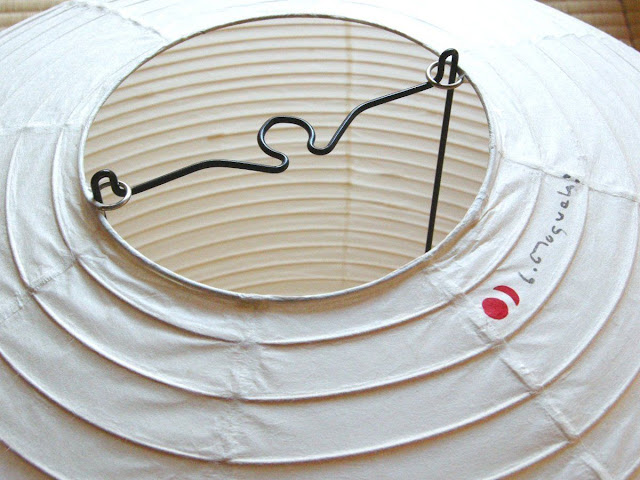 “AKARI”is the name given to the illuminated, sculpted lantern style resulting from the merging of Isamu Noguchi and Gifu’s traditional craftwork in 1952. 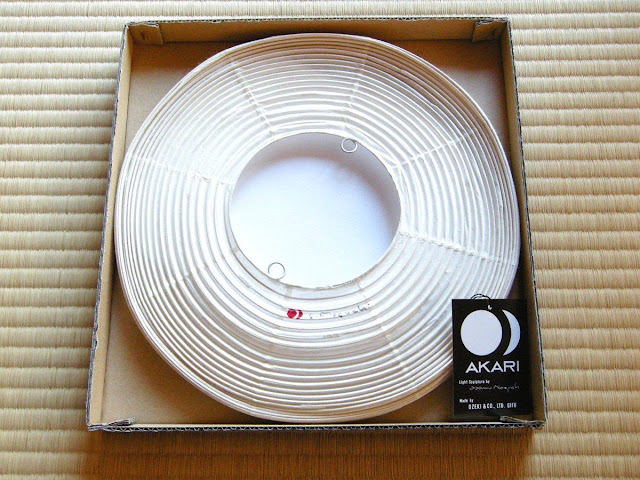 The gentle light-dispersing quality of the Japanese paper and irregular engulfment of the bamboo framework serves not only as a source of illumination, but also to carve the light with every wrinkle. The absolute attention to quality material makes it clear that this is a traditional art of Japan. Moreover, the lightness of the AKARI lanterns speaks of the transient quality characteristic of Japanese craftsmanship since antiquity.


Isamu Noguchi’s products are recognized around the world as a prime example of an attempt to revive beautiful and uniquely Japanese crafts. Beginning with Noguchi being awarded first place in a Japanese Good Design Contest at the New York Museum of Modern Art, his products have become loved in homes and shops in several countries.

Isamu Noguchi has said, “I call this creation “AKARI”. It is not a lantern (“chouchin” in Japanese).” The word “akari” in Japanese gives the image of sunlight and moonlight pouring out into a room. Even the Chinese characters used (sun and moon) to create the word tell this story. With the extreme modernization and mechanization of society, modern people long for something as simple as natural light. With light passing through Japanese paper, just the right amount of dispersal softens the light so that it flows into an entire room gently. AKARI is sculpted in just such a way. When speaking about AKARI to others, please mention its intentionally shadow-less construction. Let me also say this: paper, bamboo, wood, and other traditional materials have a certain effective beauty that goes without saying. Glass and plastic...do not. I wasn’t raised in Japan; so traditional lanterns allow me to feel the deep meaning of living in the old tatami-mat style. The 1951 AKARI Series has since seen the release of over 100 products including the UF Series from the 1980’s, and has been applauded and loved by people all over the world.


Envisioned as a modern interpretation of traditional Japanese lanterns, Akari Lamps were created in the 1950s by Japanese-American sculptor and designer Isamu Noguchi and they remain essential classics today. Hand crafted by a cottage industry in Japan of mulberry paper over a bamboo structure, they create a soft, welcoming light in any interior application. No comparison to low-quality copies, each Akari piece features a symbol of authenticity as an authorized edition of the Isamu Noguchi Foundation.

View all Akari Lamps from Isamu Noguchi at Stardust.com

The story of Akari began when Noguchi visited Gifu City, about 270km west of Tokyo, to see cormorant fishing on the Nagara River. Hemmed in by mountains, Gifu Prefecture is known for its traditional crafts: the making of chôchin (lanterns), wagasa (traditional umbrellas), uchiwa (bamboo fans) and woodcraft.

“The mayor of Gifu City at that time asked him for advice on how to revive the traditional lantern-making industry,” says Chikahiro Shinoda, the director of Ozeki & Co Ltd, the Gifu-based lantern manufacturer that has been producing Akari lamps for 62 years now.
Founded in 1891, Ozeki produces handcrafted lanterns and lighting devices. The Akari series makes up only 15% of its production while the company’s main revenue comes from Obon (Festival of the Dead) and decorative lanterns. Ozeki is also purveyor of lanterns for the Japanese imperial household.
Hako chôchin or the first prototype of the portable lantern – made of narrow strips of bamboo covered with paper – was introduced in Japan at the end of the 16th century. During the peaceful Edo period (1600-1868), lower-ranking samurai made lanterns and wagasa to make ends meet. But with the advent of electricity and gas in the late 19th century in Japan, demand for lanterns dwindled. (Information from Japanese Crafts by the Japan Craft Forum, Kodansha International, 1996.)
Noguchi conceptualised Akari as a “light sculpture” with a practical purpose. He coined the name “akari”, which means “light as illumination” in Japanese, also implying lightness as opposed to heaviness.
He wrote: “The light of Akari is like the light of the sun filtered through the paper of shoji. The harshness of electricity is thus transformed through the magic of paper back to the light of our origin – the sun – so that its warmth may continue to fill our rooms at night.”
Born in Los Angeles to an American mother, Leonie Gilmour, and a Japanese father, poet Yone Noguchi, the sculptor spent his childhood in Japan before returning to the United States for his education. Throughout his life, Noguchi shuttled between homes in America and Japan and straddled the two cultures effortlessly.
For Akari, he melded the simplicity of Japanese aesthetics with the principles of contemporary art and design.
In the biography The Life Of Isamu Noguchi (Princeton University Press, 2004), author Masayo Duus wrote that the lanterns might have reminded Noguchi of living with his mother and father in Tokyo as a toddler. On dark nights when little Isamu could not see the reflection of “Mr Moon” on the shoji (sliding, wood-framed door covered with rice paper), his father would bring in a lantern covered with translucent white paper from his study. When Isamu saw its comforting light he quietly drifted off to sleep. 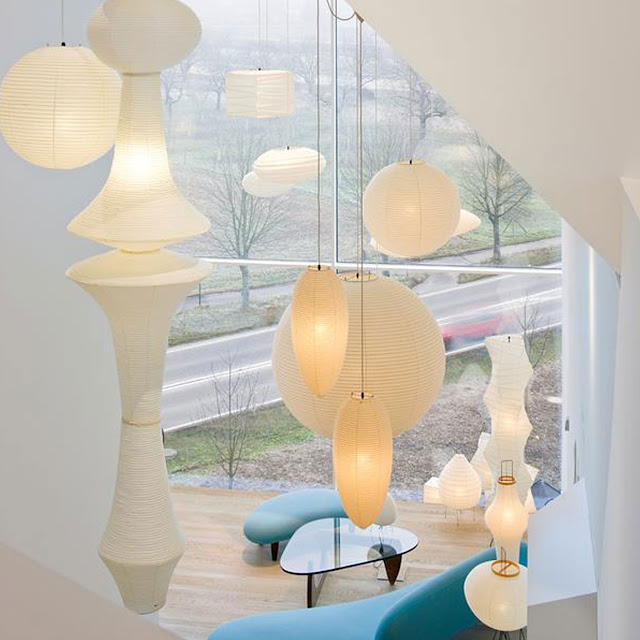 During the tour of Ozeki’s workshop, master craftsman Akio Suzumura demonstrated how the lanterns are made. Each Akari is handcrafted, from the making of washi paper (derived from the inner bark of the mulberry tree) to the wooden form and bamboo ribs. To make a lantern from scratch involves about 20 processes, from making the wooden frame and bamboo ribs to stretching the ribs across the frame and gluing the paper to installing the electrical components.
“Bamboo ribbing is stretched across wooden moulded forms designed by Noguchi sensei (teacher),” says Suzumura, 62. He joined Ozeki at the age of 17 and had the opportunity to work personally with Noguchi.

“The washi is cut into wide or narrow strips depending upon the size and shape of the lamp and then glued onto both sides of the framework. Once the glue has dried, the internal wooden form is disassembled and removed.”

Based on his sketches, Noguchi created the prototype lamps using polystyrene foam. Then the craftsmen shaped the wooden frames following his forms.
“He was very involved in the whole process and he learned lantern-making from the craftsmen,” says Suzumura, one of three lantern artisans in Gifu recognised as a master craftsman by the Japanese government.

“What struck me was, Noguchi was gentle, down-to-earth and had no airs about him, even though he was a famous artist,” he adds. “He made us feel like we were old friends.”
Although Ozeki assembles the lamps, the installation of electrical components is outsourced. The bamboo ribs/wire (higo) are sourced from Kumamoto Prefecture in Kyushu. The company replaced the use of handmade washi with machine-produced washi about 20 years, Shinoda says.
“It would be too expensive to produce the Akari using handmade washi. Besides, the quality of machine-made washi is comparable to handmade ones these days,” he explains.
In The Life Of Isamu Noguchi, Noguchi says that “the Akari lamps are not status symbols. They are evidence of taste that does not depend on whether one is rich or poor. They add to the quality of life, and they fill any world with light.” In fact, an Akari table lamp sold for US$6.95 in an emporium in New York in 1964, according to a New York Times report. Today, the same table lamps retails at about US$100 (RM321.55) at the Noguchi Museum in New York.
Noguchi sums it up best: “It’s the one thing I’ve done out of pure love.” Akari wasn’t created for commercial reasons. However, each time he created a new Akari, he was trying to prove something – that it could be better. “So I was always working on it.” 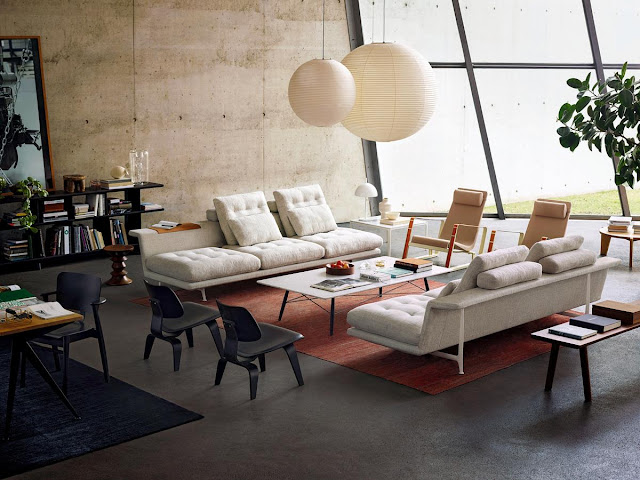 The oeuvre of Japanese-American artist and designer Isamu Noguchi (1904–1988) is unusually multi-faceted. In addition to sculptures, he also created stage sets, furniture, lighting and interiors, as well as outdoor plazas and gardens. As a sculptor, his interest was not restricted to materials and form, but also extended to spatial effects and interior designs. Noguchi intended his art to serve both practical and social functions, and his sculptural style exerted a lasting influence on the idiom of organic design in the 1950s.

The Akari Light Sculptures are marked with a stylised sun-and-moon logo, which also resemble the corresponding Japanese characters. They guarantee the authenticity of each product.