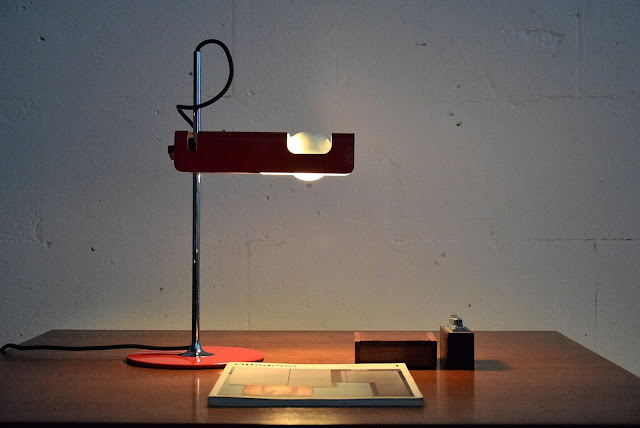 Everything you always wanted to know about Oluce's Spider Table Lamp designed by Joe Colombo in 1965.  Colombo's Spider was awarded with the Compasso d'Oro in 1967. Designed to provide light as well as showcase it, the Spider Table Lamp is a modern light fixture that features a functional and unique design. Made from aluminum with either a black or white finish, the lamp head is attached to the stem by a plastic joint that allows for it to be tilted side-to-side. When illuminated, this modern floor lamp provides direct light perfect for use next to a desk or lounge chair. The Spider Table Lamp is part of the permanent collections of the Milan Triennale, the Philadelphia Museum of Art, the Kunstmuseum of Düsseldorf, and the "Neue Sammlung Museum" in Munich.  The especially chic Spider 291 table lamp is a real classic! At the time the Spiders were invented, a special horizontal direct spotlight was what everyone had been looking for.


Due to their melamine joint the Spiders were capable of being placed in various spaces and onto various bases: The first lamp family was born. The 40 year old design is as present today as it was then.

The diffuser of this numerously awarded lamp can also be swung around its glossy chrome-plated stem and adjusted in height, thus meeting very need. This lamp is manufactured as limited edition.

The Spider Table Lamp is a Joe Colombo design.   Born in Milan in 1930, designer Cesare Colombo—who went by Joe—was the second of three brothers. His father, Giuseppe, was an industrialist who inherited a ribbon factory and turned it into an electrical conductor manufacturer. Colombo came to design relatively late, having spent most of his twenties pursuing painting and sculpture. He studied at the Accademia di Belle Arti in Brera, Milan, in the early 1950s. While there, he joined the Movimento Nucleare, an avant-garde art movement founded by Enrico Baj and Sergio Dangelo in 1951. Spurred on by international anxiety surrounding the nuclear bomb, this group of painters aimed to break free of the static boundaries of traditional painting. In 1953, Colombo made his first foray into design by creating a decorative ceiling for a Milan jazz club. In 1954, he made a series of television shrines for the Milan Trienniale. Inspired by these experiences, Colombo enrolled as an architecture student at Milan Polytechnic. When his father became ill in 1958, Colombo abandoned painting altogether; he and his younger brother, Gianni, took over the family business, using the factory as an experimental space for the latest production techniques and materials, including fiberglass, PVC, and polyethylene. In 1962, Colombo opened a design studio in Milan, from which he worked primarily on architectural commissions—including several ski lodges and mountain hotels—as well as product design. His furniture designs were characterized by optimistically bold, round forms, and he championed the notion of using modern technologies to create new design solutions. Colombo’s design career was cut tragically short in 1971 when he died of heart failure at age 41. However, he was remarkably prolific during his near decade as a designer. Notable projects include some of the most iconic designs of the 1960s, such as his 1963 Elda Armchair, made completely of fiberglass; the 1964 Ragno outdoor light, which doubled as a seat; the stackable Universale chair (1965/67), which came in varying heights and was created completely from polypropylene; his 1967 modular furniture series known as the Additional Living System, which was composed of different-size curved pieces that could be pinned together in various configurations to form chairs, sofas, or entire living areas, and which ultimately included the famous 1969 Tubo lounge chair; and the Optic alarm clock and Bobby trolley (both 1970).


let's take a look at a vintage joe colombo spider table lamp by oluce in orange:


and another vintage oluce spider table lamp in blue: