Having graced the desks of libraries, banks and even the desk of one of the latest James Bond flicks featuring Daniel Craig and Judi Dench (see inset), the PH 4/3 Table Lamp (1925) is one of Poul Henningsen’s most recognizable lighting designs. Constructed by Louis Poulsen, the original manufacturer, it features a shade with 3 layers of varying sizes and shapes to direct light both horizontally and vertically. Striking in form but compact enough to be used in multiples or as a classic desk lamp, this versatile design is suitable for residential and commercial spaces. Bulb (included): 100W/A19/. UL Listed. Made in Denmark by Louis Poulsen.


When you hear the name Louis Poulsen, you think distinctive modern Danish lighting. From the classic icons of the 1920s to more recent pieces, all Louis Poulsen lighting is created based on a deep-felt respect for architecture, understanding the emotional effect of lighting and the belief that shadow is just as aesthetically important as light. All three aspects manifest themselves in the sculptural layering and comfortable, glare-free light of Louis Poulsen pendants, wall, table and floor lamps. 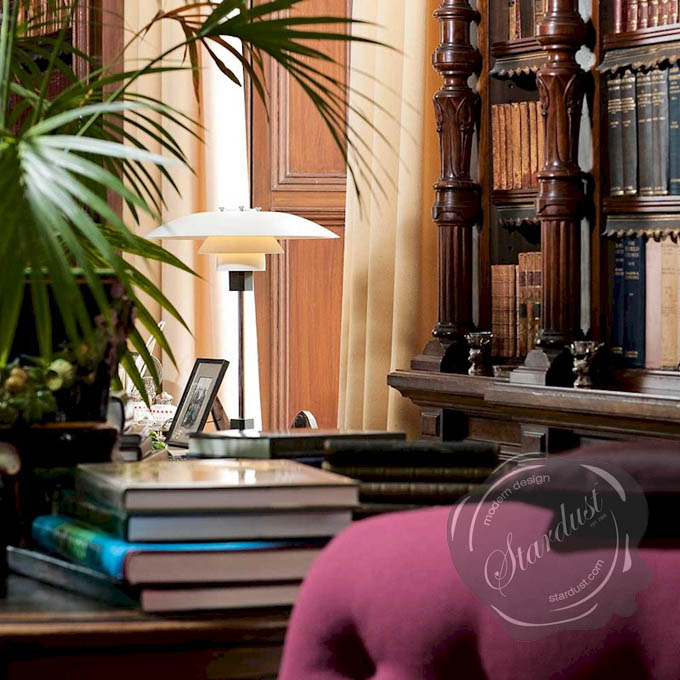 The Louis Poulsen PH 4/3 Table Lamp is only one of three PH table lamps currently in production, and the only one adhering to the metal shade composition of the original fixture.. The three-shade system is painted White to enhance its reflective properties while the base and stem are finished with a contemporary Chrome plating. Unique to this PH lamp is a distinctive accent piece - a Black Bakelite triangle, resting directly above the base of the lamp. 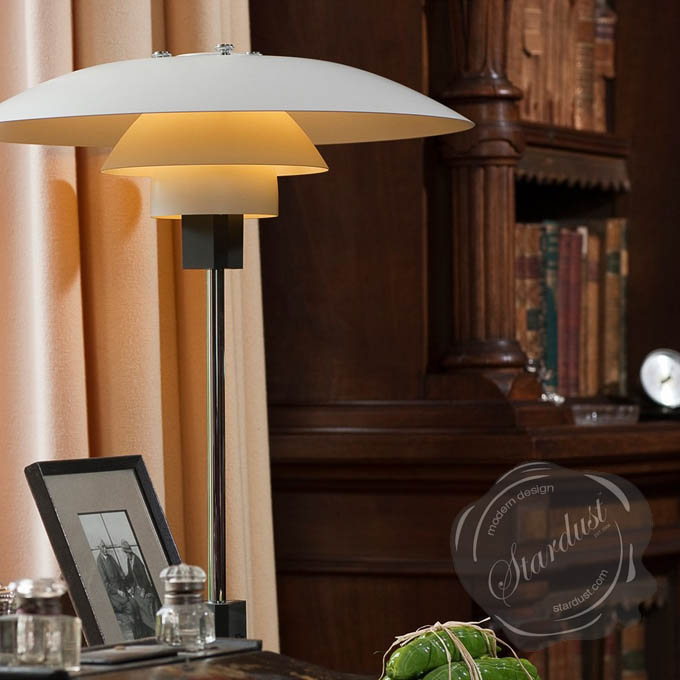 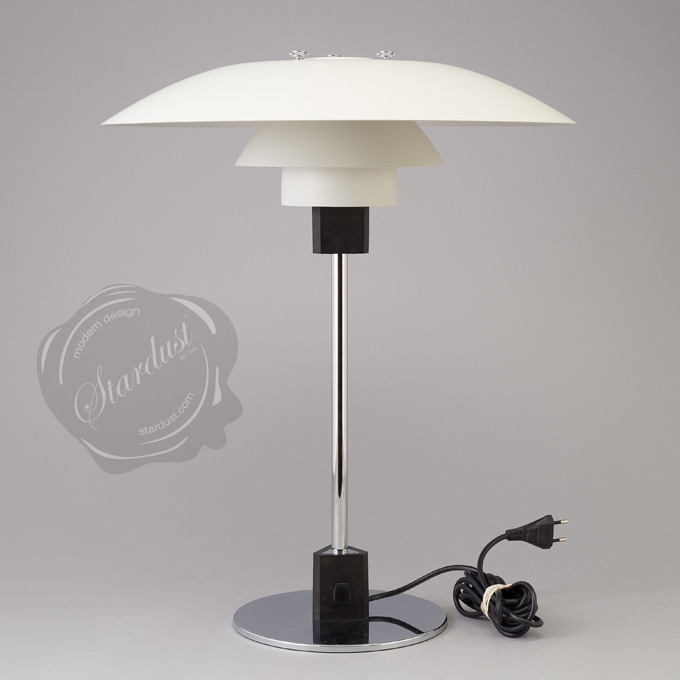 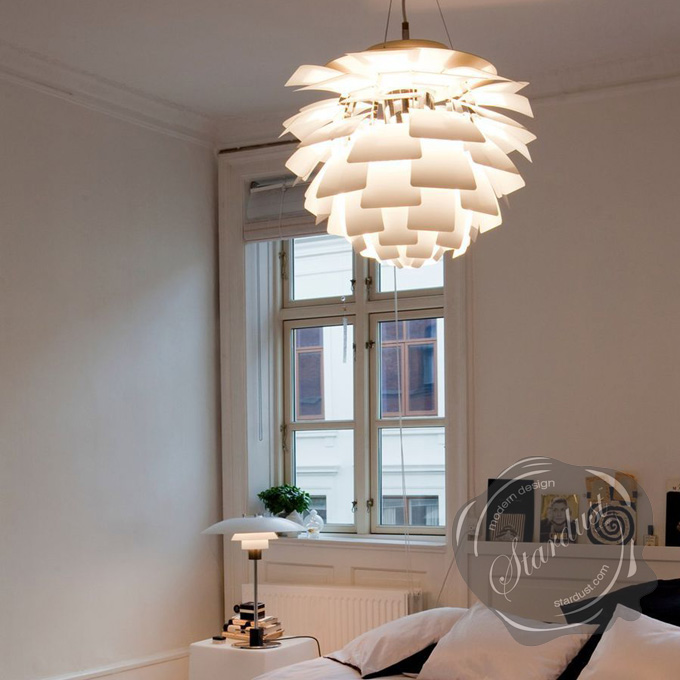 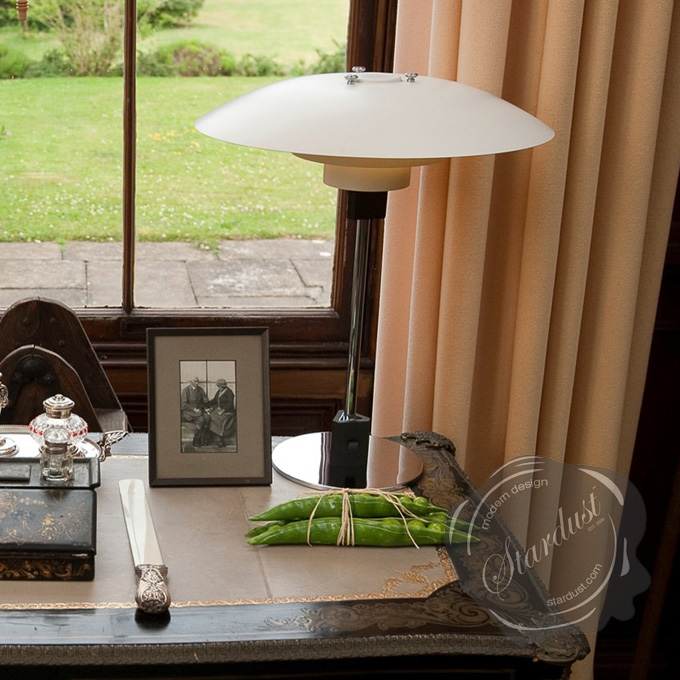 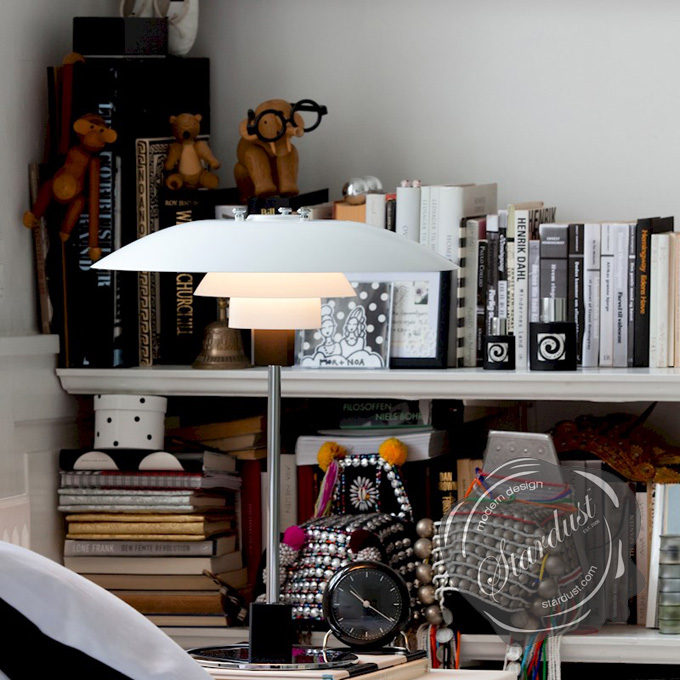 Poul Henningsen designed the three-shade system during 1925/1926. The first lights using the system were designed for an exhibition in Paris. His work with Louis Poulsen continued until his death in 1967. Throughout his life, PH sought to create glare-free lighting; aiming to direct light where it was most needed, and creating soft shadows while using incandescent bulbs as a light source. PH 4/3 Table is a member of the three-shade family and is one of 19 versions available today. Approximately one thousand different models have been produced over the years and consisted of table, floor and wall lamps, as well as a number of different chandeliers, which were popular in the 30s for lighting private homes with high ceilings.  PH 4/3 Table consists of an approximately 40 cm top shade, but uses lower shades from the 3/3 model. These hybrid models were introduced due to the desire to hang pendants at lower heights. The system was also used for wall, table and floor lamps. PH 4/3 Table in its current form was introduced in 1966. 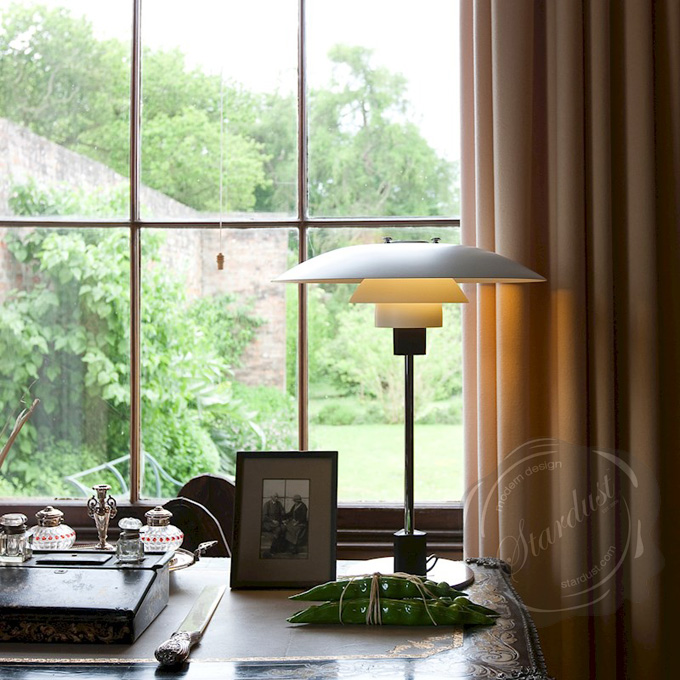 The PH 4/3 Table Lamp comes with a black cord. The on/off switch is located on the stem base. 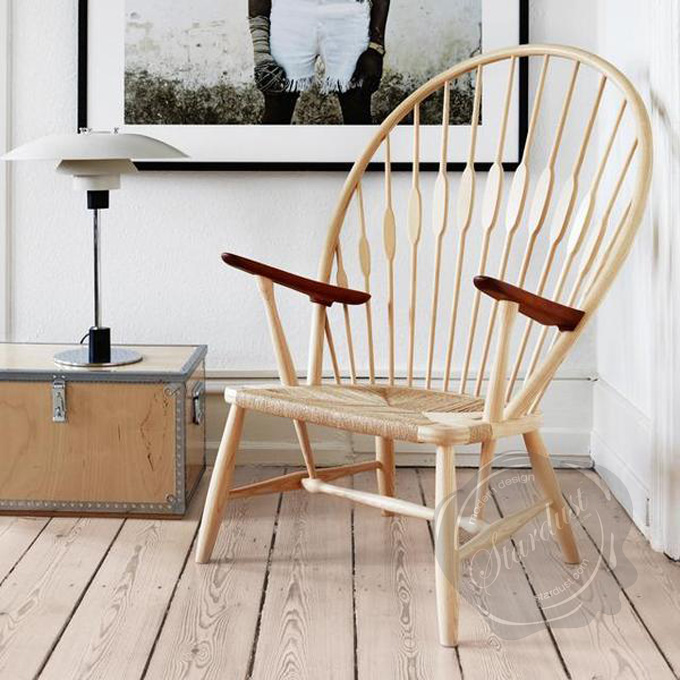 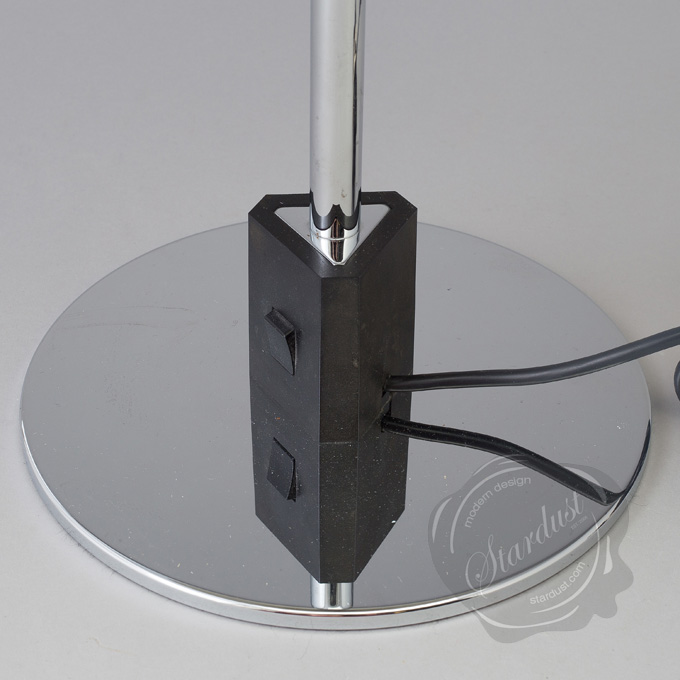 The fixture is designed based on the principle of a reflective three-shade system, which directs the majority of the light downwards. The shades are made of metal and painted white to ensure diffuse, comfortable light distribution. 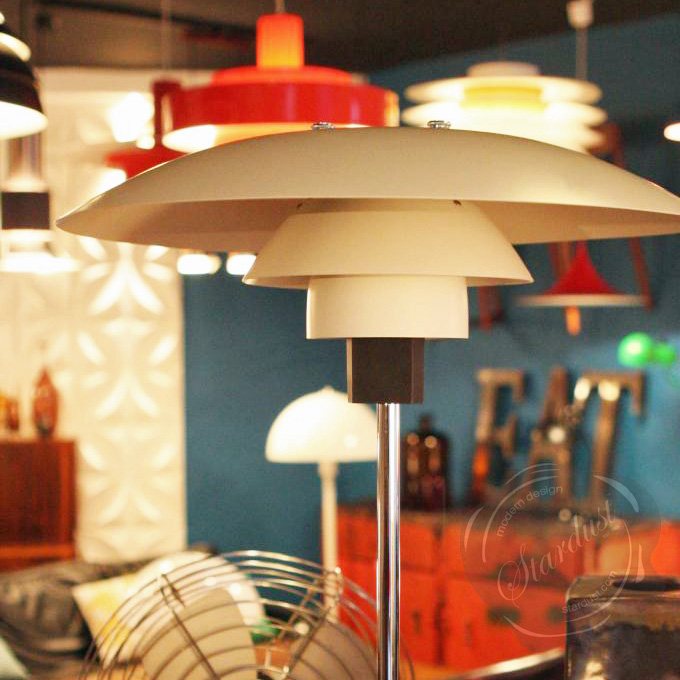 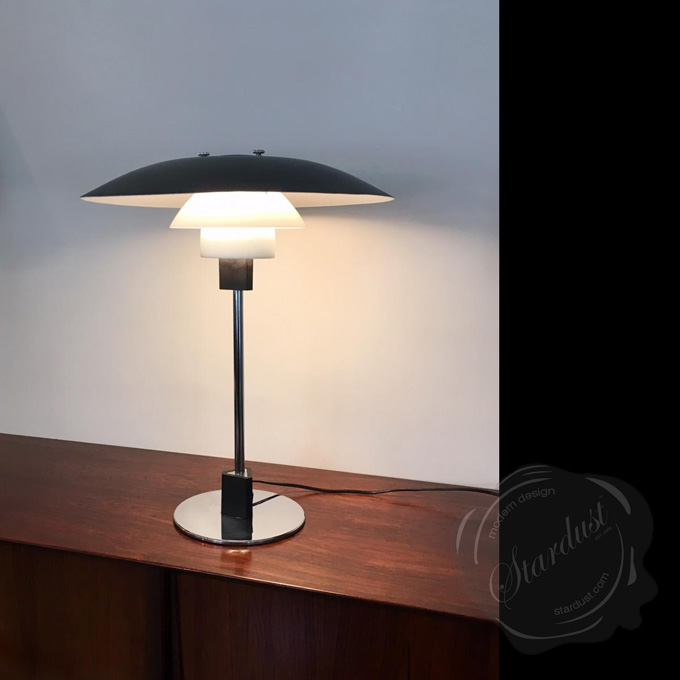 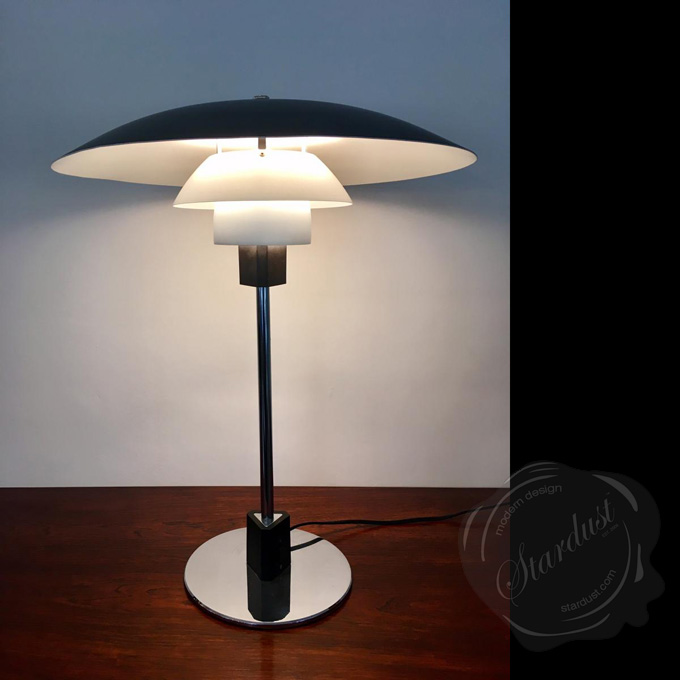 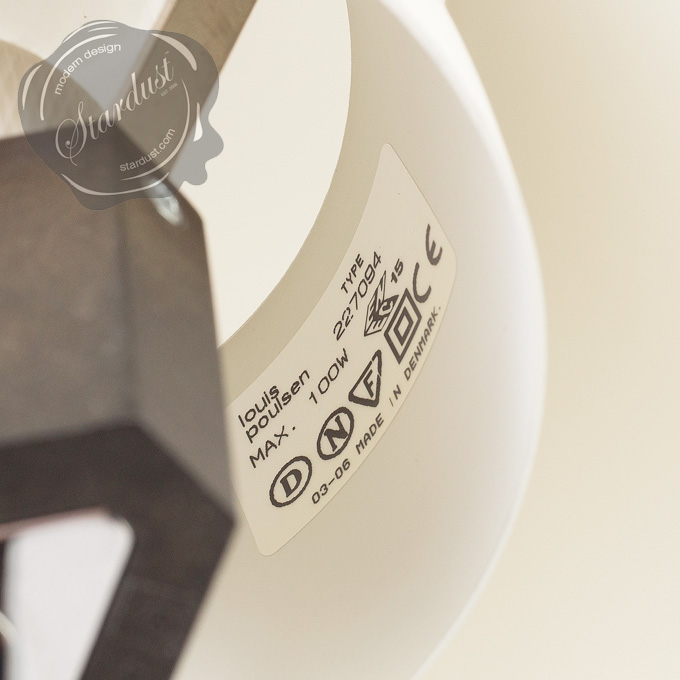 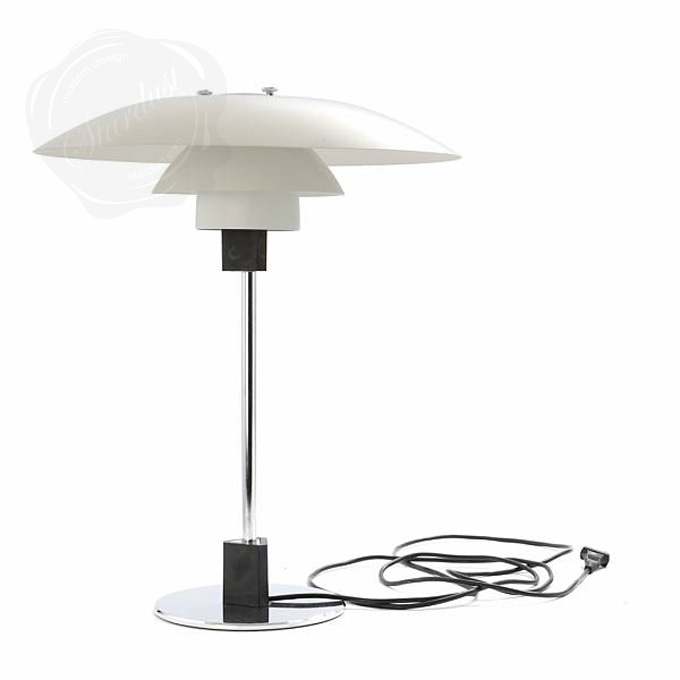 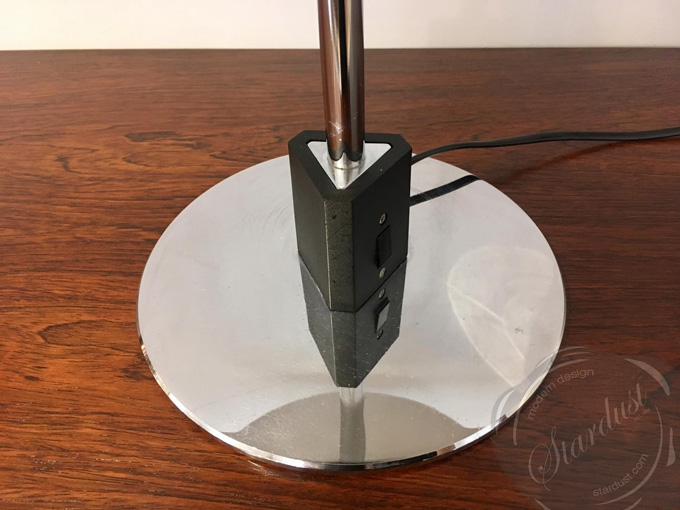 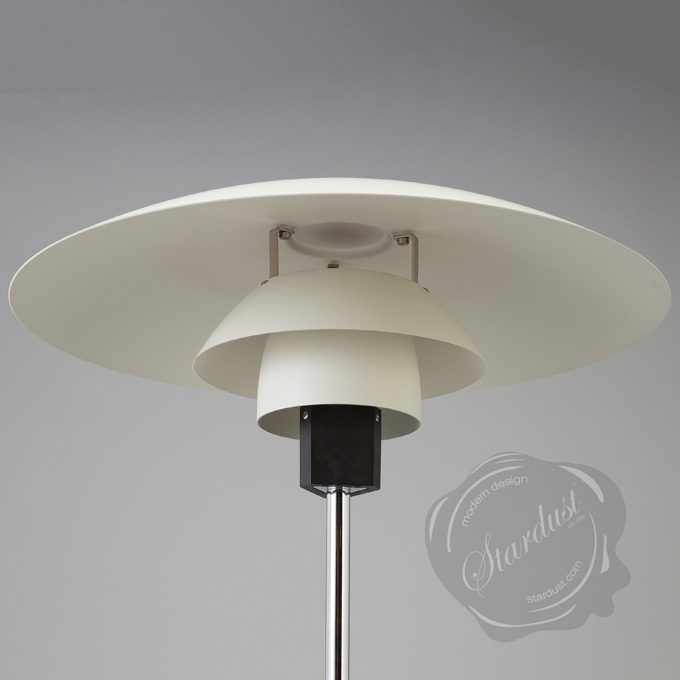 Trained as an architect, Poul Henningsen is best known for his PH 4/3 table lamp; a series of table standing lighting fixtures that resulted from his fascination with the then-new technology of the electric light bulb. In 1925, one of these fixtures won first prize for modern lighting at the International Exposition of Decorative Arts in Paris; Louis Poulsen's PH 4/3; a table lamp with a chrome polished steel stem and base topped with a triple level lamp shade; lacquered white.

The next year it was put into production by Louis Poulsen & Co. in Copenhagen, and it has been in continuous international demand ever since. Having grown up at the turn of the century in a small Danish town without electricity, Henningsen wanted to recreate the soft gas lighting of his youth with his electric fixtures. Composed of concentric tiers of reflective painted metal bands, his now-iconic PH Lamp design was carefully based on scientific analysis of a lamp shade’s function. The goal of even distribution of light and reduction of glare determined the size, shape and position of the shades. Variations of the PH Lamp design were made to accommodate various functions and spaces, and within a few years of its introduction the PH Lamp was being used in world-class institutions and homes across Scandinavia. Henningsen continued to design for Louis Poulsen well after these early successes, and in 1958 he produced yet another classic – the majestic Artichoke Lamp. Based on the same principle as the multilayered shade, the Artichoke employs leaf-like elements to compose the form. With its grand size, the Artichoke creates dramatic atmospheric lighting appropriate for elegant commercial settings and larger domestic spaces. It is a testament to the Nordic aesthetic – and Henningsen’s genius – that a group of lighting fixtures derived from scientific principles can exude such warmth, elegance and soul.